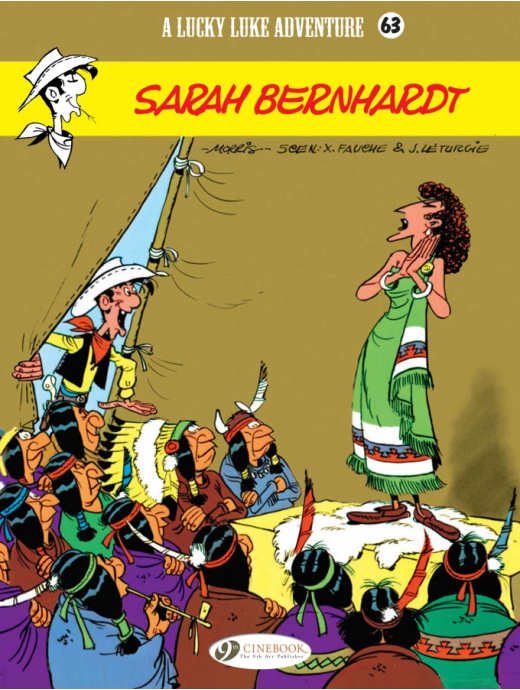 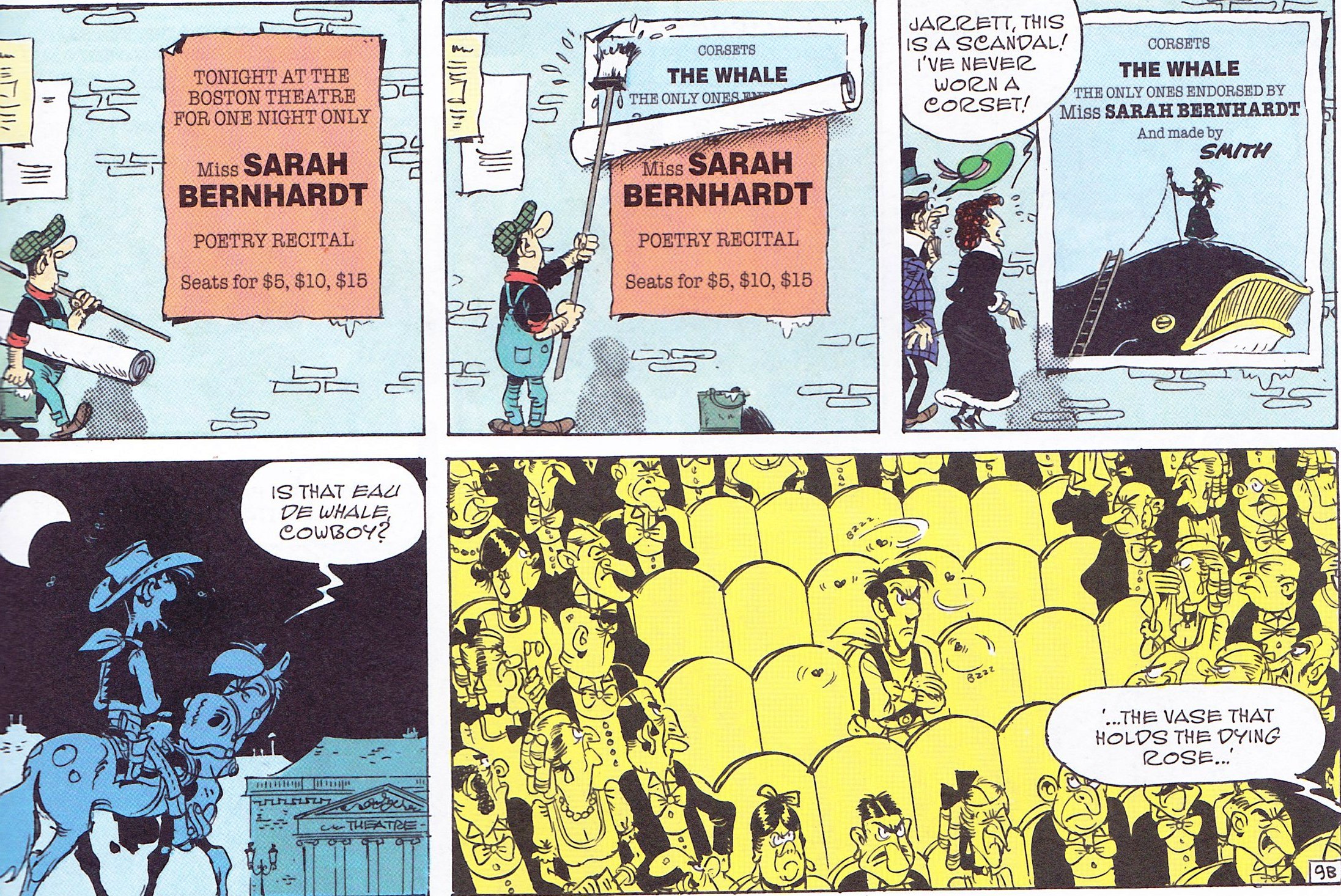 Sarah Bernhardt was an actress whose career spanned the late 19th and early 20th centuries, winning both acclaim and notoriety for her bombastic acting style and scandalous private life. Morris’ opening scenes of newspapers announcing her tour of America in 1880 wonderfully catch the strong reactions the mere mention of her name would evoke. The furore her first tour in America was such that tickets for her performance in New York went for $40 each. That was a lavish sum then, but to put it into perspective, that’s about $987 a ticket in new money, steep even by 21st Century standards. In Cinebook’s 63rd Lucky Luke album, our eponymous hero is called upon to protect Miss Bernhardt and her entourage on their tour. Those that decry Sarah as a destroyer of morals are intent on sabotaging the entire tour.

Sarah Bernhardt was created during the years when Morris had begun working with other writers after Goscinny’s death. Xavier Fauche and Jean Léturgie were frequent collaborators, and this is their first Lucky Luke yarn. It’s pretty good with a high gag content that might not always make you laugh, but will leave a wide grin on your face by the end. The writers catch the essence of Bernhardt too, known to be a diva. Do a little research before reading, just to gain an appreciation of just how well she is scripted, while Fauche and Léturgie have a keen understanding of human behaviour that enriches the tale. In one setting a pastor warns his largely male congregation to avoid Bernhardt’s evils, only to send them frantically purchasing tickets as soon as they are outside.

It’s thanks to Morris’s art that the script works, and he is in fine fettle. The pages bustle with activity straight away even down to little details like flies buzzing in the air or a subtle expression. The bars are crowded, the theatres filled with people of all descriptions, and the trains rattle along the tracks. A crack about how the damp affects horse Jolly Jumper’s mane would simply not work without Morris. Each character is clearly defined, the scenery and iconic photos of Bernhardt masterfully recreated. He too has Bernhardt’s measure, her dramatic expressions and fiery temper rendered very well. Luke’s secondary mission of discovering the saboteur in her entourage is easier than ensuring her safety. His and Jolly’s efforts leave them looking exhausted, Morris drawing them as haggard. This is the last time Luke is actually seen smoking, and the running gag is that Sarah drives him to it before loudly voicing her disapproval. Morris and the writers play it well, the joke usually at Luke’s expense.

All in all, Fauche and Léturgie do very well and provide a surprising plot twist. The honours do go to Morris who elevates the story an entire star with his artistic wizardry. His art alone makes it worth acquiring Sarah Bernhardt. While Cinebook follow it up with the decent The Wedding Crashers, Fingers (published in 1983) was the next European Lucky Luke album, and even better, so the wise choice is track that down first.