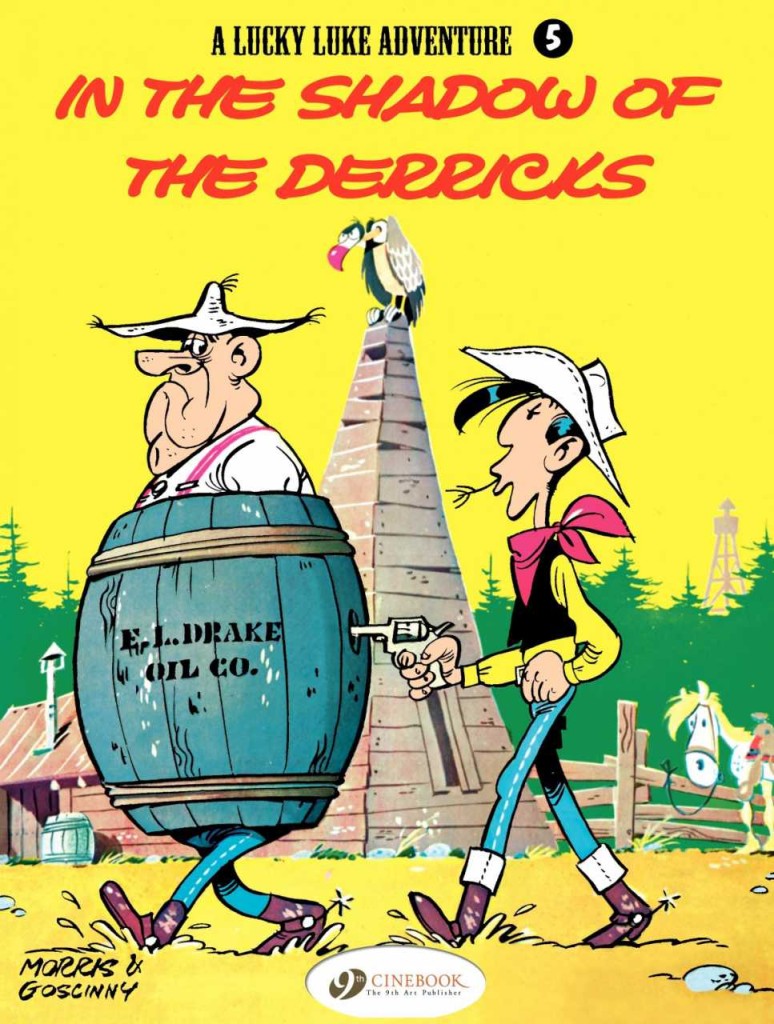 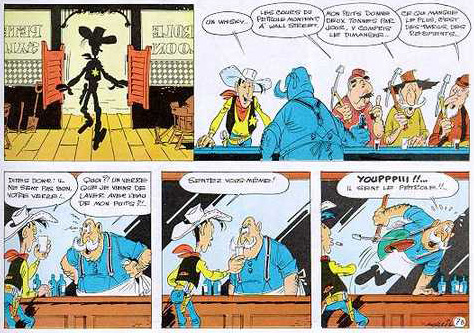 In the Shadow of the Derricks, by artist Maurice de Beverè, aka Morris, and writer René (Asterix) Goscinny, opens with a short history of the petroleum industry, beginning with the bother this useless and often poisonous liquid could cause, before the realisation that oil had its uses. It proceeds with the arrival in Titusville, Pennslyvania, in 1857, of Colonel Drake, the man responsible for building the world’s first oil well.

Then we witness another ‘rush’, similar to the gold rush seen in the Lucky Luke adventure Ghost Town, and Titusville’s bigwigs decide to call on the services of the only lawman capable of preventing their town descending into a maelstrom of sin and debauchery: Lucky Luke.

Luke joins the exodus heading east and, on arrival, tries to do his best in a town where everyone disappears at the slightest whiff of oil. Then our villain appears, Barry Blunt of Texas, and of all the no-good, worthless scumbags Luke’s had to face, he’s the worst type imaginable: a lawyer. Okay, strictly speaking he’s an ex-lawyer, but he uses his knowledge of the letter of the law to circumvent the spirit of it (when he’s not just an out-and-out criminal). Using every underhand method at his disposal, Blunt becomes owner of most of the town’s oil wells, and employs the impoverished ex-owners at slave wages.

Goscinny would, as in the Asterix books, use these stories as a platform to lampoon or satirise various and diverse targets. This book has a strong green message, and highlights the damage done to the environment by the oil industry. And Barry Blunt is clearly a thinly veiled satire of the methods and morals of big business, with a sprinkling of additional contempt for lawyers.

Some of the artwork is a little rough, and Blunt in particular is quite badly drawn throughout. However, Morris is generally a skilled artist who manages to impart a widescreen cinematic feel to many scenes, while using lots of clever colouring to supply depth elsewhere. Like all the Lucky Luke books, this is very well researched, accurately depicting the setting and era.

This is one of the earlier scripts provided by Goscinny, and while not among the best of the series, it’s nevertheless an enjoyable, action-packed and amusing romp through the birth of the oil industry in the company of a loveable cowboy and his wonderfully-named horse, Jolly Jumper.