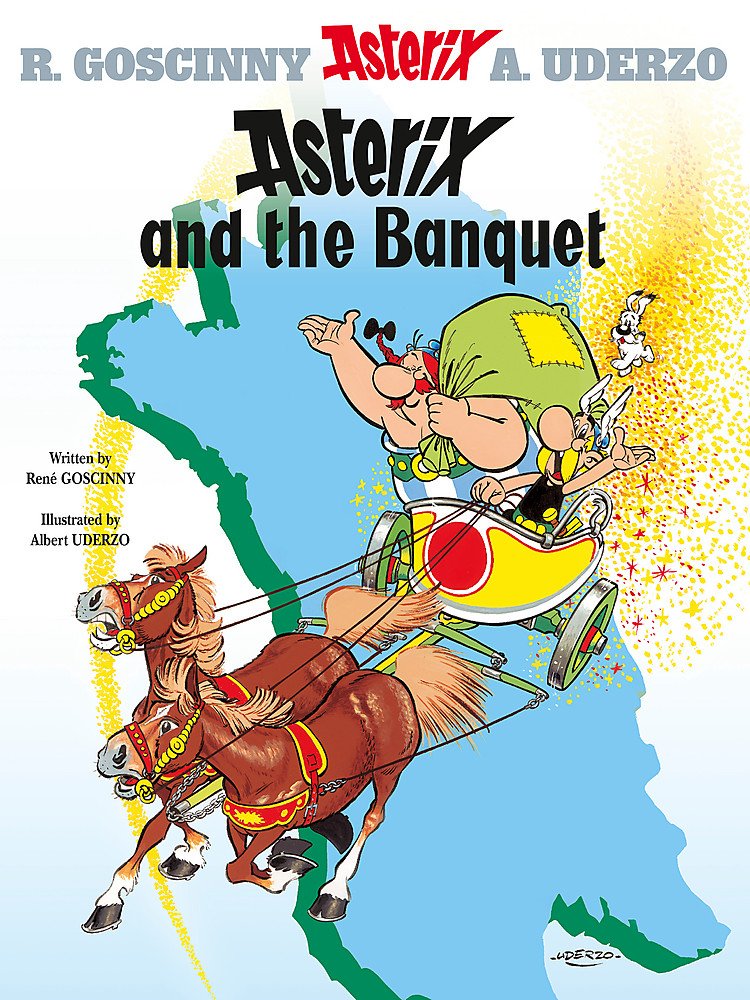 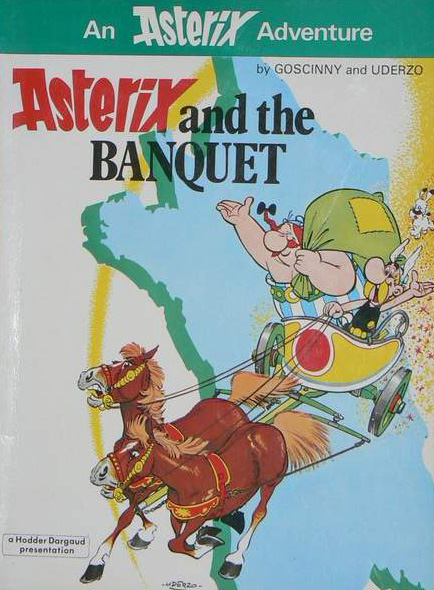 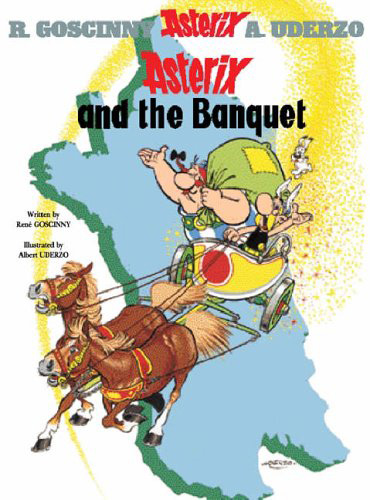 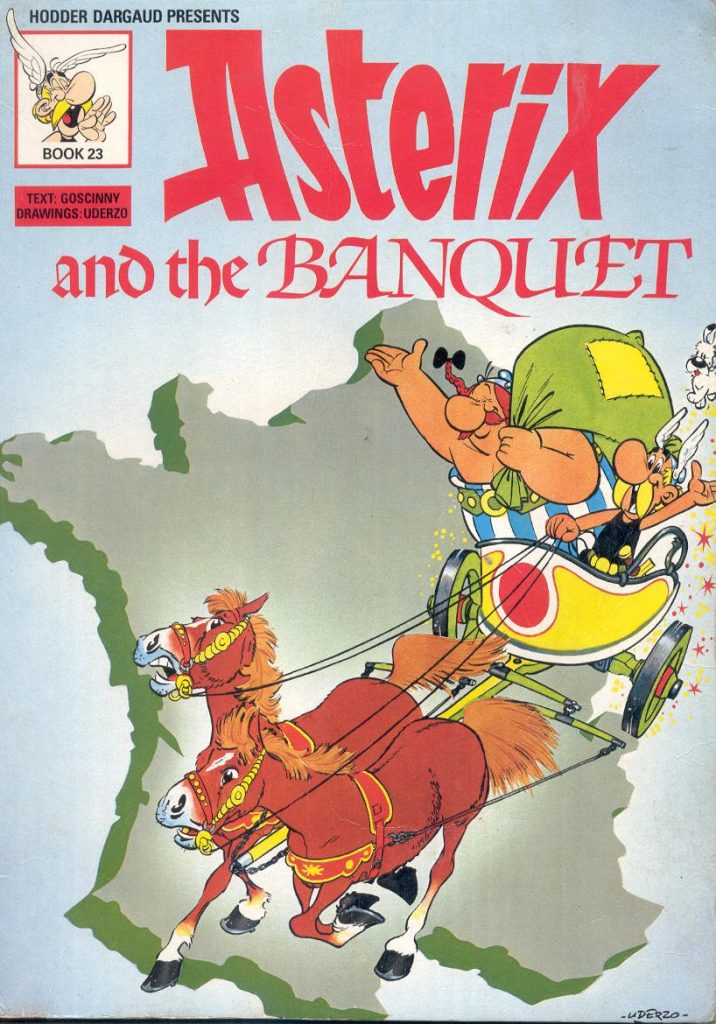 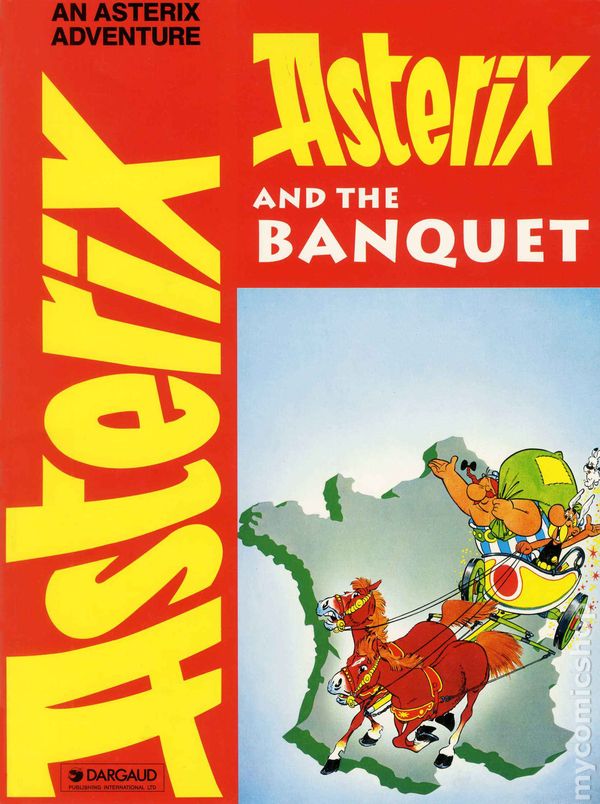 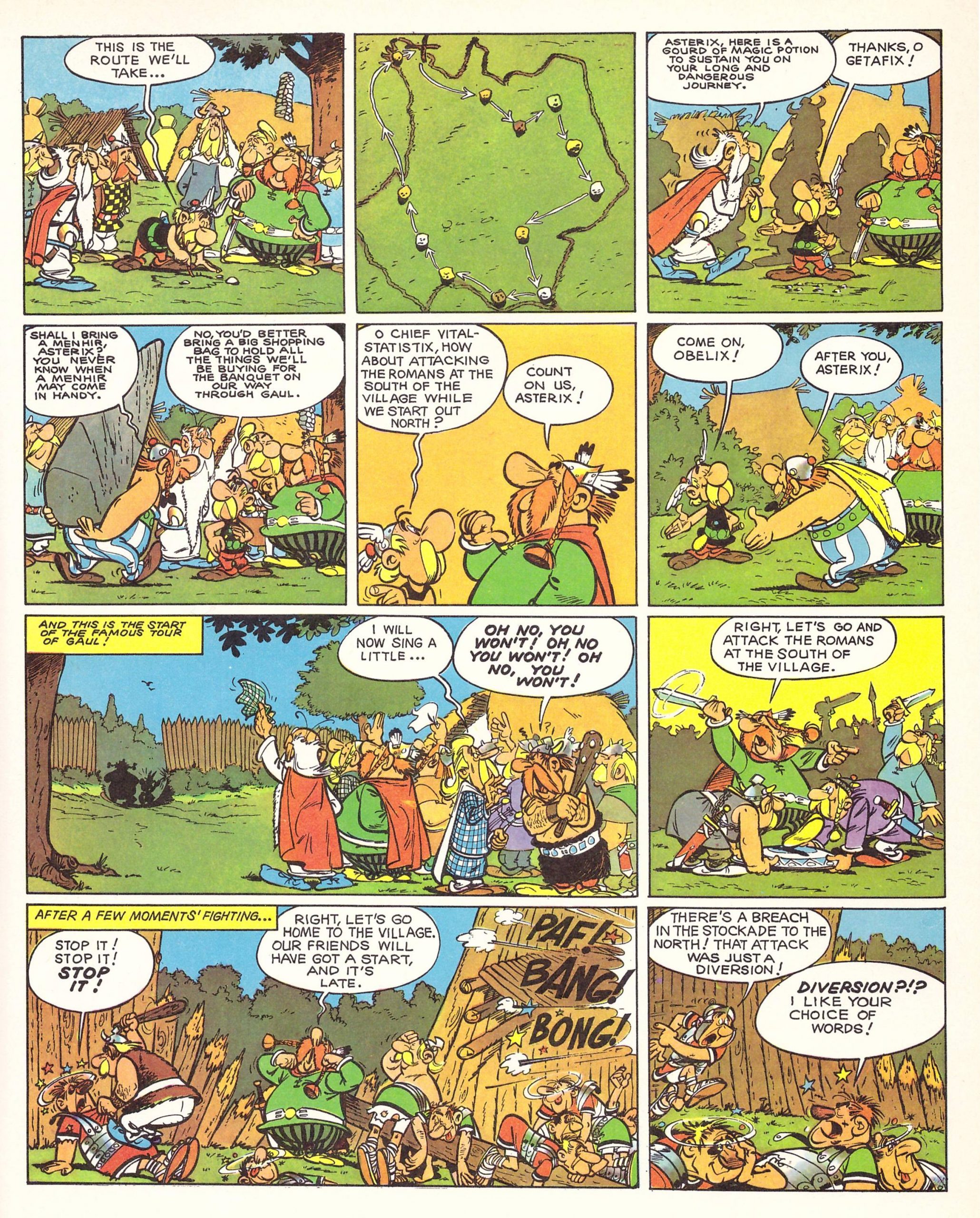 This, the fifth Asterix book by artist Albert Uderzo and writer René Goscinny, was inspired by the Tour de France. In fact, the bag Obelix carries throughout the adventure is yellow (though it appears green on the cover) to mirror the cycle race leader’s famous jersey.

Our story kicks off when Inspector General Overanxius arrives in Compendium, the Roman camp with the misfortune to be closest to Asterix’s village. After an ill-advised attempt to subdue the Gauls by force, the Romans build a large stockade around the village. Asterix, irate, challenges the prefect to a bet. He vows, in spite of the stockade, to leave the village and tour the entire country collecting local delicacies. His point, to prove that he can go wherever he wants in his own country. Overanxius agrees, promising to remove the stockade and return to Rome should Asterix succeed.

Asterix and Obelix duly set off (barely hindered at all by the stockade) and begin their colourful tour, collecting food, trouble and support from patriotic Gauls as they travel from town to town. This being an Asterix book, there’s never any real likelihood of our heroes not accomplishing what they set out to do, but all the fun is to be had in the clever way the stories are executed. We have encounters with the world’s unluckiest pirates, amusing displays of Obelix’s strength and Asterix displaying his usual guile to evade the Romans that hound them constantly. Although one has to wonder why the Romans bother, each time they catch up to Asterix and Obelix, they get soundly thrashed by our Gallic dynamic duo.

And it was at this point that the duo became a trio. Eagle-eyed among you may notice the little dog sitting outside a butcher’s in Lutetia. When Asterix and Obelix leave said butchers, the little dog follows them for the rest of the book. This is, of course, Dogmatix, who, while the villagers enjoy their ubiquitous banquet in the background, moves into the foreground in the final panel, having just been adopted as Obelix’s pet, winking at the reader as he runs off with a big bone clenched in his jaws.

As well as the introduction of Dogmatix (who wouldn’t be named until the next book, Asterix and Cleopatra), we first meet the gag, which would run and run, about Obelix’s reaction to being called fat.

The artwork has lost the roughness of earlier volumes, and the amount of detail in each panel is impressive, with Uderzo avoiding the blank backgrounds that proliferate in some similar strips. No matter how much was going on, the compositions are flawless, with the artist making good use of speed lines, stars and sound effects, some of them strangely French – THAC!

An interesting footnote is that our indomitable Gauls didn’t actually complete the bet, apparently missing Rotomagus and Divodurum, something that both the Romans and Gauls choose to ignore, and something which one suspects most readers are unlikely to notice.

Though not one of the best – readers would have to wait a few years yet for that – this is nevertheless an enjoyable romp through Roman-occupied Gaul, one that serves up, alongside prunes, oysters and cheese, lashings of dynamic action, clever plotting and jokes that may or may not make sense depending on your age, nationality or how good your education was. However, if you can accept that you probably won’t get all the jokes or references, these books still have appeal enough to be enjoyed by everyone.