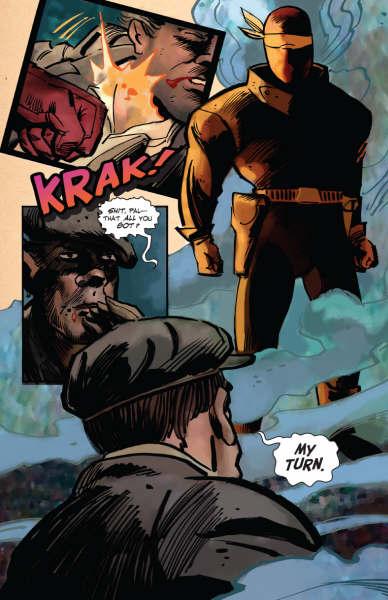 Vigilante Lone Justice protects the city of Hooverville from threats to its peace and prosperity, the darling of the people and the police alike. Or is he?  A maniacal villain named Scion wreaks havoc intent on killing Lone Justice, the resultant destruction raising the question of whether Justice has the interests of the people or his own ego in mind.

Behind the scenes other events conspire against our hero. Lone Justice is really playboy millionaire Octavious Brown, one of the wealthiest men in the country and a descendant of Hooverville’s founding fathers. Well he was until Black Thursday (the historical start of the Great Depression), a decadent lifestyle and lack of wisdom leaving him flat broke. So broke there’s no money to fuel his gadgets, and the grand mansion house he lives in and operates from has been seized to consolidate his debts. Forced to turn to friends, family, former allies and even enemies for help, he discovers that his excesses as Octavious and elitist ideas as Lone Justice have progressively alienated him. Octavious ends up in the slums with the people he thought were the city’s problems, uncovering levels of police corruption and organised crime he was unaware of or just chose to ignore. When he confronts it as Lone Justice he becomes a public enemy. Seeing things as they really are, Lone Justice has become the only justice some people have, but with Scion’s influence growing, the gangs strengthening, the media and police hounding him, will he be able to make any difference?

Co-written by creators Robert Tinnell and Mark Wheatley, with Wheatley illustrating, Lone Justice is surprisingly engaging for a medium that has been out of vogue for a number of years. It is quite the story, a love letter to the old pulp magazines and digests, a blend of popular hero comics (Batman for one) and the spicy (more risqué), hero and action pulp genres. Wheatley’s art mimics the photograph and illustration style of pulp, so action is intentionally wooden and features are simple. It’s unusual, but it works, especially in charting Brown’s/Justice’s slide into anonymity and unpopularity.

The ultimate strength lies in turning the chauvinistic macho tropes on their head during the course of the story. The weak woman enlightens the hero, the suave hero taking a journey from privilege to poverty, so opposite to the norm. Rather than disengaging from reality Tinnell and Wheatley draw comparisons between the Depression era and the modern economic crash in 2009. In this way it transcends pulp to be quite the commentary on the growing gap between the haves and have-nots in recent years, particularly addressing the notion that being poor or on low income equates with being stupid.

In homaging pulp Tinnell and Wheatley have done well. It doesn’t quite capture the novelty it was in its heyday, but it is well written, brightly coloured and fans of pulp will enjoy Lone Justice and the cult collectability it has garnered since its publication. Volume 1 ends on a dramatic cliff-hanger that continues in Lone Justice Volume 2.