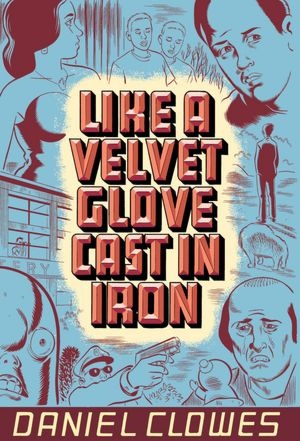 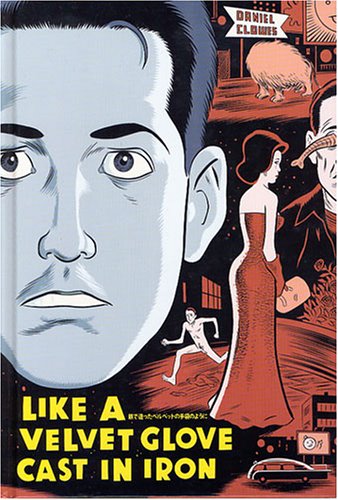 Dan Clowes’ Like A Velvet Glove Cast In Iron began life as a serial in Clowes’ Eightball comic, debuting in 1989. From the first chapter it was obvious we were in very strange territory, a dream-like world of sexual fetishism and bizarre transformations with strange coincidences driving the plot. The protagonist, Clay Loudermilk, is searching for his estranged wife Barbara Allen. The name is no coincidence, and like the song from which it’s taken, Like A Velvet Glove Cast In Iron is a tale of unrequited love and loss. Loudermilk’s search takes him to a movie theatre where he views a strangely compelling S&M film staring a dominatrix who turns out to be his wife. When Clay tries to track her down he’s drawn into a world of warped humanity and paranoia populated by strange deformed creatures, vindictive policemen, religious nutcases and nymphomaniacs.

Like A Velvet Glove is a repository for so many of the ideas Clowes would look at in more detail in later works, but it lacks the depth of human understanding he displayed in works like Ghost World. It’s crammed with symbolism, references to popular culture and cult cinema – the title comes from Russ Meyer’s sexploitation flick Faster Pussycat, Kill, Kill! – and throws in references to Lovecraft’s Cthulhu Mythos, the Nazis and the mugging of CBS anchorman Dan Rather for good measure. Very much in the vein of TV series like Twin Peaks (which it predated) and films like Blue Velvet it was perfectly pitched to appeal to hipsters at the dawn of the 1990s.

Clowes’ art is startling, generally very spare with heavily spotted blacks, echoing the cool horror movie references and woodcut illustrations of Charles Burns’ work, but at times he produces intensely detailed portraiture that is truly beautiful. His visual handling of emotions is very cloaked in this early work – the words do the work of involving you in the characters, while the visuals are often there to startle by juxtaposition or simply to shock. Well designed pages and wonderful individual panels stick in the readers’ memory, and while you can see a lot of influences behind Like A Velvet Glove, and it is in some ways overabundantly stocked with weirdness, it remains an overwhelming and exceedingly strange graphic novel that taps into all sorts of modern neuroses.

While not Clowes’ masterwork, this is an intriguing and necessary read for anyone interested in the artist’s work, as it contains the seeds of so many later preoccupations including the meaninglessness of late 20th century culture, as well as being extremely stylish and extraordinarily warped.