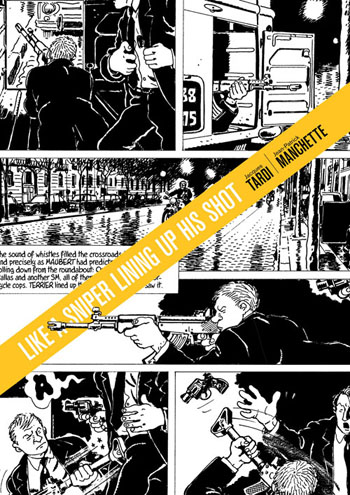 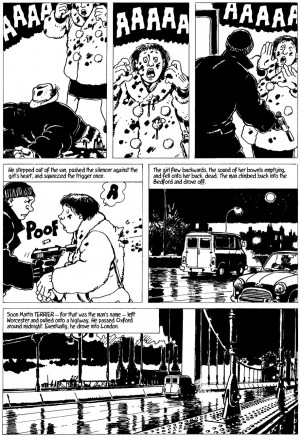 Martin Terrier is an assassin who’s arrived at the point at which he decided a decade previously he would settle his affairs and revisit a promise made then. In the manner of all crime fiction, there are complications.

Terrier is a resourceful, remorseless and relentless man, brutalised and emotionally stunted. He appears to believe the world he departed has remained static awaiting his return, but life has a way of waking you up and slapping you around the face. The girl he loved at sixteen was manipulative then, and in the decade since has cultivated her callous personality to the point that the shocking events that overtake her life only appear to prompt a derisive contempt for Terrier and his world. His former employers, about whom Terrier cared very little, have resources beyond his comprehension and are unwilling to lose a reliable asset.

This is Jacques Tardi’s second adaptation of a Jean-Patrick Manchette novel to be translated (excellently, by Kim Thompson). Both are great, and there’s little joy in either. West Coast Blues delivered George Gerfaut, a character every bit as unpleasant as Terrier adapting to the world Terrier revels in, while Terrier has to adapt to the circumstances Gerfaut found himself in. The greater world view is of everyone’s strings being jerked somewhere along the way, so how much control do we really exert over our own life? This extraordinary bleakness and ruthless brutality is softened somewhat by Tardi’s art. It’s faithful to the original novel to the point of setting a relatively timeless story in the era it was published (1970s), complete with utterly compelling period detail. Tardi’s cast are delivered in broad cartoon strokes; eyes reduced to dots, and the perma-scowling Terrier only a few missing speed lines removed from Tintin.

Some elements are plain bizarre, seemingly without metaphorical context, and as such mere whimsy. Is, for instance, Terrier losing his voice meant to represent the power slipping from him? Once events are set in motion Terrier’s fate would appear inevitable, and so it proves, but, as promised on the back cover blurb, in a manner more disturbing than any reader will imagine.

In 2015 the basis of the plot was used for the Sean Penn and Javier Bardem film The Gunman, and 2022 it was combined with Run Like Crazy, Run Like Hell as the second Streets of Paris, Streets of Murder.