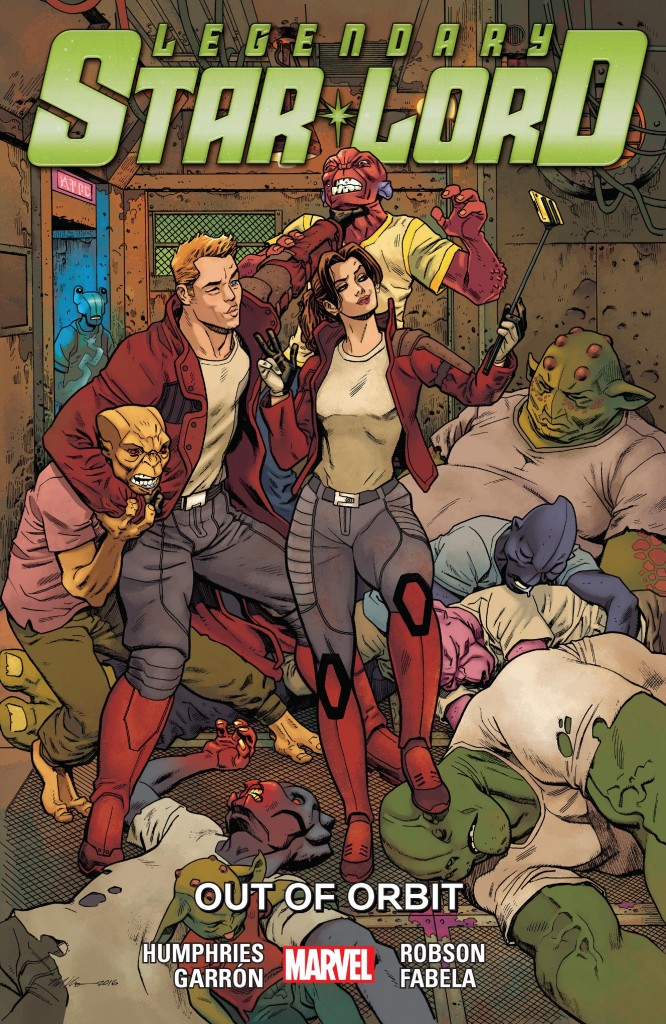 After the interlude of First Flight filling in Peter Quill’s earliest days in space we’re now back to the present day where his relationship with Kitty Pryde isn’t going well. In fact, were you to ask either of them, they’d say it was completely over, and people have asked them, as seen over the opening chapter, and when even their best friends can’t persuade them to see sense then over it would appear to be. That, however, doesn’t account for the intervention of the Collector, now more resembling his camp movie incarnation, and his troupe of Skrull dramatists. Counselling under those circumstances might not be the best option, but the Collector’s not going to let it lie.

Sam Humphries has the whimsy button set high, and there are some funny low comedy moments, but the whole saga seems too much like people playing roles. The method of telling the story never allows for a genuinely tender moment. Well, it does, but amid the slapstick it doesn’t have the time to deliver an emotional punch. This is coupled with artist Javier Garrón, so good on First Flight, here experiencing a few wobbles. The layouts are fine, packed and interesting, but some of the faces are oddly proportioned and flat. It’s a combination that drops this book considerably below its predecessor.

To compound matters, three new chapters are all we get. Don’t really have much interest in the Avengers of the 1960s and 1970s? Well that’s too bad as there are as many episodes of them as there are of Star-Lord, which will be an unpleasant surprise for those who’ve picked the book off the shelf and taken it to the counter without looking closely.

The Avengers are featured as that’s where the Collector has traditionally appeared. This is the old version, with scraggy grey hair and purple cloak. By today’s standards none of the stories are great, and with artists Don Heck and Dave Wenzel hardly sparkling, and John Buscema considerably under par there’s not even the compensation of some fine old art. Those who like Hawkeye get full value as he has a starring role in each of the three stories, but this is a Star-Lord graphic novel, and this material is cheap padding exploiting those wanting to follow his continuity.