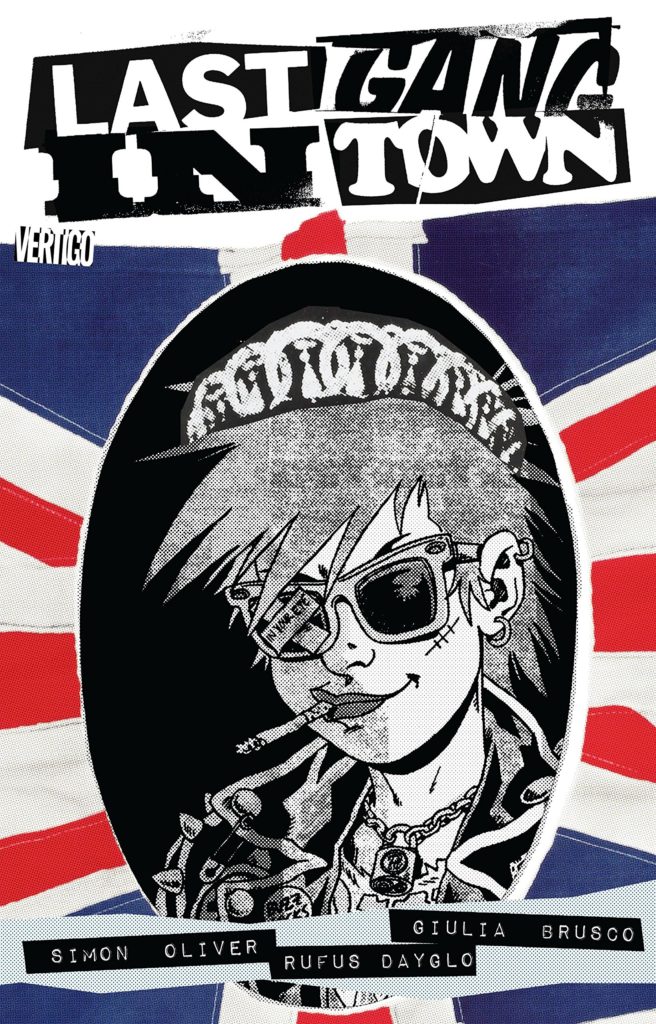 The heavyweights of punk music’s mid-1970s success recognised the value of self-mythologising as a viable promotional technique, and as their associates and fans drifted into middle age in the 21st century mythologising became almost the only literary view offered. Thankfully Simon Oliver doesn’t entirely buy into that, using another punk standby of opportunism to propel an almighty kick against the pricks.

It’s fascinating that American company Vertigo published Last Gang in Town as it’s wilfully British, more specifically London English. It seems designed as the uncompromising reaction to the cultural imperialism of so many movies and TV shows where the uniquely American is passed off to the world as universal. So much will just fly over the heads of US readers as Simon Oliver and Rufus Dayglo perpetuate the punk ethos while simultaneously distilling Oliver’s youthful influences and current prejudices. Figure out saveloys, two planks and Reg Varney, America! Side dishes include a 1960s detour, some situationism and working through a Michael Caine obsession. And it’s hilarious how some cockney rhyming slang is given subtitles, but the fruitier phrases remain arcane.

From the distance of 2018 Oliver looks back to 1960s London and 1970s punks as a backdrop to his story of a bunch of misfits adapting punk’s do it yourself principles for crime instead, with outrage the prime motivator. Fictionalising actual events, stealing from Caine’s movies and conceiving many of his own stunts, Oliver concocts a capricious romp around the idea of the final big score being the blaze of glory.

More so than many artistic collaborators, Dayglo’s an equal partner in crime, also channelling the British past, his style pure anarchic Leo Baxendale by way of Jamie Hewlett. The cartooning is as self-aware as the writing, Dayglo on one page adding a kitchen sink to an already richly detailed scene, and scattering punk era slogans over the pages.

Last Gang in Town is designed as puerility drawing attention to societal injustice, as prevalent now as when the punks briefly thrived. Anyone happy with the way life is today will find it a cheap holiday in someone else’s misery. If you’re not, here’s a chord.