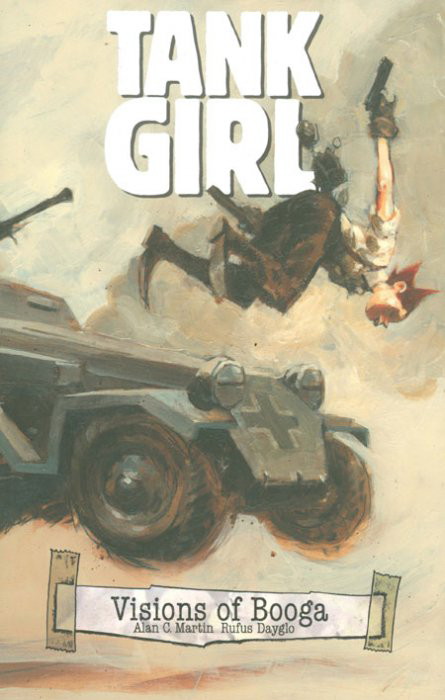 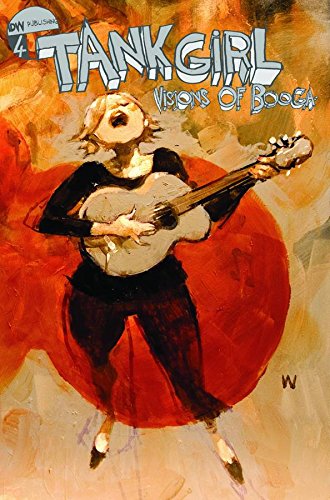 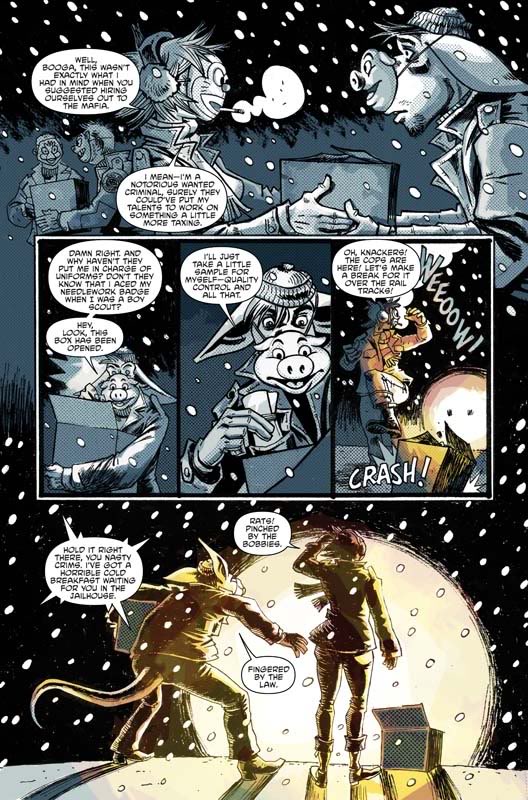 Visions of Booga’s artwork might remind you of virtual band Gorillaz music videos. That’s because Tank Girl co-creator Jamie Hewlett co-founded Gorillaz and is responsible for creating front man 2D and the other band members, later inviting Booga’s artist Rufus Dayglo on board to work on the animation. The story goes that Dayglo asked Tank Girl writer and co-creator Alan C. Martin why he didn’t write any more of the series, Martin replying that he didn’t have an artist. Dayglo stepped in and said now you do. For purist fans of the original Tank Girl, this is probably as close as it’s going to get outside of the collected Martin/Hewlett stuff and honestly, it really isn’t that bad. In fact it’s surprisingly good.

Having never let a lack of coherency stop a Tank Girl story before, Martin’s plot (such as it is) is told in flashback by Tank Girl. She and Booga (her mutant kangaroo boyfriend) are down on their luck, sign on for a heist with the Australian Mafia (TG is set in a post-apocalyptic Australia), become patsies for the mob when the head of the mafia Willyman (“snigger”) makes a deal with the head of Police known as Chief. To make matters worse, they also upset notorious gang leader Benjamin “The Surgeon” Daniels when they piggy-back off his jailbreak. With all three parties hunting them, TG and Booga travel incognito to Sunny Bay to meet with Booga’s long lost brother, things going hilariously and irreverently pear-shaped.

Martin bangs a script together that sends up the post-modern infatuation with hipster culture, eastern religions and having a simpler life without trading money or luxurious mod-cons. The dialogue is clever sharply observed sarcasm centred on an imagined hippy tome ‘The Book of Hipster Gold’. It’s irreverent, inappropriate and hilariously funny! If you don’t mind close-to-the-bone insults, references to bowel movements, knob jokes or sexual innuendo. The plot appears constructed on a page by page basis, working where it shouldn’t much the same way Monty Python and the Holy Grail does – it’s bat-poo crazy and the participants are having a blast.

If you’ve never appreciated Gorillaz signature animation, you probably won’t like this. If you happened to think it was revolutionary and forward thinking than you might enjoy a similar yet more brightly coloured style on a pop-art background. It’s elegantly simple and stylishly detailed at the same time, the colours vivid and sharp. The violence is out there, as zany as it is stylised, and the attitude to it appears lackadaisical. If Martin and Dayglo were taking themselves seriously that would be worrying, instead it becomes a parody of modern expectations that gratuitous violence is needed in a comic or film before we can consider said feature any good.

Despite what the cover suggests, this isn’t a grown up version of Tank Girl. Thank the comic book deities for that! You could never put a finger on just what Tank Girl was when Martin and Hewlett helmed it, and you can’t do that here either. You’ll love it or hate it, a cult-classic within a cult-classic. Tank Girl has been described in various places as disorganised, anarchic, subversive, surrealist and Visions of Booga is all those things in its own way. Above all, it’s stark-raving madcap fun!