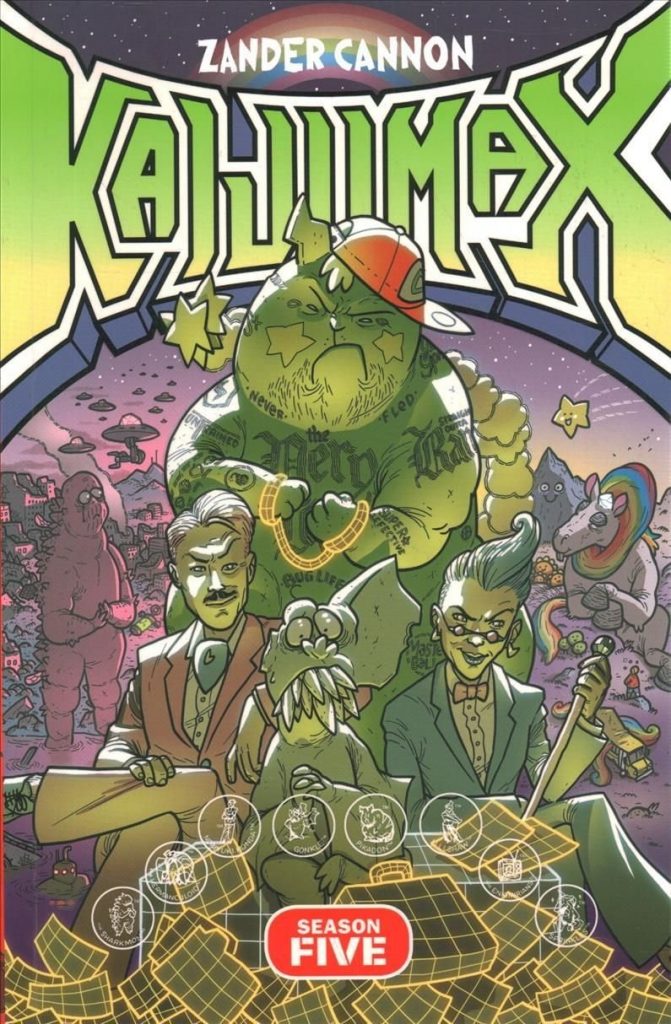 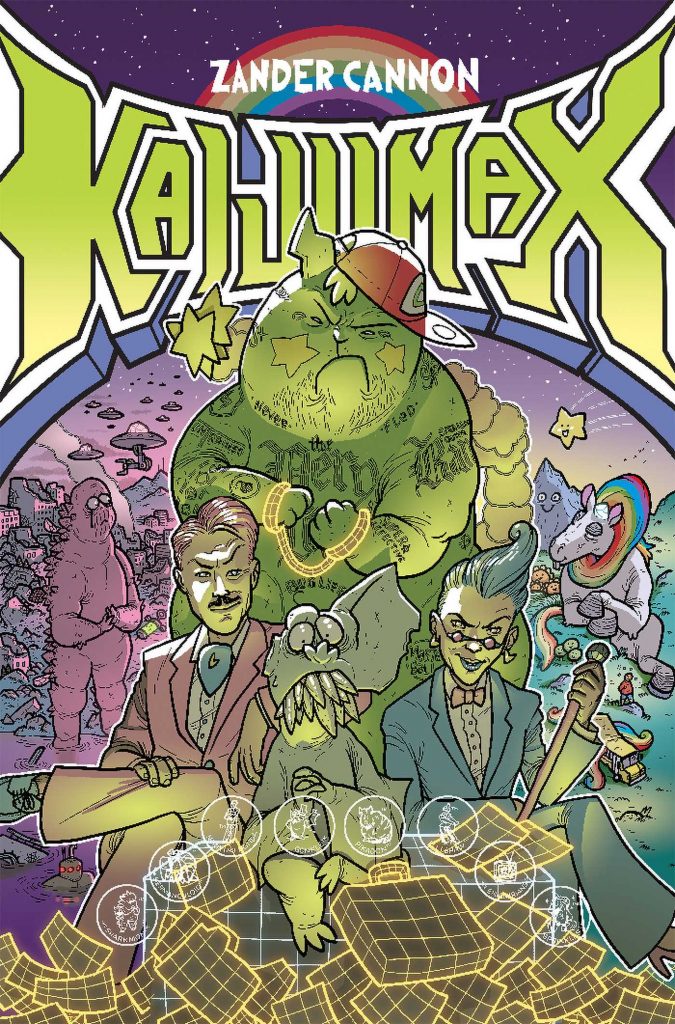 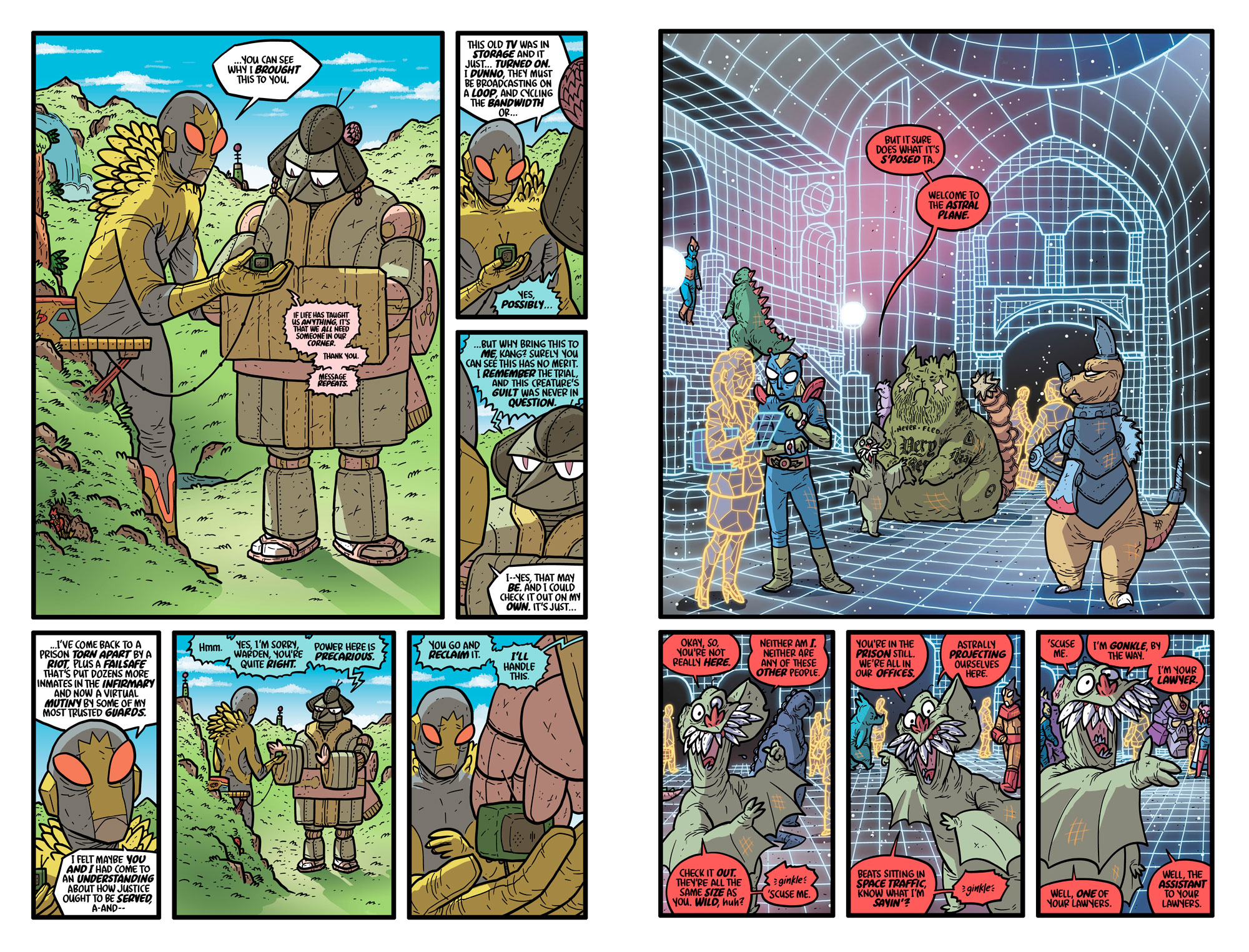 Writer/artist Zander Cannon has been exploring the question that you thought about for five seconds while watching Ultraman, Power Rangers or Godzilla, and then forgot: what happens to all the giant monsters after they’ve been defeated? His answer is Kaijumax, a maximum-security prison, guarded by heroes who transform into super-powered Ultras or pilot giant mecha suits to keep the criminal Kaiju in line. The intriguing results of his genre mashup of prison drama and monster movie have generated four graphic novels filled with brilliantly devised and executed drama in logical, bizarre and surprisingly harrowing detail. The juxtaposition of Cannon’s brightly coloured, goofily animated, perfectly unreal drawings with his darkly cynical plotlines creates a powerfully compelling, dramatically extreme environment where almost anything can happen to anyone. Each book explores a different angle of this premise and with book five we come to that staple of all crime procedurals: the courtroom drama.

It’s Law and Order: Kaijumax style, following two main storylines. The planet’s worst convicted murderers, held down in the subterranean caverns that house Death Row, await execution unless their appeals work out in their favour. The giant crab Hermanculoid will die in weeks unless his lawyers can prove an unsavoury miscarriage of justice, but that would mean the arresting officer had falsified evidence decades ago. His case hangs on the testimony of by-the-book, straightedge administrator Nobuko Matsumoto. She’s a stickler for correct procedure, so if anyone has the moral rectitude to root out collusion or corruption she’s the one to do it. This could be the break he needs, but for one unfortunate detail… And then there’s the beefy citrus-coloured gangster Pikadon. His name and appearance are a hilarious riff on the star of a very intensely loved multi-media franchise, gone very wrong and jailed for many violent atrocities including the heinous murder of an unarmed young boy. What kind of twisted backstory could explain his crimes? The truth is all here in this book, but you might be sorry you asked.

The Orange Mile takes us on another trip through the moral maze that Zander Cannon has erected around his set of monstrous protagonists and once again, when you think you have a character all figured out, new information pulls the rug out from underneath you. The imagery is bizarre and dynamic, the storytelling is ingenious, and you will really want to know how these two plotlines are resolved. The connections with Scaly is the New Black are few, but back in the prison there are also a few jolting revelations involving other inmates and guards previously seen, including a couple of truly massive reversals of fortune. Scores are settled, alliances are redrawn and when you reach the end of this volume, the next one can’t come soon enough.