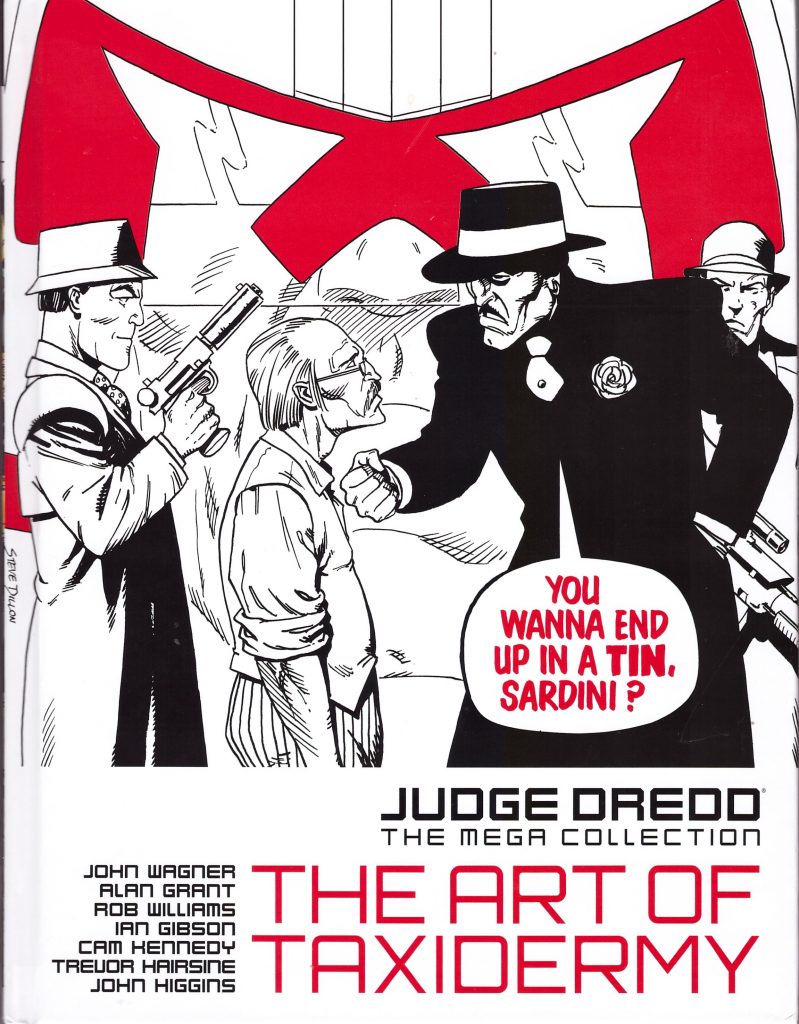 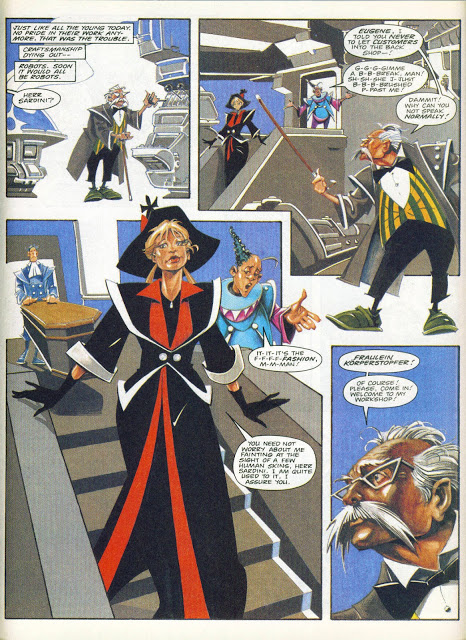 The bulk of this collection is three tales of the unfortunate Jaco Sardini, a man who’s taken the art of stuffing corpses for display to new heights. His introduction, illustrated by Cam Kennedy, slots into the rich vein of dark humour with which John Wagner and Alan Grant infused the Judge Dredd strip during their peak years. That first strip features the life-threatening circumstances of a gangster wanting some work carried out, and that’s followed by Sardini entering the Olympics to display his talent, gloriously drawn by Ian Gibson (sample page). A third appearance is going through the motions, however, and fails to match Sardini’s previous heights. They’ve also been collected as The Taxidermist, and a more detailed review can be found by following the link.

As stuffing corpses is a speciality item even in Dredd’s world, most of the remaining content concerns itself with undead corpses, with varying degrees of success. Although slight by their high standards, the best of them is by Grant and Wagner, benefiting from the artistic precision of Cliff Robinson, which is quite heart-rending in places. Even the less subtle ‘Night of the Rad Beast’, drawn by Carlos Ezquerra, has an element of pathos. It’s a combination the other writers aren’t interested in, and it leaves their material lacking an emotional core.

Rob Williams compensates with whimsical excess in the second longest story, that of Darren Dead, eccentric detective. It’s rambling and superficial, as Williams lacks either the courage or experience for some emotional honesty, but with the art of John Higgins it looks far better than it reads. His colouring is very effective, vivid and bold.

Grant alone is accompanied by ugly art from Shaun Thomas, whose style can’t disguise a lack of basic technique on a very slight story, and while Al Ewing and Andrew Currie’s ‘Harry Sheemer, Mon Amour’ is also slight, it compensates with some comedy finesse and better art.

The two opening strips are the Wagner/Grant team on top form matched by Ian Gibson and Cam Kennedy’s art, and they occupy half the book. Given the cover price of this hardcover volume is considerably lower than that of The Taxidermist, which is additionally out of print, The Art of Taxidermy should be seen as a desirable replacement despite the variable quality of the back-up strips.