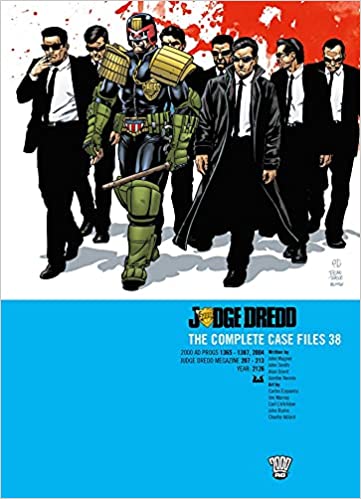 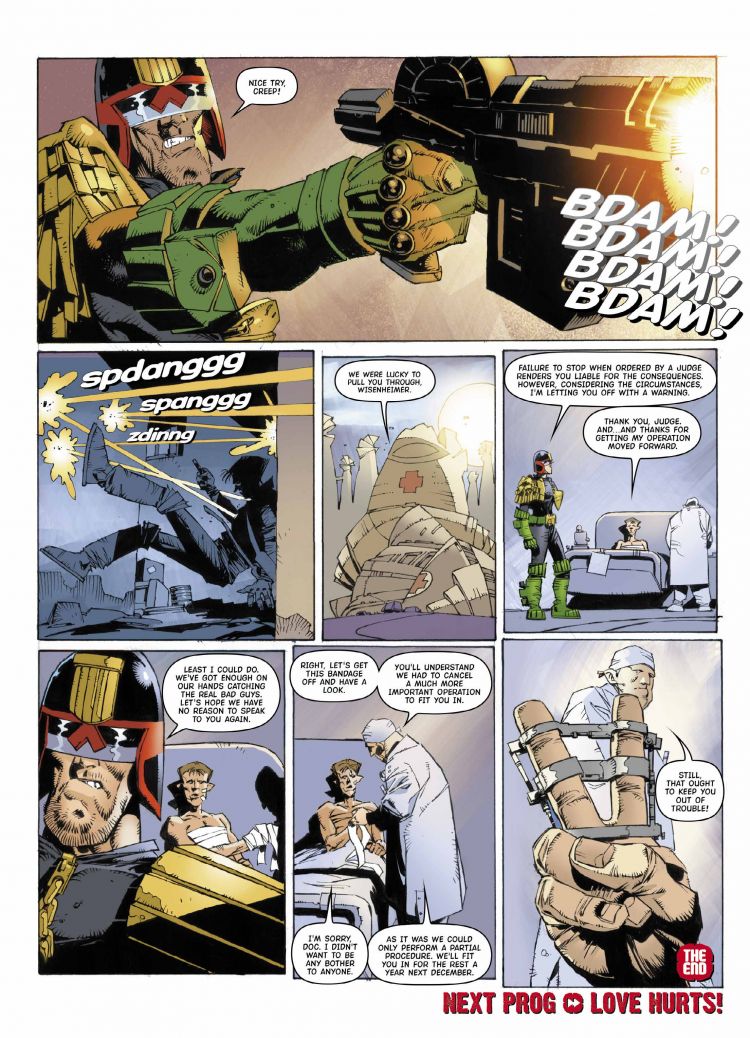 It’s good to see the return of the story titles alongside the Judge Dredd logo and credit boxes, after a mysterious absence from the last two collections. They don’t add anything to the stories, but it seems sensible to include them. Opening pages are laid out to accommodate them, and one doesn’t have to keep checking the front of the book (or section) to see who wrote and drew what. Though they’ve now dropped page numbers. Sigh!

The Complete Case Files 38 contains a dozen stories, kicking off with ‘Meatmonger’, a chunky slice of Dredd that’s the book’s longest offering at six parts. Siku’s version of Dredd’s helmet is removed from the way it’s drawn by every other artist, but it works and the artwork is bold and modern, even if it’s not always clear what’s going on. John Smith’s story is fun, with a couple of pithy one-liners in a tale of extra-terrestrial butchers that (spoiler alert!) meet their match in Dredd.

‘The Good Man’ is a clever standalone Christmas story by John Wagner that toys nicely with readers’ expectations. Jim Murray’s art looks suitably festive. Then it’s three fair to middling stories before ‘Brothers of the Blood’ by Dredd creators Wagner and artist Carlos Ezquerra. It focuses on Dredd’s aging, this features three generations of the cloned lawman: Joe, Rico, his younger clone, and Dolman, a still younger clone that’s finishing at the Academy and wrestling with his status as a ready-made replacement for Dredd. This is an intelligent and action-packed story, and a peek into Dredd’s pensive and philosophical side, which we don’t often get. When we do, it’s usually left to Wagner, and one can see why. It was the centrepiece of the Brothers of the Blood collection.

‘Gulag,’ by Gordon Rennie and Charlie Adlard, is another long story (five parts). Dredd leads a team into enemy territory in an attempt to rescue POWs held by the Sovs since the days of the Apocalypse War. It’s enjoyable tale with shades of Rambo. ‘Finger of Suspicion’ by Wagner is a short burst of silliness, with Cam Kennedy’s artwork a treat as always.

The Megazine section opens with ‘Shakedown’ by Wagner and Graham Manley, a fun if lightweight story over two parts.

‘Hong Tong’ prompts the Reservoir Dogs poster pastiche featured on the front cover. It’s a two-part tale of Dredd travelling to Hong Tong to team-up with someone he’s fought before: Johnny Woo. It’s solid, though one with few surprises, hitting all the reliable beats of the classic buddy-movie formula. ‘Sturm Und Dang’ by Rennie and Ezquerra features yet another team-up, as Dredd is forced to work alongside renegade Judge (Cursed Earth) Coburn. Dredd’s leading cadets on a Hot Dog Run into the Cursed Earth as part of their training when they get side tracked by an army of Nazi-style mutants. This is old-school Dredd at his best and toughest, with some entertaining interaction between the two lawmen, who couldn’t be more different.

The book ends with ‘Crime of Passion’ by Wagner and Cliff Robinson. It’s a silly poke at the popularity of Strictly Come Dancing and a futuristic take on life in Mega-City One.

This is another solid addition to the series. It doesn’t have many outstanding stories, but neither are there any duffers. And it’s nice to see the return of the credits.