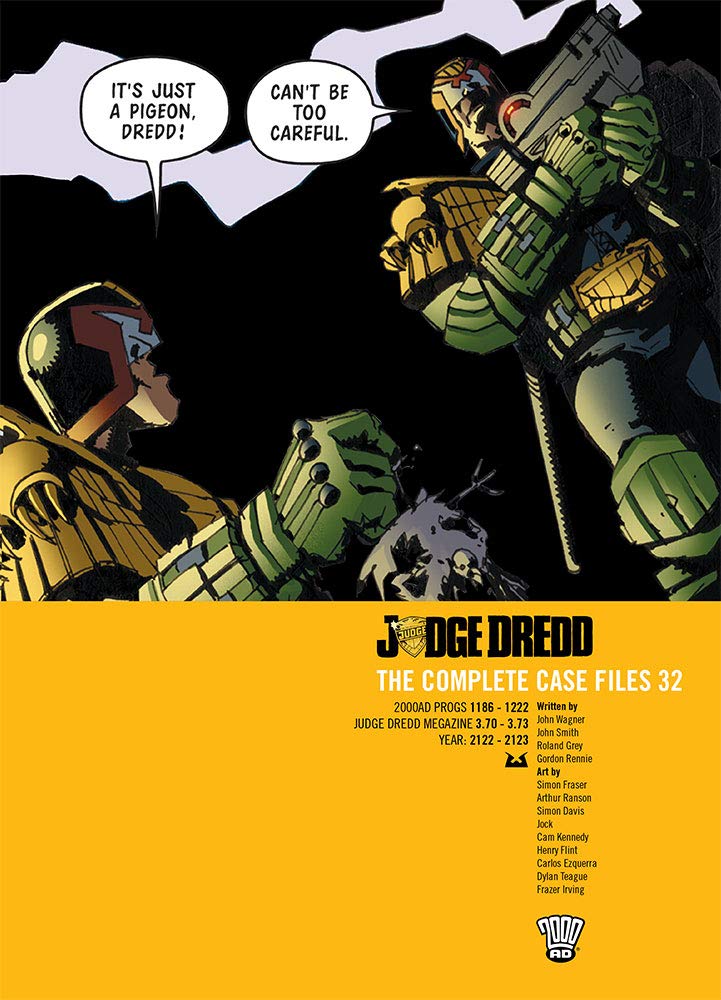 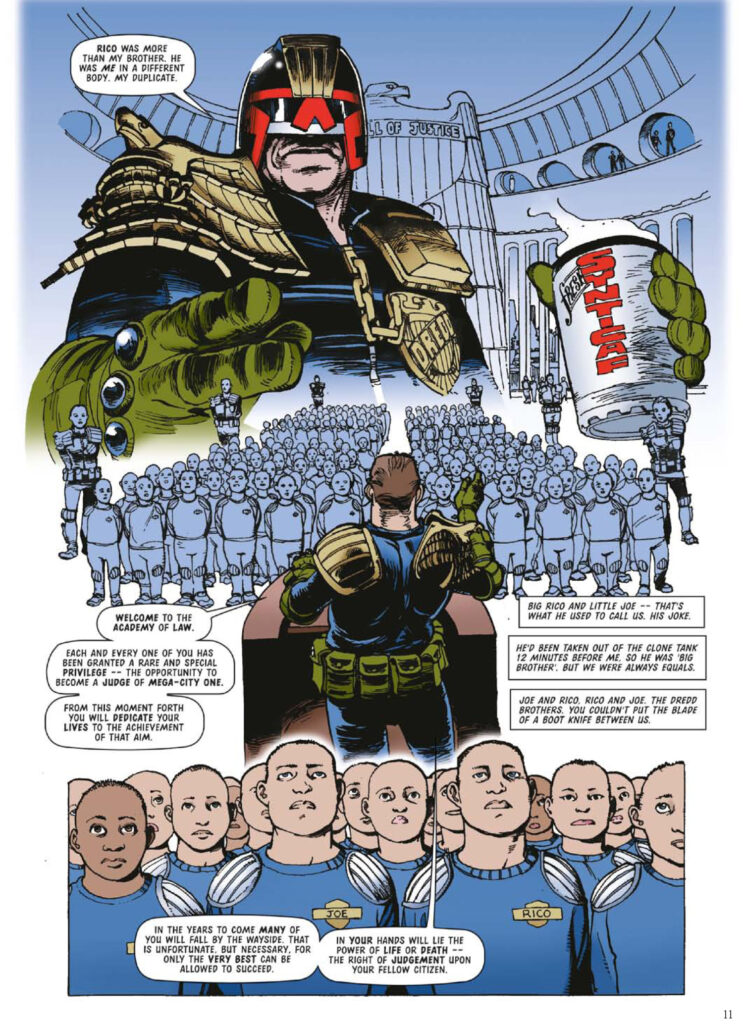 They say you shouldn’t judge a book by its cover, but in this instance you’d be safe to do just that. The panel selected for the front gives you a good idea of what to expect inside: a judge holds up a dead pigeon, saying, “It’s just a pigeon, Dredd.” Dredd, having shot it, replies, “Can’t be too careful.” Brilliant.

Like the previous book in the series, this volume contains mostly short stories, with about a half-dozen two, three and four-parters, one long story and twenty single episodes. John Smith writes two stories, Gordon Rennie writes one, and Roland Grey (who gets an amusingly succinct “Roland Grey scripted a Judge Dredd story for 2000 AD,” as the entirety of his biographical information in the back) writes one. Apart from that, everything else is written by John Wagner, which means we’re in the safest hands possible when it comes to short, blackly comic and clever vignettes of life in Mega-City One.

One of the benefits of shorter tales is that it allows for multiple artists, and the talent on display is formidable: Jock, Arthur Ranson, Cam Kennedy and Henry Flint are only some of the artists in this volume, many of them fan favourites, and deservedly so.

The book starts strong, with a three-part story introduciung Rico, the latest Dredd/Fargo clone to make an appearance in this long-running saga. Wagner also fills in some details about Dredd’s relationship with the original Rico, Dredd’s clone-brother (whom he sent to Titan, the lunar prison for disgraced Judges).

As well as more Rico (we’ll come back to him), there are also appearances from long-established characters P.J. Maybe, Mean Machine Angel and Walter the Robot. Judge Death even puts in an appearance, of sorts. Most of the stories are funny, some very much so, and that includes a genuinely amusing one about farts. Wagner proved long ago that he’s able to endlessly churn out good ideas that many lesser writers would be tempted to drag out far longer than he does.

There are a few duds, noably ‘Copycat Crimes’ by the aforementioned Roland Grey, with Dylan Teague and Kevin Brighton’s artwork doing little to shore up a poor idea. The one long tale, ‘Sector House’, reunites Dredd co-creators Wagner and Carlos Ezquerra for an eight-part story about Rico settling into his first posting. In no time at all he’s cracking heads and making arrests. However, he also uncovers wrongdoing inside his own Sector House, which doesn’t do much to endear him to fellow Judges. Rico, and his relationship with his older clone-brother, is clearly going to be visited again, and it provides a rich seam of stories featuring what is essentially a younger Dredd. Discussing the fact that there are a bunch of clones, Dredd even goes as far as to point out that he’s not expendable. Ezquerra’s artwork is really strong here, with an action sequence that’s genuinely exciting and some of the best work he’s ever done.

Normal practice for these books is to reprint about a year’s worth of stories from 2000 AD and the Judge Dredd Megazine, but this book contains only three stories from the Megazine, the rest are from 2000 AD. The one long story is good, and most of the shorter stories range from good to very good. With Wagner at the helm, ably backed-up by some superb artists, this book delivers on the promise of that wonderful cover in spades.