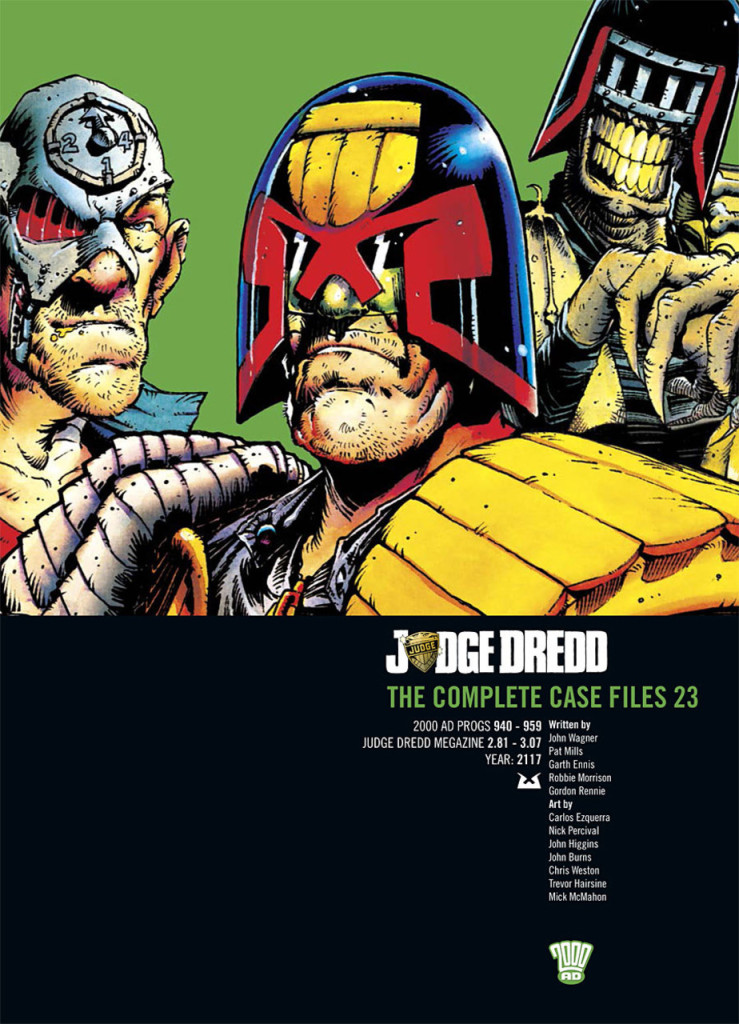 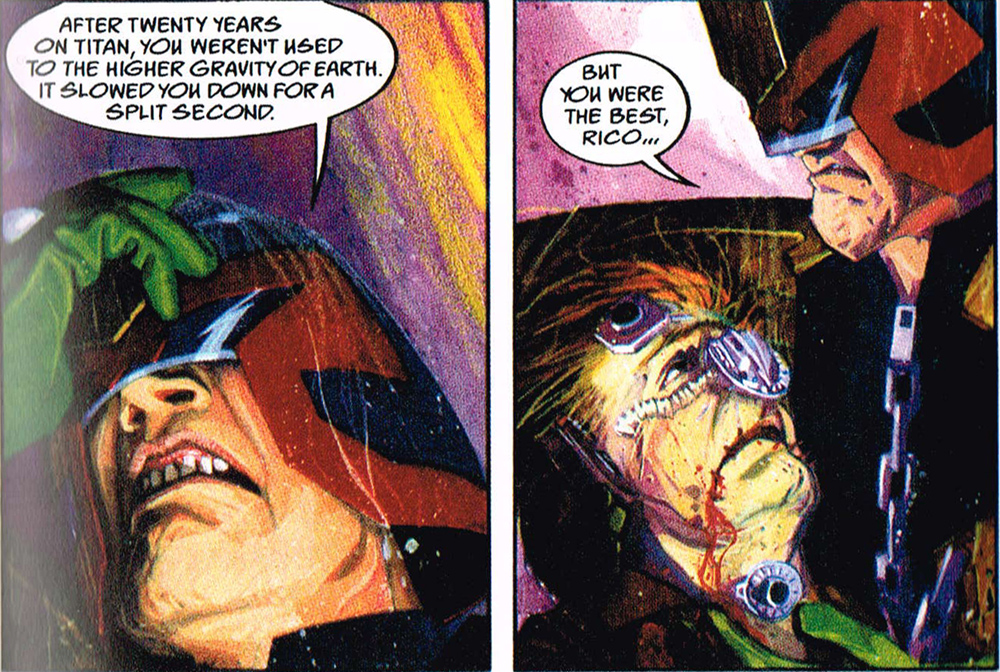 Case Files 23 opens with the collection’s longest tale: ‘Goodnight Kiss’, written by Garth Ennis. Nick Percival’s art is striving for Simon Bisley. It’s stylish with a surface gloss, but it’s not always terribly well executed. Jonni Kiss, our villain, is meant to be super-cool, though it’s difficult to tell whether Ennis thinks he is cool or whether he’s meant to be someone who considers himself cool, while really being an arsehole. The same is also true of Dredd here, who is hard to the point of being ridiculous as Ennis attempts to cram every macho cliché imaginable into this story. Sadly, it just doesn’t work: pretty poor, and far too long.

The next story of note is ‘The Return of Rico’ (subtitled ‘Flashback 2099’), in three parts reworking a Pat Mills tale from the strip’s very early days. Paul Johnson’s artwork (featured) is fantastic and atmospheric, and the story – a pivotal event in Dredd’s history – exudes drama, even if sometimes verring into melodrama. This was written back in much simpler times, when Dredd hadn’t developed many of his characteristic traits (which explains why he’s quite chatty here).

‘Bad Frendz’ by John Wagner is the next long tale, doing little to deserve the high page count. It’s yet another example of a dangerous assassin visiting Mega-City One, either to kill Dredd or kill others while Dredd tries to stop him.

The section reprinted from the Judge Dredd Megazine begins strongly with ‘Whatever Happened to Bill Clinton?’ This concludes a story begun in the previous collection, and wraps things up most satisfyingly. Siku’s artwork is very good, and a couple of panels are downright superb: one of the highlights in a collection that contains a number of funny stories.

‘Repeat Offender’, by Wagner and Tom Carney, is a low point, a story that demands we read the same badly-drawn pages time and again. Another low is ‘Bug Crazy’: more poor art in a tale about a staring contest, which is about as exciting as it sounds.

The penultimate story, ‘The Three Amigos’, is six-parts featuring the unlikely trio of Dredd, Judge Death and Mean Machine Angel. This is proper old school, and Trevor Hairsine’s artwork is very reminiscent of Mike McMahon’s Dredd strips in the 1980s annuals. There’s lots of scope for black humour, and it’s enjoyable, if a little lightweight given the heavies involved.

And just to remind you how much McMahon has moved on since those days, the final story in this collection is one of his rare later Dredd strips. ‘Hot Pursuit’ is an okay little story that lets McMahon indulge his fondness for bold design, though his style does often veer dangerously close to abstract art.

Scattered throughout the book are many shorter stories by a wide selection of writers (by Dredd standards) and an even wider selection of artists, with as broad a range of talent as you would expect. Johnson, Siku and Hairsine are among those who stand out, but many of the other artists aren’t as accomplished, and some are just plain bad. Many of the stories are quite amusing, though few are really outstanding.