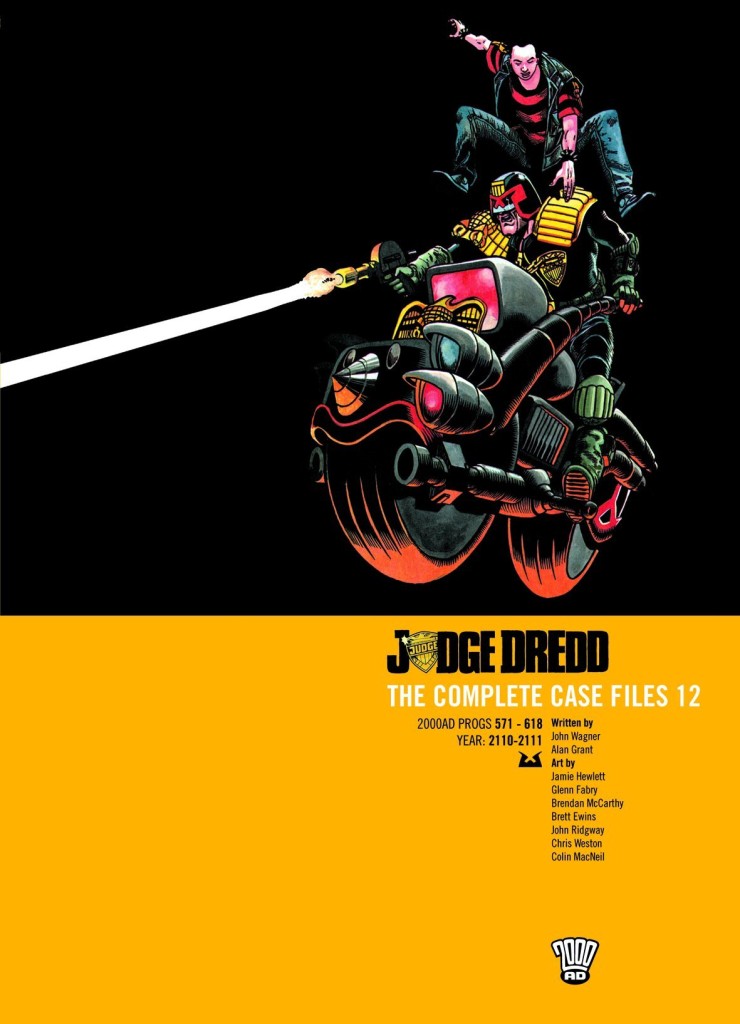 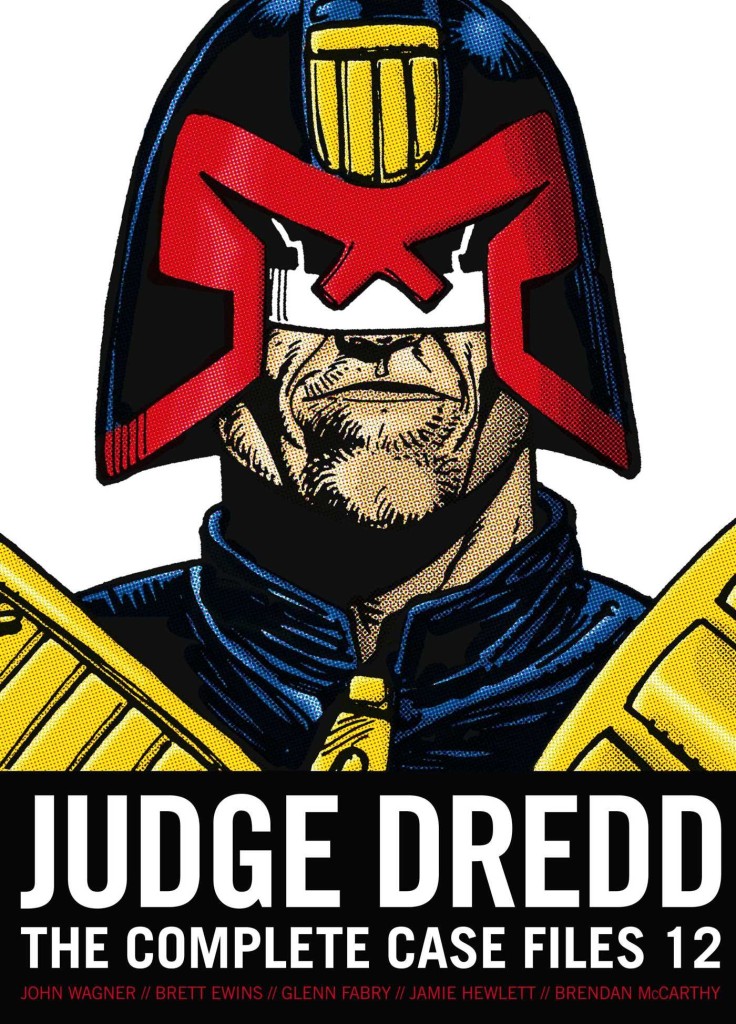 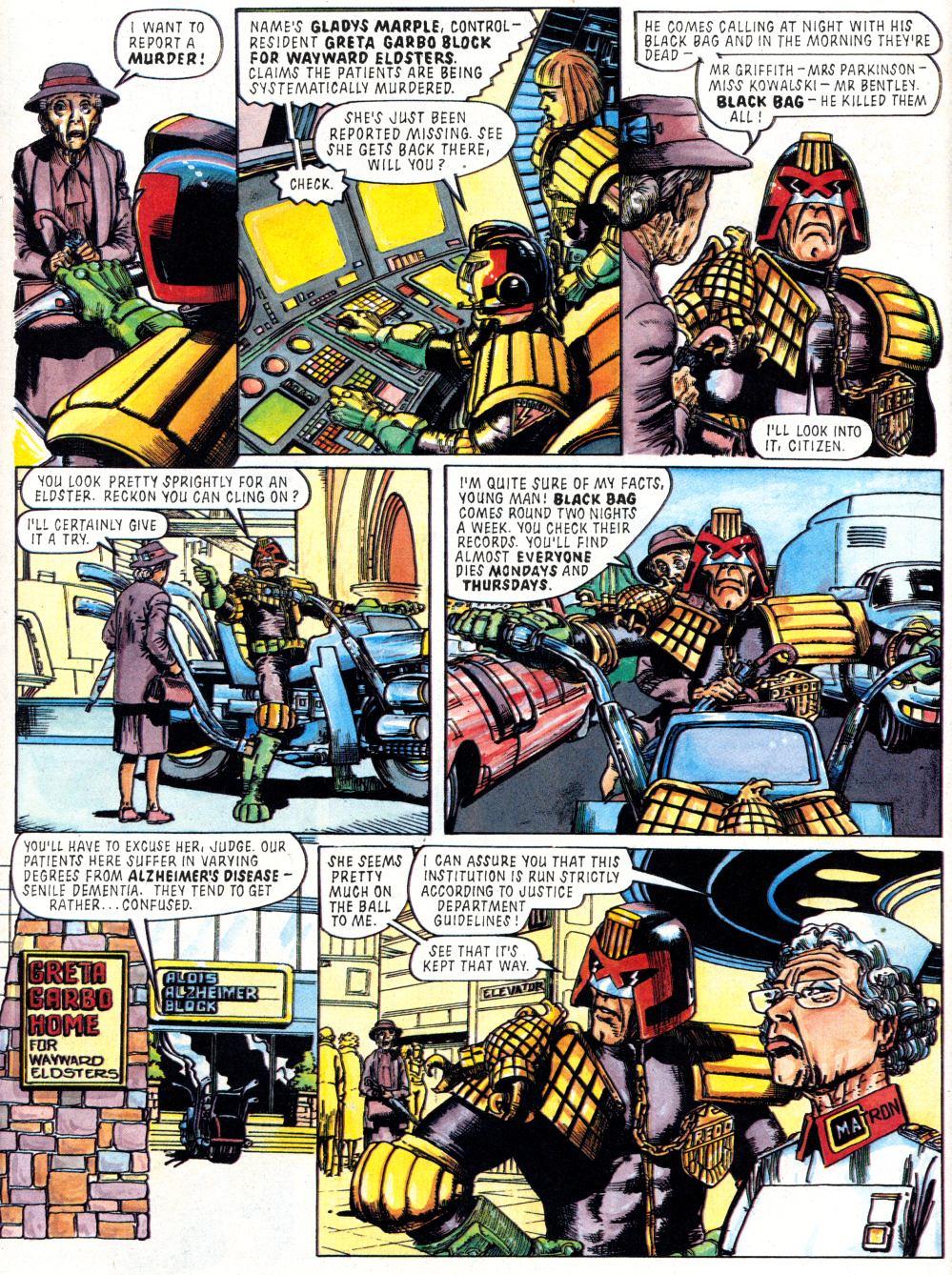 This collection of Judge Dredd runs from early 1988 to early 1989, and brings two major changes. The first is obvious: from the halfway point we arrive at Judge Dredd moving to full colour throughout, and that’s somewhat the mixed blessing. Most artists colour their own work, and while some have a natural affinity, others are poor. John Ridgway is particularly good, employing a subtle palette, and so is Will Simpson.

A second change is that John Wagner and Alan Grant have severed their Dredd writing partnership. A few holdovers appear, drawn by artists who take longer to produce their pages (Cliff Robinson), but most of the writing credits are Wagner alone, with a few Grant solo efforts. On the basis of these stories, Wagner is the more methodical and structured, and Grant the more whimsical.

Case Files 12 is very much a collection of short pieces. Few extend beyond four episodes, and there’s not an epic in sight. The breakout character is P.J. Maybe, introduced in an underwhelming story in Case Files 11, but here flourishing. Wagner sticks with the distinctively written notes provided by the thirteen, then fourteen year old Maybe, and throws in a whole catalogue of funny jokes about the Maybes being related to the Yess’ as P.J. goes about his murderous business. Liam Sharp, whose previous Dredd had been lacklustre, here suddenly clicks into place, although he’s among the poorer colourists.

A number of top artists who produced very little Dredd appear in this collection. Alan Davis’ only Dredd strip is in black and white, featuring the Bat-Mugger, and intended as a warm-up for the Batman/Judge Dredd team-up he was originally scheduled to illustrate. It’s as polished as any Davis art, and inked by Mark Farmer. Glenn Fabry’s first Dredd looks very good, but it’s an average story, and Liam Sharp is credited with the second part, although the hand of Fabry is in there. Far better are his subsequent tales, written by Grant, of the Gods messing with an ordinary citizen, and another of Buddha turning up in Mega-City One. We also have Phil Elliott, who’s not comfortable, and draws an awkward mouth on Dredd. Jamie Hewlett heading the list of artists on the cover is rather disingenuous, as his sole contribution is a wild five page collaboration with Brendan McCarthy, which owes much to the vivid colouring of Steve Whitaker.

Chris Weston is also new, and fast, as he draws several stories. He’s not the artist he’d become, but neither is there the static quality of his later work. His best is ‘Worms’, a Dennis the Menace (UK variety) pastiche, although that’s ill-placed before the P.J. Maybe material featuring similar ideas.

It’s nice to see Ian Gibson back on ‘Full Mental Jacket’, which is completed by Steve Parkhouse inked by Brendan McCarthy, but extended too long at five episodes. The same applies to ‘Twister’, although the segue from black and white to colour as Dredd heads into Munchkinland works well. Dredd in the other Oz, though, isn’t as funny as intended.

The artistic debut that really counts is Colin MacNeil, and he’s impressive with his designs for Hondo-Cit and the judges that patrol it. Wagner’s on form too, with a plot that’s not what it first appears to be. That’s also the case for Wagner’s Miss Marple pastiche, drawn by Ridgway and Tim Perkins, which delivers quite the sinister twist.