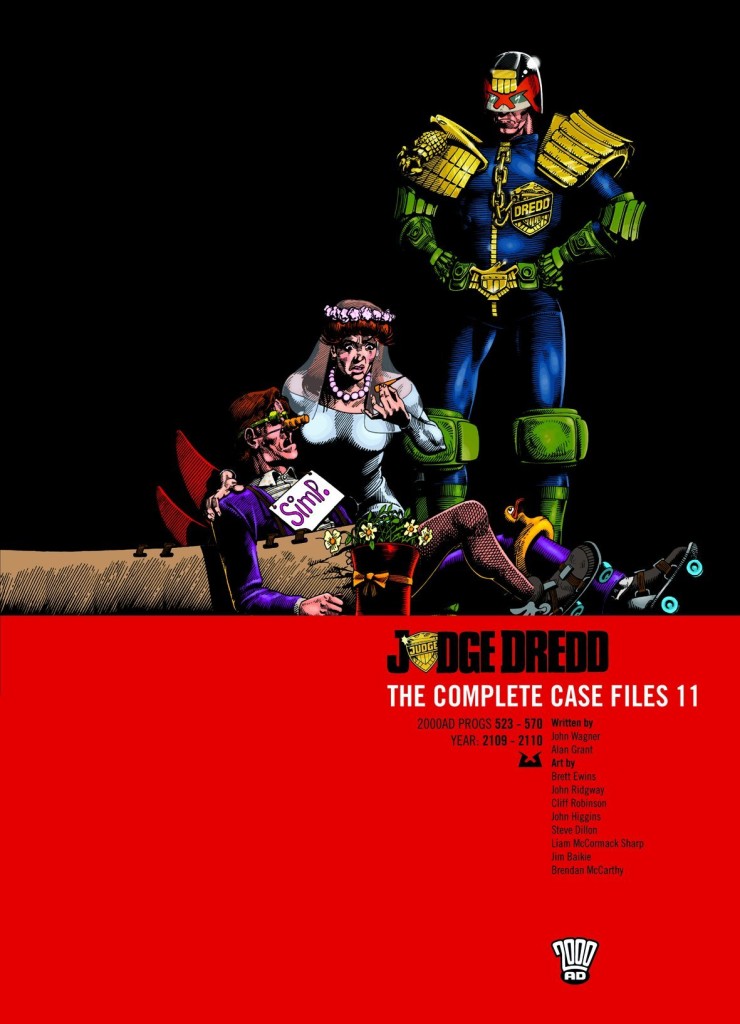 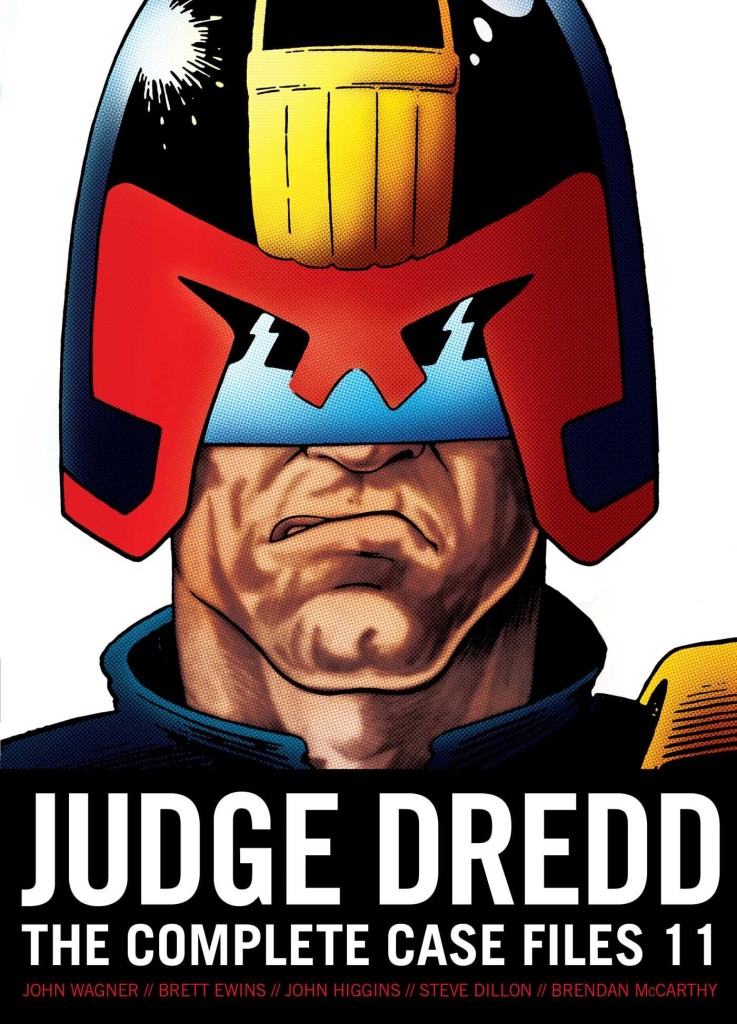 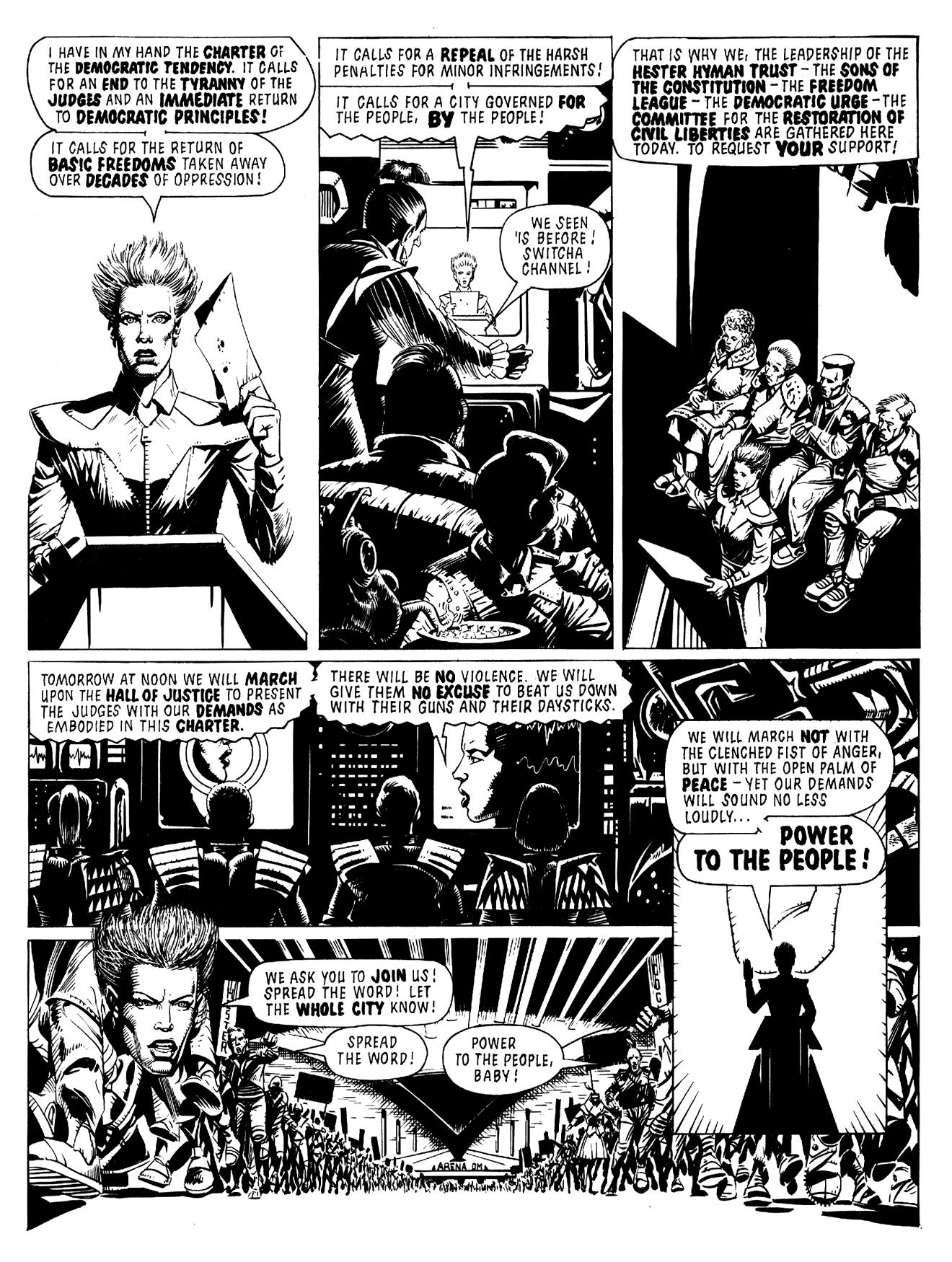 The Judge Dredd material reprinted in this collection was originally published in 2000AD between summer 1987 and early 1988, shortly after the comic had celebrated its tenth anniversary, but it had hit a sticky patch. Many original readers stuck with the comic well beyond normal expectation, and pleasing them while attempting to appeal to the next generation was a difficult editorial balance to strike, and wasn’t always achieved. Old fashioned future sports stories sat uneasily alongside uninspired material from new creators, and of all the introduced material only Zenith really caught the imagination.

As the standout feature, Dredd occupied the prized centrespread, meaning his strips always began in colour. It was better colour than 2000AD had previously seen, but transforming those pages to black and white here results in mud on some pages. Possibly with good reason, Dredd’s creator John Wagner, and writing partner Alan Grant were very proprietorial about the character. Certainly when other writers were later given a crack at Dredd the initial results were far from pleasing, but it’s also the case at this point that Wagner and Grant were lacking inspiration. And of necessity a lot of new artists were receiving the chance to draw Dredd, and the results are far from pleasing in some cases.

The centrepiece of the collection is ‘Oz’. For more detail see the review of the individual album, but despite some good ideas and fine moment it sprawls, and appears to be two different stories mashed together. Furthermore nine different artists over 26 chapters is never a good idea, even if they do include Brendan McCarthy.

That’s symptomatic of the entire book. Dredd has always encompassed a broad artistic church, but some consistency would be nice. Only Steve Dillon, John Higgins and Barry Kitson manage three consecutive chapters here, which is far cry from the Carlos Ezquerra days. Jim Baikie is admirably professional even if his precise style isn’t best suited to Dredd, and the team of Mike Collins and Mark Farmer, an inker unusual in 2000AD, don’t stint on the crowd scenes for their first Dredd, but Liam Sharp still had a lot to learn.

In the past when the more action-oriented thrillers didn’t quite work, Wagner and Grant excelled with the comedy features, but even these aren’t top rate. They can’t make up their minds if the John Ridgway drawn ‘Rageddy Man’ should be a comedy or not, despite ending with a good joke, and the Cliff Robinson drawn ‘Simp’ just about works. It’s possibly apt that the pastiche of ‘Fairlyhyperman’ is only fairly funny, with Collins and Farmer fairly rushed this time.

The best strip in Case Files 11 is ‘Democracy’, drawn by an improving John Higgins, and featuring a theme Wagner and Grant were warming to. It presents a neat problem and twist, and is compact. Brevity would have improved the following ‘Alabammy Blimps’, a sort of Deliverance drawn by Steve Dillon.

‘Democracy’ is a continuation of an earlier theme, and if anyone unaware were to be asked to identify the one new character introduced in this collection with long term viability, surely no-one would select P.J. Maybe. He appears in a tale of murderous robotic bugs, and while the tone of the ending suggests Wagner and Grant had plans for his re-appearance, it was a long way off. Over a year in fact, and can be found in Complete Case Files 12.