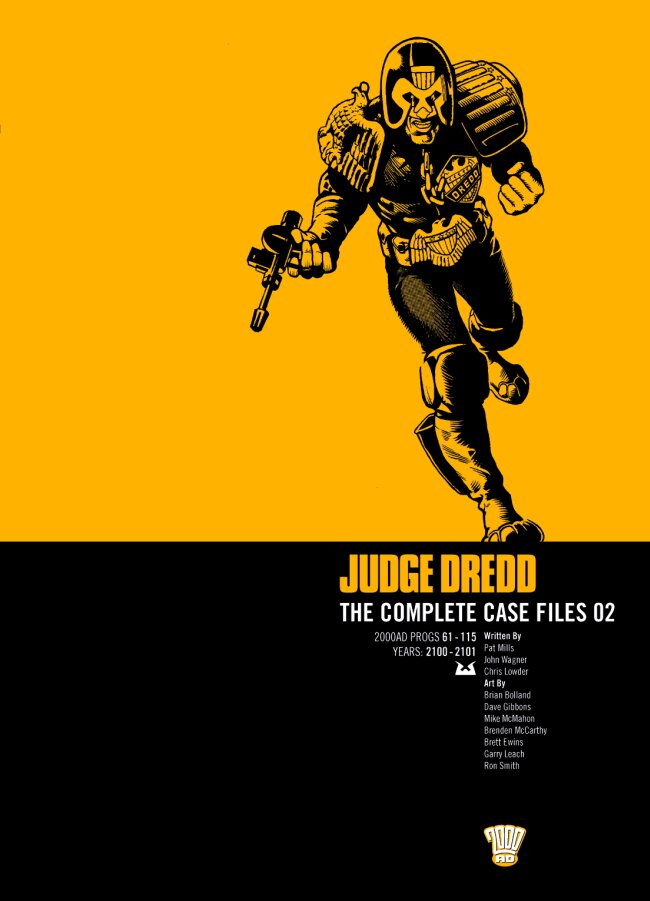 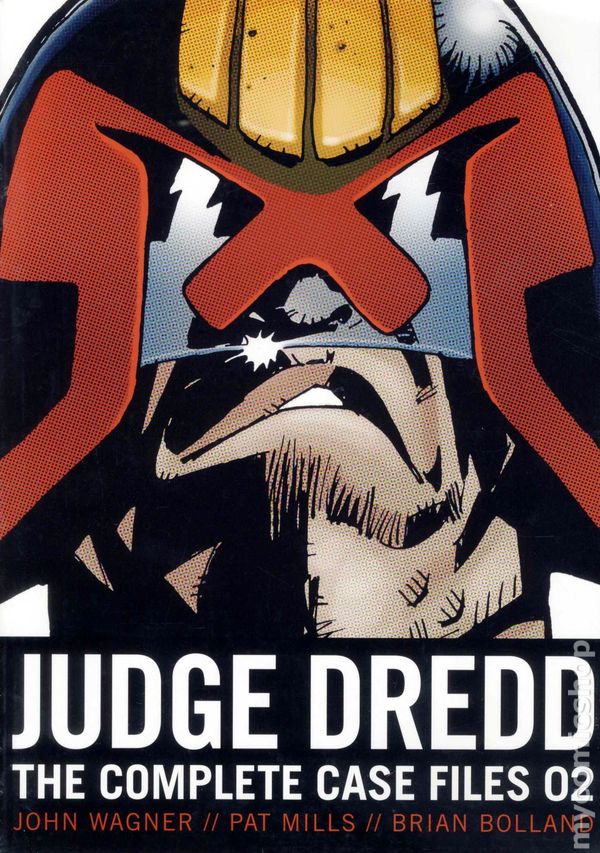 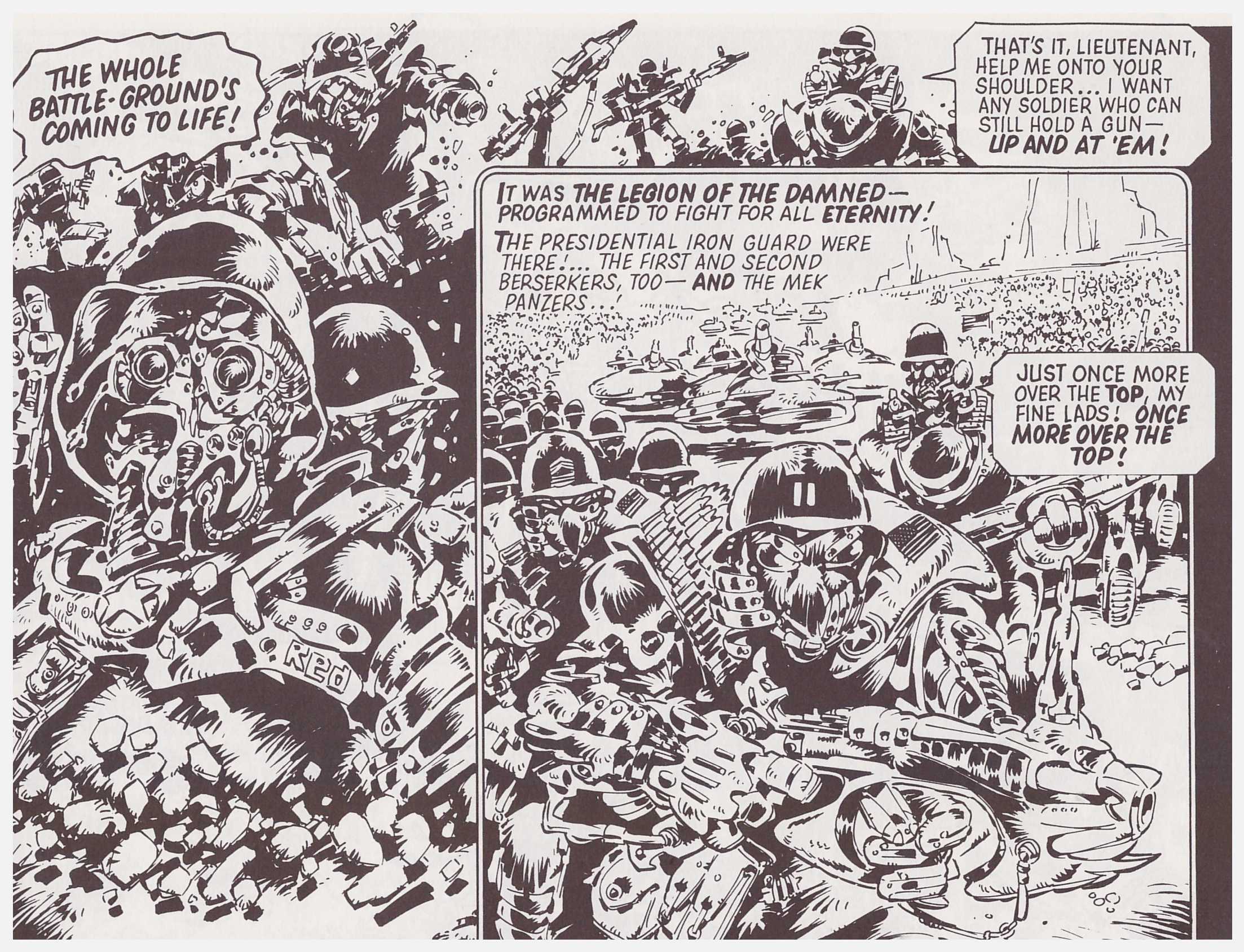 In complete contrast to virtually no previous Dredd stories extending beyond two parts, most of Dredd’s second year was occupied with two lengthy stories. ‘The Cursed Earth’ was more episodic in nature, for the most part split into two part segments, but ‘The Day the Law Died’ (or ‘Judge Caligula’) was a proper serial, continuing over thirty chapters, or two-thirds of a year when originally published.

It had already been established that the area surrounding Judge Dredd’s home of Mega-City One was a highly radioactive wasteland populated by mutants, savages and those evicted from the city, but Dredd had never previously had cause to experience the area first hand. The reason arrived as a desperate quest to deliver plague vaccine to Mega-City Two on the continent’s west coast.

The story was Pat Mills’ concept, and given the previous problems in artists being able to deliver five pages every week, it’s surprising to see the entire 25 week run illustrated by Mike McMahon and Brian Bolland, their styles ever more divergent. It takes Mills until a quarter of the way through to fire his imagination, up until that point pitting Dredd and company against assorted rag-tag bands of mutants, albeit gloriously grubbily depicted by McMahon. This isn’t one of Bolland’s strengths. Each of his characters looks to have showered before shambling on panel.

Beginning with some robot vampires, Mills turns out a succession of engaging episodes as Dredd meets a rock-eating alien, cloned dinosaurs that pre-date Jurassic Park, the last president of the United States (later to return). Some episodes are obvious satire, others not very subtle commentary, but Mills never loses the primary focus of entertaining even if he is way too fond of Spikes Rotten, the criminal making good chosen by Dredd to accompany him.

Once Dredd returns from Mega-City 2 he’s propelled straight into ‘The Day the Law Died’. John Wagner had been watching the BBC’s adaptation of I, Claudius, and took John Hurt’s portrayal of Caligula as the basis for insane Judge Cal who seizes power in Mega-City One. Dredd is framed for crimes committed by a robot duplicate, and exiled to Titan. Whereas ‘The Cursed Earth’ had been episodic with a connecting thread, Cal’s spiralling madness is Dredd’s first real serial since ‘Rise of the Robots’ barely two months into Dredd’s continuity.

Ideas are introduced and discarded very rapidly during the Cal story, giving an overall bitty quality accentuated by using six different artists over twenty episodes. Brendan McCarthy’s professional debut was here, and it’s interesting to see Bolland inked by Dave Gibbons and Garry Leach, but the lasting consequence was the introduction of Ron Smith as a Dredd artist. His polished, clean style is more Bolland than McMahon, although his Dredd is more compact and athletic than any other portrayal to date. He’d become one of the most prolific Dredd contributors during the 1980s.

As with other early volumes in this series, there’s a muddiness to some printing, most often pages originally seen in colour, which is a particular shame with regard to McMahon’s introductory splash page to the series, a piece of glorious cinematic excess. In story terms, though, it’s a big leap from Case Files 1, and the curve remains upward for the next volume. Those preferring their Dredd in a more lavish package can purchase both The Day the Law Died and The Cursed Earth as individually collected hardbacks.