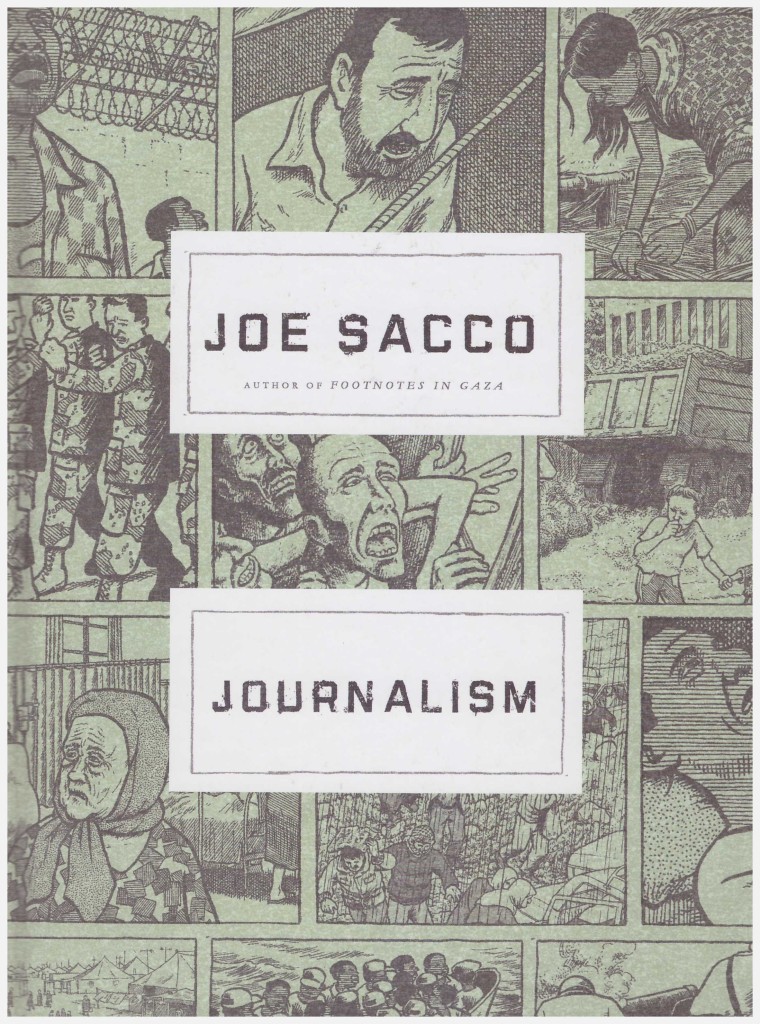 With Palestine and his later books on the conflict in Bosnia Joe Sacco carved out a unique form of comics reportage. It took almost a decade for this achievement to be recognised, and well over two decades later, in English language comics, he’s still pretty well number one in a field of one. There’s a suspicion that this is because Sacco is uniquely qualified for such work, firstly by virtue of an amiable character that enables him to get on with most people, and secondly the additional trait of being able to keep his mouth shut and listen in the face of horror when many couldn’t. The third unique qualification is a capacity for the sheer work involved in producing even a short strip.

Thankfully by the late 1990s Sacco’s reputation and integrity had gained wider circulation, and he began receiving commissions from mainstream magazines and newspapers. It’s these, spanning a decade’s work, that are collected here.

Much of Sacco’s mid to late 1990s was spent either in Bosnia or working on strips that detailed his time there, so it made sense that he was sent to the Hague to cover the trials of those accused of war crimes in Bosnia. He also returns to Gaza, and an assessment of Chechnya as it was in 2008 coupled with a history of Chechen persecution supplies the background to that conflict. His coverage of the war in Iraq has a greater depth, including time spent with US troops, and Iraqis supplying testimony of war crimes.

As the book continues we move away from war zones and into other areas of human interest. Sacco returns to Malta, the nation of his birth, to investigate the overwhelming influx of refugees fleeing the conflict in Libya, and how this is impacting on a small island nation. It’s with this and the following strip in the Indian state of Kushnigar that Sacco really hits home. His perspective is unique, but those with an interest in Iraq and to a lesser extent Chechnya aren’t short of information sources. Despite refugee migration escalating to the point of regular political discussion and hand-wringing in Europe, Malta remains almost ignored in international news reports. Equally, caste-instigated poverty in India barely registers internationally, yet Sacco’s humane insights, requiring considerable courage in the face of opposition, will enlighten even the well-informed.

We’re now used to Sacco’s individual and subtle approach to cartooning, but shouldn’t take such accomplished character-driven storytelling for granted. Photo reference is essential, but this is no crutch as evidenced from material detailing events where that wasn’t possible. Such is the case with Thahe Sabbar and Sherzad Khalid detailing what they’ve seen and experienced, which Sacco portrays with a dignified horror. His scenery and scene setting are spectacular, even when depicting devastation and degradation, the latter most evident during the trip to India.

Sacco’s introduction explains his views on the validity of his process, and his illuminating notes on each section offer further insight. One editor, for instance, had to be convinced that the crosshatched background to a panel wasn’t an attempt to sneak in a subliminal Christian message via dozens of minute crosses, and his material from the Hague was diminished by the refusal of certain integral parties to take his work seriously.

It’s disappointing that when the quality shines from every page here there are some who just will not see.