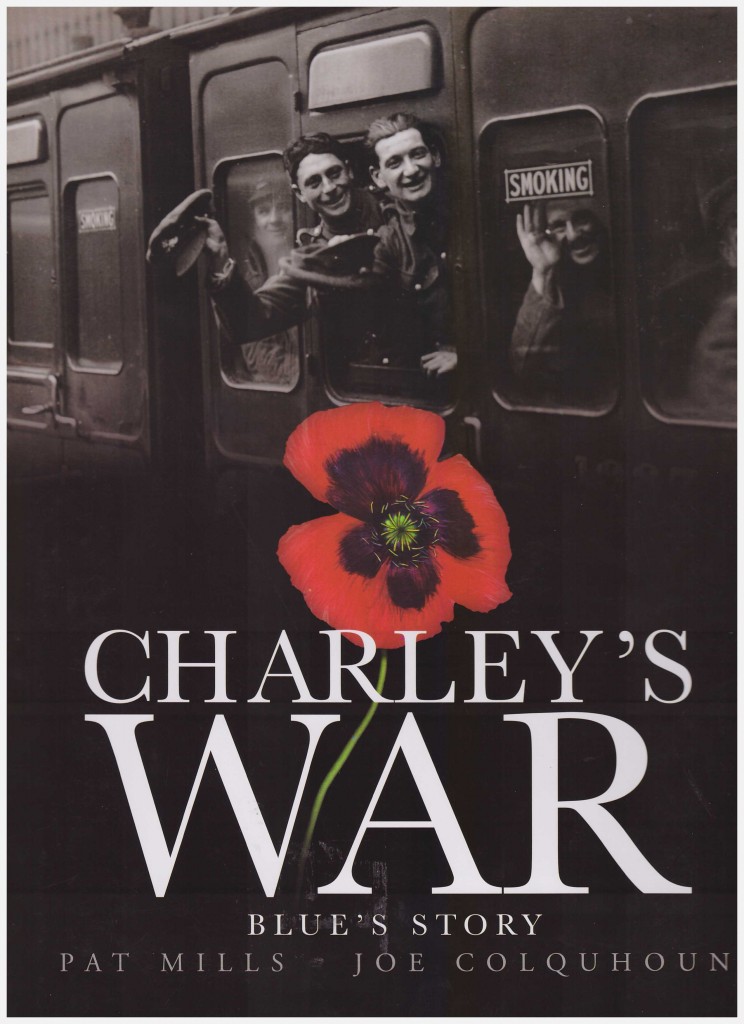 With this fourth volume of reprints Charley’s War progresses to more purchaser-friendly titles rather than dates such as the previous 17th October 1916 – 21st February 1917. As the volume begins Charley Bourne is still at home in London recuperating from the injuries received during his participation in the Somme conflict.

He manages to stop his younger brother Wilf signing up for armed service, but Wilf was a persistent young lad and would recur later in the series. Also back home is Charley’s odious brother in law Oiley, whose latest business is helping deserters outwit the military police on their trail. For a price, of course. In Silvertown the MPs are represented by the feared Drag Man, one Captain Willis, himself injured in battle and on a crusade to ensure no-one escapes what he considers their duty.

The Blue of the title has deserted from the French Foreign Legion, a notoriously hard organisation that will take any fit man with no questions asked who’ll submit to their harsh discipline. In his informative afterword writer Pat Mills notes Blue’s character and experiences were based partly on Percy Toplis, whose story was adapted for novel and television as The Monocled Mutineer. His mutineering days would be detailed in volume seven, while this established his character.

It was quite the radical step in British boys comics of the 1980s to sideline a strip’s hero and veer off into completely different territory, but Mills wanted to detail the horrors of Verdun, and was fortunate enough that the readership eventually followed him. Mills supplies Blue with an eccentric set of comrades, and a core honour. An incident concerning stolen water in desperate circumstances provides fine dramatic fodder, as does the implacable Drag Man back in London.

Artist Joe Colquhoun impresses throughout this series, and it’s a great shame that the longer it continues the more it suffers from frequent muddied reproduction. Colquhoun never stinted on detail as far as vehicles were concerned. When French officers drive up in a car it’s recognisable as a Model T Ford, the Zeppelin bombing London early in the book isn’t just a big balloon, and there’s a magnificently detailed tram towards the end. Despite the horrors of Verdun occupying most of the book, that this is being related to Charley in London permits Colquhoun a refuge from the war he details so exactly, and a scene toward the end set in a music hall is equally full of life.

The next volume in the series is Return to the Front.