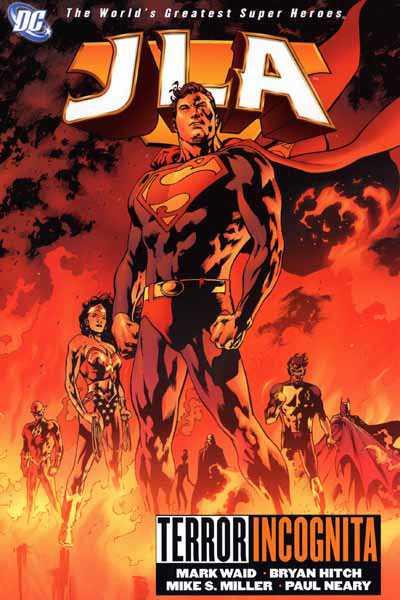 This is the final collection of Mark Waid’s JLA stories. Will it improve on the others? Well, the title’s smart.

Waid returns the foes from Grant Morrison’s earliest JLA work. Batman helpfully encapsulates their threat as “White Martians can fly wherever they like. They can scan information from unshielded minds, and they can become invisible and immaterial so as to walk through any wall anywhere”. They were also thought to be brainwashed, and therefore no threat, but Waid’s method of negating that ties back to the previous Divided We Fall. It’s one of several clever moments in passing during a story that overall fails to spark into life. The Martians tamper with Earth’s oxygen, leading to all sorts of disasters keeping the Justice League and their reserves busy, while Waid toys with their ability to shapeshift, and so resemble members of the JLA, feeding into the theme of identity used throughout his JLA work. The finale is well conceived, but getting there is hard work, and considering how Waid’s had Batman interact with the Justice League in earlier graphic novels, his end of story pep talk is wildly misjudged.

Bryan Hitch draws the first chapter of the title story, but it’s very apparent that by his high standards he’s going through the motions, the execution lacking his usual dynamism. It’s left to Mike S. Miller to complete, and he’s given too much to soon, making mistakes in a very public fashion, most obviously with figures out of proportion. It’s a shame because his layouts are very imaginative in places. There’s a fantastic illustration late on of Superman being surprised by the Martians, and it’s not the only example.

There are also a few problems with early art from Cliff Rathburn, but it’s the most impressive in the collection, in service of Waid’s best work on JLA. It’s ironic that this is a piece of whimsy in which Plastic Man has to convince a cynical child that Santa Claus is real and cool by concocting the tale of how he joined the Justice League. It’s great. Plastic Man constantly has to modify his fabrications as the child picks holes in his story, there’s a Santa action figure, and Waid pitches the mood just right.

Chuck Dixon, Scott Beatty and Darryl Banks contribute the penultimate episode, and it makes little sense divorced from the associated material. The JLA are involved with a Guantanamo Bay style concentration camp for criminals, while the Joker runs around monologuing, seemingly now incredibly powerful, and able to transform people to madness. One of his victims is an old foe of Green Lantern’s, Doctor Polaris, who’s threatening to reverse Earth’s axis.

This is the final curtain for Mark Waid on JLA, and he’s better remembered for Year One. The series continues with Joe Kelly writing Trial By Fire. If, however, you remember this material fondly, it’s also available in a more luxurious format, collected with Divided We Fall as JLA Vol. 5.