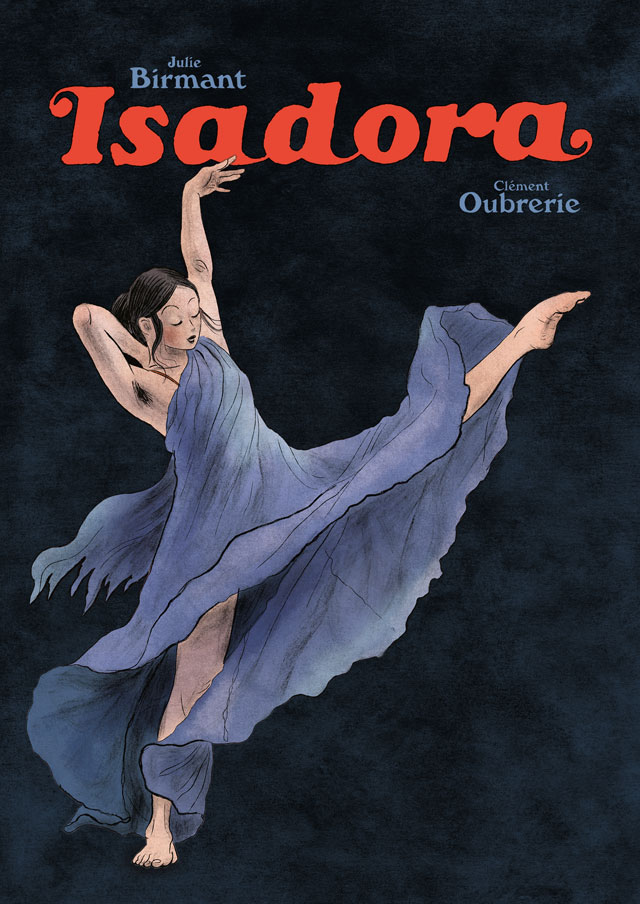 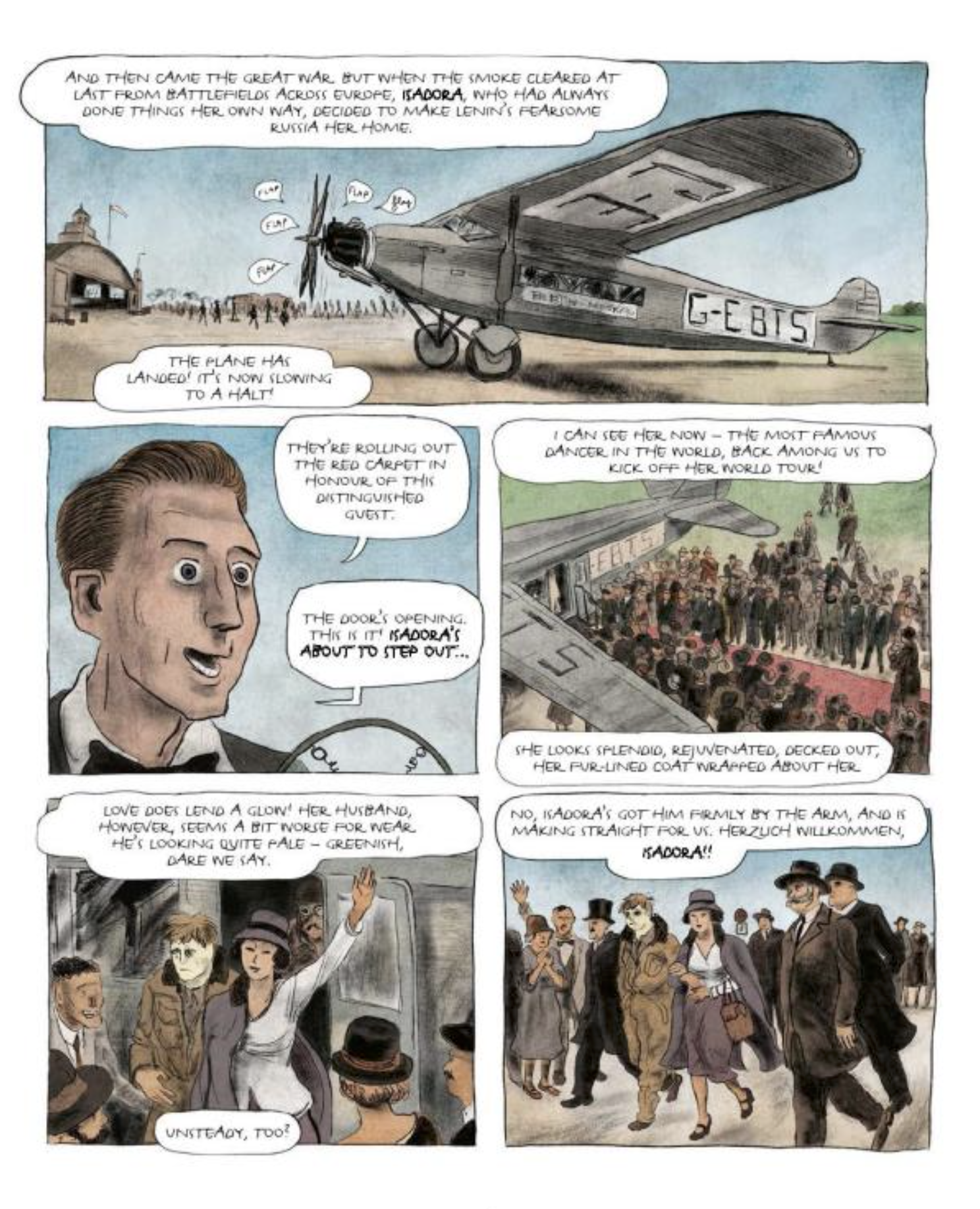 Following the success of their four volume biography of Picasso, compiled as Pablo, writer/film-maker Julie Birmant, and illustrator Clément Oubrerie turn their talents to Isadora Duncan.

Duncan was a pioneer in both art and life. She broke the shackles of ballet technique, and the social constraints of the time, particularly around sexuality. As shown here, she was often turned down by men, perhaps unsettled by a woman as initiator. Women would prove more receptive. Duncan’s story is still topical, and it’s no surprise the permissive Sixties saw a resurgence in interest, with biopics for both TV and the cinema. She even pre-empts some rock trajectories, so a promising subject for a biography.

While Pablo was a blow-by-blow account of a short period, Isadora is brisk whirl through edited highlights. A prologue introduces the middle aged Duncan and her toy-boy husband in a monoplane approaching Berlin (featured image). It’s an effective hook, illustrating her choice of spectacle over comfort, and a running commentary for a radio broadcast engagingly brings the reader up to speed. Thereafter, it slightly misdirects by focussing on her husband, poet Sergei Yesenin. However, as Yesenin recites his poetry to fellow emigré Maxim Gorky, it triggers Isadora’s traumatic memories that send her back…

The next chapter takes us back to the start of her metaphorical and literal journey, as the Duncan family arrive in London. The herd of cattle they share their transatlantic crossing with, amusingly demonstrates their limited means. This contrast between cultural aspiration and humble circumstances sets out the pattern of her life. The reader is dragged in her wake as she chases her dreams through the Old World of London and Paris, to the Classical world of Venice, and Greece, and to her final destination – Antibes.

The London chapter showcases Birmant’s ability to distill the necessary information, and the duo’s flair for animating this in dramatic scenes. They show us the penniless family passing their nights in the park (avoiding arrest for vagrancy by pretending to study the stars), and their days in (where else?) the British Museum. The latter conveniently introduces Isadora’s obsession with the classical world, and particularly Athena, goddess, appropriately, not just of wisdom but also war. Isadora’s brother plays Zeus as Athena bursts from his forehead. It’s a smart device offset by bathos as the security guard’s reactions turn from concern to ridicule. The creators deliver a series of similarly fine set pieces, as Isadora daydreams herself in myths, Rodin’s updates of classical sculpture dance across the page, and so on.

Clément Oubrerie’s murky charcoal overlaid with washes lacks the technicolor dazzle of mainstream comics, but captures the period look of hand-tinted film. His deceptively sketchy rendering presents iconic cityscapes and opulent interiors, while keeping focus on the characters. Isadora is drawn wide-eyed, with a hint of mania, while the supporting cast of Yesenin, Gorky, Rodin, and dance mentor Loïe Fuller, are distinctive with mild caricaturing. His figures have a similar measure of cartoon expressivity. The cover image teases dancing scenes, and Oubrerie delivers multiple cavorting Isadoras unconstrained by panel borders, and on flying leaves of paper as sketched by Rodin. More such scenes would have been welcome, but perhaps this reflects the reality of the source material – her dancing is captured only in a single brief film clip. Still, Oubrerie captures her physical artistry as she talks, dresses, mimes and seduces her way through these pages.