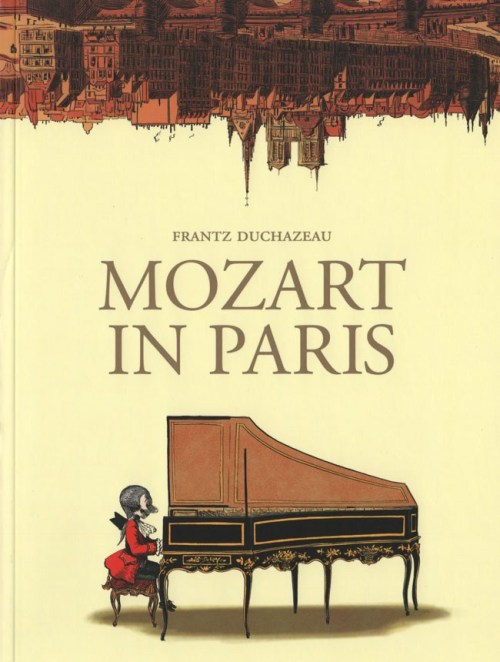 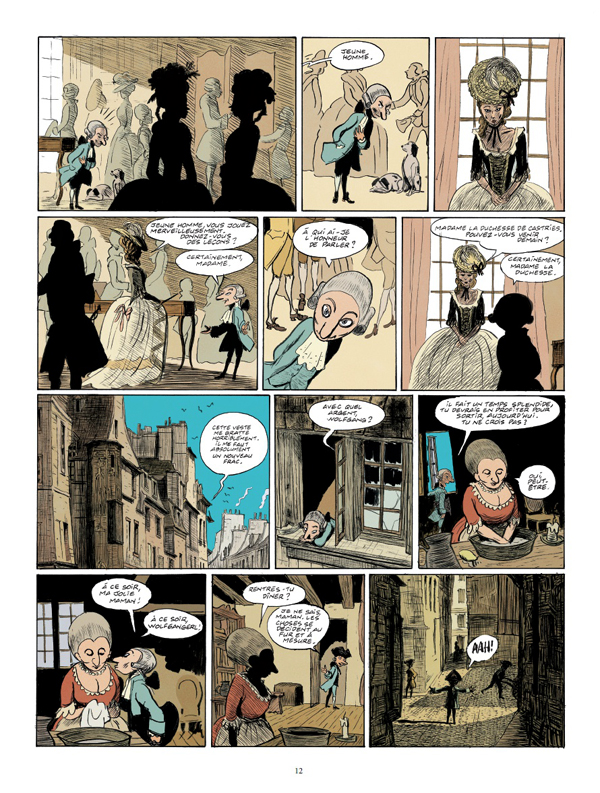 Wolfgang Amadeus Mozart is as famous as the Beatles, so readers might assume a similar career trajectory. However, Frantz Duchazeau tells a different story, contrasting the young prodigy’s lofty ambition with his precarious circumstances.

A deft prologue gives a flavour of the Mozart family, with Wolfgang’s sister playing piano for their music teacher father. As she leaves to pray for her absent brother and mother, the father also thinks of the son he nurtured and mentored: who we see literally rise in stature until he towers over his father. This symbolic imagery is followed by compressed narration, with single panel snapshots of key moments over his formative years, changing over a few panels from complaining he’s praised too much, to his “whims and buffoonery” resulting in his summary departure from the Salzburg court. This triggers a year in Paris trying to turn his talent into a career, and foreshadows his hubris and difficulties holding on to an appointment.

Duchazeau uses a variety of biographical approaches, including ‘a year in the life’. The Paris year is a wise choice, as it both captures the struggle for success (always more dramatic), and gives to the untidiness of real life an inbuilt beginning, middle and end. Another biographical choice of approach is between documentary or drama. Duchazeau creates a documentary effect by quoting surviving correspondence, while also dramatising events through action and dialogue that is necessarily fictionalised. He also adds magic realist scenes that illuminate Wolfgang’s innermost hopes and fears, for example while navigating a makeshift bridge harangued by an unseen interlocutor. Duchazeau – like Mozart working between symphony and sonata – juggles a variety of modes, resulting in an appealingly kaleidoscopic portrait of the composer. He also avoids authorial commentary, leaving the reader to have their own response to, for example, Wolfgang’s treatment of his parents.

Duchazeau has previous with history and music, though here making a volte face from American roots music to European classical. The art shows a corresponding shift from 20th Century expressive modernism (in comics exemplified by Sampayo and Mattotti), to period appropriate styles. The distinctive cityscapes, baroque palaces, and bourgeois drawing rooms, channel period engravings. His caricaturing – Mozart stalled at child size, all his physical growth concentrated in his nose – draws on the period cartoons of Gillray and Rowlandson. Duchazeau delivers all this with a fine sense of time and staging, exemplified by a sequence of Wolfgang wasting precious moments with a candle, as tragedy unfolds in the next room. The depiction of creative endeavour is harder with a composer than a painter, but Duchazeau has fun with the sequences of Wolfgang at the piano. Colourist Walter evokes the grimy discolouration of old master paintings, the oppressive density of the city, and occasional escapes into blue skies and greenery, further bolstering the strong visuals.

Aspects of the writing are less effective. Wolfgang’s supposed pining for a girl back home could have been visualised through flashbacks to romantic moments or just Wolfgang’s imagined images of her. Without this, the relationship feels tacked-on, and their final meeting falls flat. The dialogue at best is pithy, and at worst over-expository. At times it feels burdened by the source material – acknowledging numerous characters, and detailing the cultural politics more than the general reader needs. It sometimes feels like an array of incidents rather than a story, and despite his caricaturing skills, the middle-aged men in powdered wigs become hard to keep track of. Nevertheless, the reader will come away mostly entertained, and with a sense of Mozart the man, and the world in which he was trying to make a career.