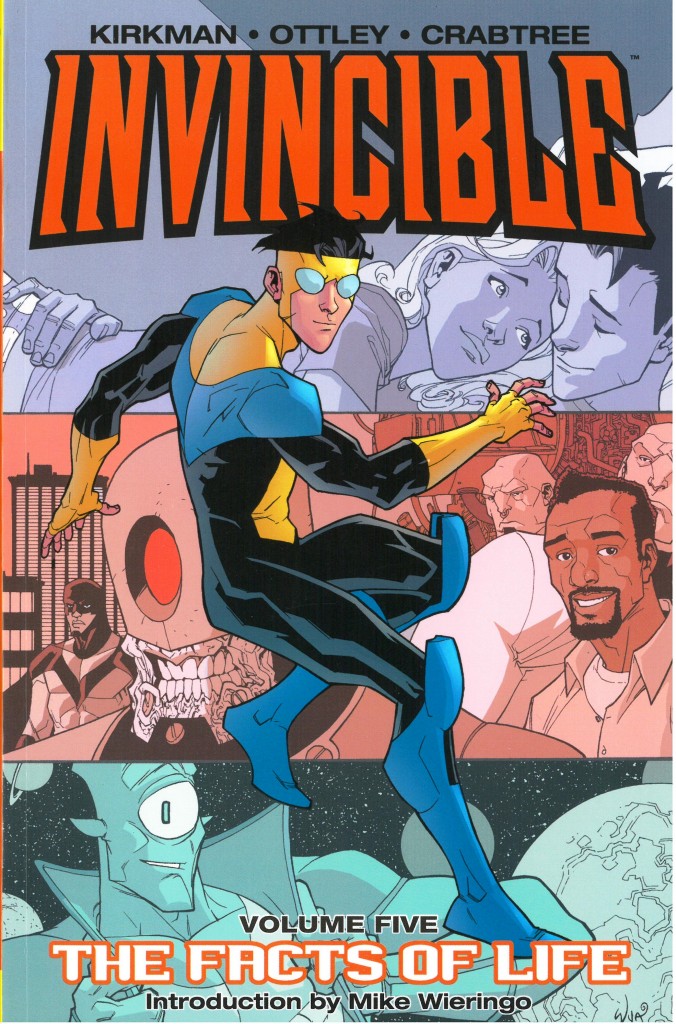 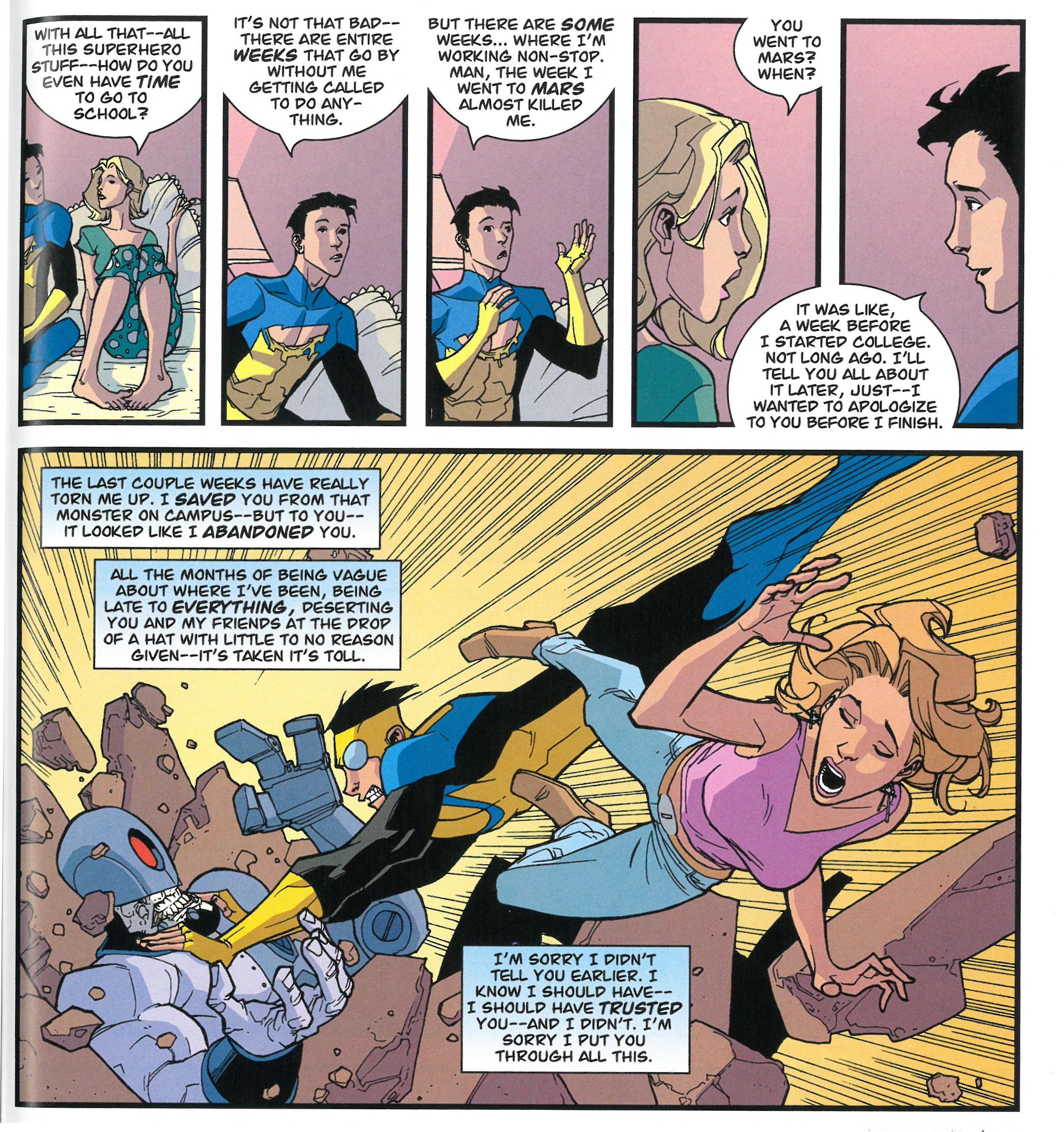 Mark Grayson is an everyday American kid, who’s just started at college, feeling his way into adult life. He does have a few additional idiosyncrasies to contend with though; he has superpowers courtesy of his Viltrumite father and he works for a ultra-top secret government department located beneath the Pentagon.

The ongoing plots continue to develop and expand, starting with Atom Eve renouncing crime-fighting to use her pink superhero powers for good in lesser developed countries, along with hints at a possible relationship that as a teenage boy, Mark hadn’t spotted. Mark starts college and meets an arrogant fellow student who turns out to be a psychotic villain playing with the boundaries between life and death. Much like Higher Education everywhere. Angstrom Levy, with the help of the Mauler Twins, completes a device to allow him to harvest the knowledge of his alter-egos in all the parallel universes that exist cheek by jowl with our own.

The function of this device works beautifully, but unsurprisingly leaves Angstrom both physically and mentally twisted and convinced that Invincible is the cause, despite the superhero taking a near-lethal battering from multitudes of Mauler Twins.

The breakneck pace of the previous volumes continues, deftly directing new plot threads including, Mark’s, ahem, move into adulthood, which is handled as delicately Summer (The First Time) by Bobby Goldsboro. We also have his mother’s descent into, and way out of, an over-reliance on alcohol, possible shenanigans with the Robot member of the Guardian group of superheroes, and the career path of a returning member of the NASA trip to Mars. The volume also contains a lengthy diversion into the story of Allen the Alien. Allen’s initiation into more friction-based adult areas also takes place, but is followed by an incident which is thankfully rare here in the real world. Included as extras are ‘Origins’, short pieces on the, well, origins, of superheroes Monster Girl, Rex Splode, Dupli-Kate, the Immortal and Atom Eve, which are mildly diverting and help to shed light on some of their motivations.

The art of Ryan Ottley works perfectly with Kirkman’s story in that it’s simple, direct, occasionally angular and leaves no room for doubt or confusion. It’s a story with no illusions, allusions or pretence of commenting on anything of any great depth. That’s not a criticism, merely an observation. The story barrels along with great confidence and verve and clearly has greater things to come. Recommended.

This volume can also be found in Invincible Ultimate Collection Hardcover Vol. 2, and next up is A Different World. 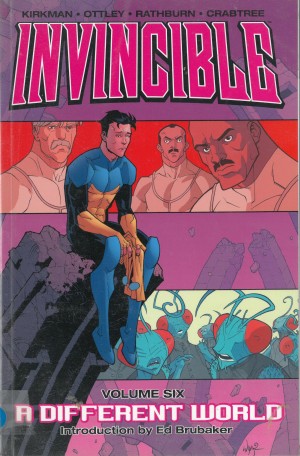 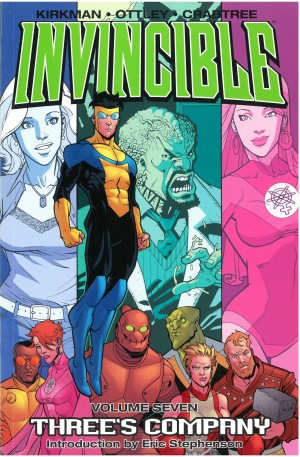 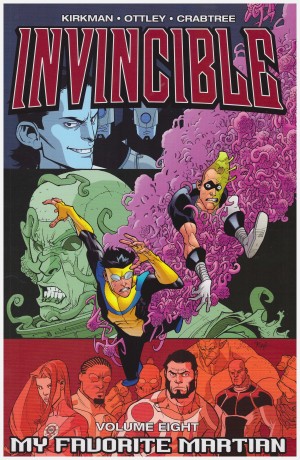 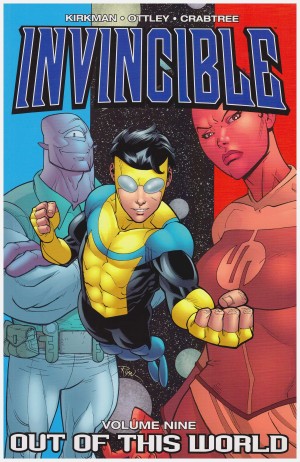