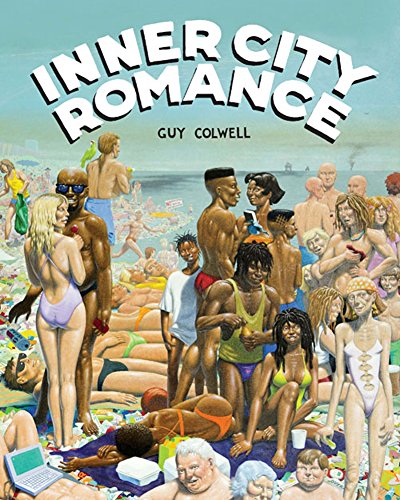 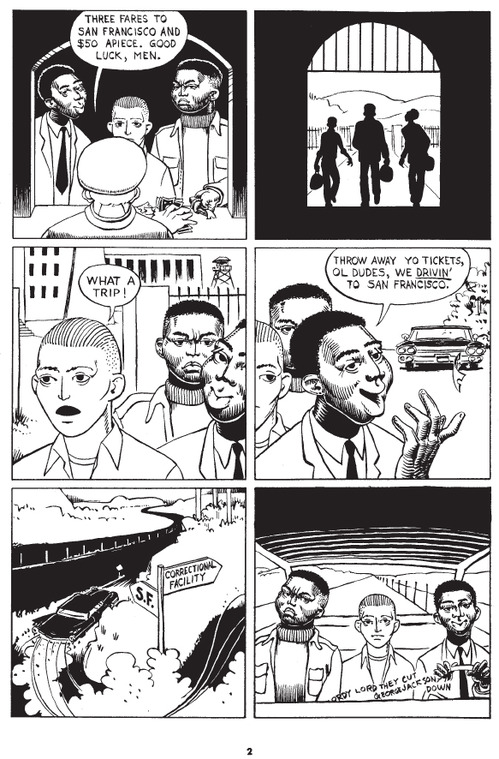 In the late 1960s Guy Colwell was an art student with aspirations of painting and held strong political convictions. Refusing to serve in an army that would send him to Vietnam, he was instead jailed for two years. When he emerged, underground comics culture had really taken off, and while he arrived late to the party an enthusiastic Colwell merged his passions to produce comics rooted in the social conditions of the day. Between 1972 and 1978 he created five issues of Inner City Romance, anthologised here, preceded by Colwell’s recollections about how the issues were produced and salted with many reproductions of his later paintings.

His first issue opens with three convicts being released from jail. Two opt for drink, drugs and sex, while the third experiences a variation on that theme. He’s turned toward revolution, explored in the second issue along with the idea of communes. The third issue is a purge noted by Colwell as his best work. It presents the assorted dreams of convicts, and is followed by a spotlight on the problems of social housing and profiteering landlords. The fire had been extinguished by the final issue, which presents a number of short stories in wildly different styles. The best of them concerns a kid hearing about a fire in the neighbourhood and his problems getting to see it, yet we also have a grim story of rape, and these are bookended by two strips just depicting couples having sex. One couple is black, the other white, yet there seems to be no message or purpose. There’s a lot of sex in Inner City Romance, and it’s varied, and almost always joyful.

An important aspect of the comics was Colwell’s attitude to African Americans. He’d mixed with them in prison, and lived in deprived areas when released. The world of underground comics in terms of creators and content was predominantly white, yet so authentic was Colwell’s portrayal that some assumed he was a black artist. It opens a can of worms. The dialogue sparkles, but by today’s standards a fair number of his characters aren’t exactly positive portrayals. Yet these were the people Colwell knew, and he wasn’t producing comics to be assessed for political correctness decades later.

There’s no point in pretending these comics haven’t dated. Colwell established the social realism so firmly when the message was instant, that it’s inevitable. It’s further compounded by the storytelling leaps Colwell took. His second issue is in the form of a rock opera, a hopeless conceit today. Strangely, the least dated aspects might be those originally included as pandering to the underground market. There’s the exploitation of sex, and Colwell’s presentation of an acid trip in his first issue displays imagination beyond the wonky TV static effects so commonly passing for the experience.

Artistically, the collection is all over the place as Colwell was forever experimenting. We move from stylised realism to heavily stippled melodrama and classical references via most places in between. What is consistent is particular attention to expressions. His characters convey their emotions as much as Colwell’s scripts convey his.

Colwell’s social idealism was of the heart on the sleeve variety, yet his own experiences never dulled a sense of humour, and the material isn’t as earnest as the topics alone might suggest. So, a snapshot of a byegone era certainly, and of a unique creator, but one probably best dipped into as originally published in preference to full immersion.