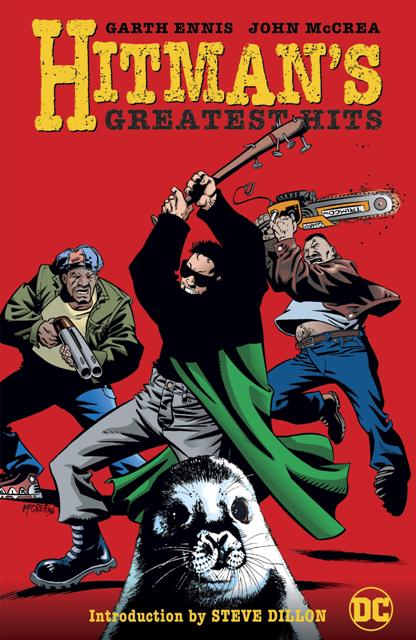 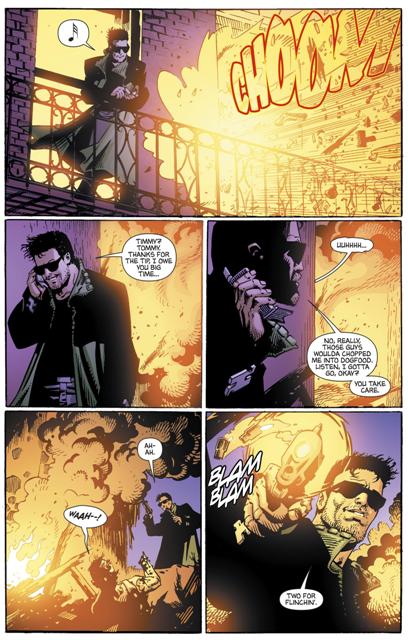 Anybody remember DC’s Bloodlines event in 1993? When parasitic aliens invaded earth and fed off human spinal fluid, sometimes resulting superpowers in the survivors? No? Not many do and it’s frankly better that way. However it did produce one of the best and underrated series of the 1990s DC era. Only Hitman, starring anti-hero Tommy Monaghan, outlasted and outgunned Bloodlines’ characters like Ballistic, Spark, Nightblade and other members of the “ugh” Bloodpack. Those guys passed in and out with as much notice as a fart in a nursing home. Hitman’s end left a gaping hole in DC’s line but has inspired a lot of attempts to fill it.

Hitman aka Tommy Monaghan debuted during his creators Garth Ennis’ and John McCrea’s run on The Demon. Funny and bold, (collected in The Demon: Hell’s Hitman) it was the perfect place to introduce Tommy.

Conceptually, Hitman worked because it was very funny, very irreverent and action-packed, but also included many touching moments, and it featured a superb line-up of supporting characters and guest appearances. Tommy’s life as a gun for hire in Gotham’s Irish district was hard, the stories always reflecting that but he had a code: Never hit one of the good guys and always help out where you can. The ideas Ennis came up with were the template for both The Boys and Preacher, while McCrea’s bright, bold and dynamic, hyper-stylised art helped define comics in that era.

Hitman’s Greatest Hits collects five tales of varying lengths, mostly one-shots. Included is Tommy’s origin describing his encounter with the alien Glonth, resulting in his obsidian black eyes and powers of telepathy and x-ray vision. In the sombre ‘10,000 Bullets’ Tommy faces down the Dubelz brothers and the assassin Johnny Navarone, marking the point where the creators knew which direction they were taking.

By contrast ‘Zombie Night at Gotham Aquarium’ encapsulates the bonkers fun side of the series, proclaiming that Hitman was not going to be like other DC titles. The award winning ‘Of Thee I Sing’ is a well written and illustrated satire featuring a soul-searching Superman who finds an unlikely agony aunt in Tommy. ‘Dark Side’ is a JLA crossover set after the events of the final Hitman book Closing Time, the Justice League facing a resurging Bloodlines threat so Batman recruits Hitman’s help.

Do any of these qualify as the greatest Hitman stories? No. Over five years and seven volumes, there are too many great stories to collect in one book, but all the tales in Hitman’s Greatest Hits rank very high, especially the last two, so the star rating is deserved. It doesn’t include the one involving Batman and a curry, that time Dinosaurs rampaged through Gotham or the real reason Tommy auditioned for the Justice League. Tommy’s encounter with Her Majesty’s S.A.S nor his visit to Ireland in ‘Katie’ aren’t included. Neither is his and buddy Natt the Hat’s awesome and hilarious team-up with Catwoman, Etrigan and Baytor. Educating Green Lantern on bar etiquette is missing and if you want funny ‘To Hell With The Future’ is a must. That’s just the ones off the top of the head.

Hitman’s Greatest Hits’ compact length is ideal for new readers and gives a small sample of what Ennis and McCrea did on the series. To fully appreciate Hitman’s brilliance, influence and legacy you have to read the series. If this collection doesn’t inspire you to do that you have no soul or discernible taste. 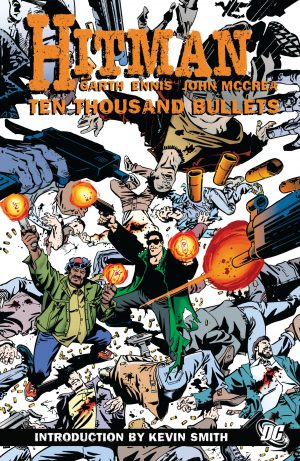