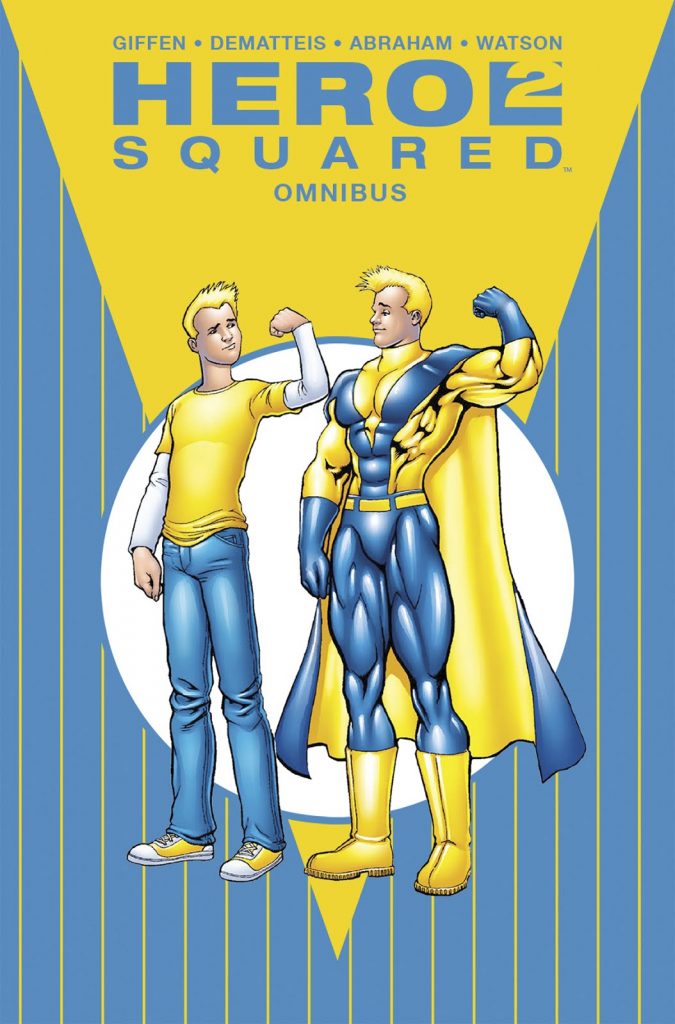 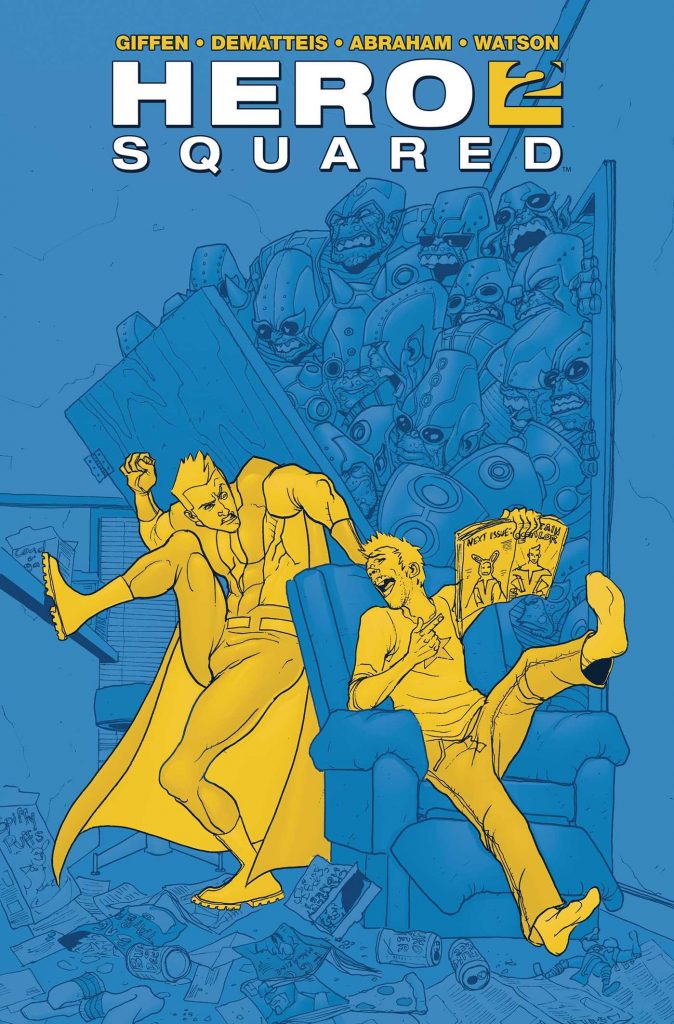 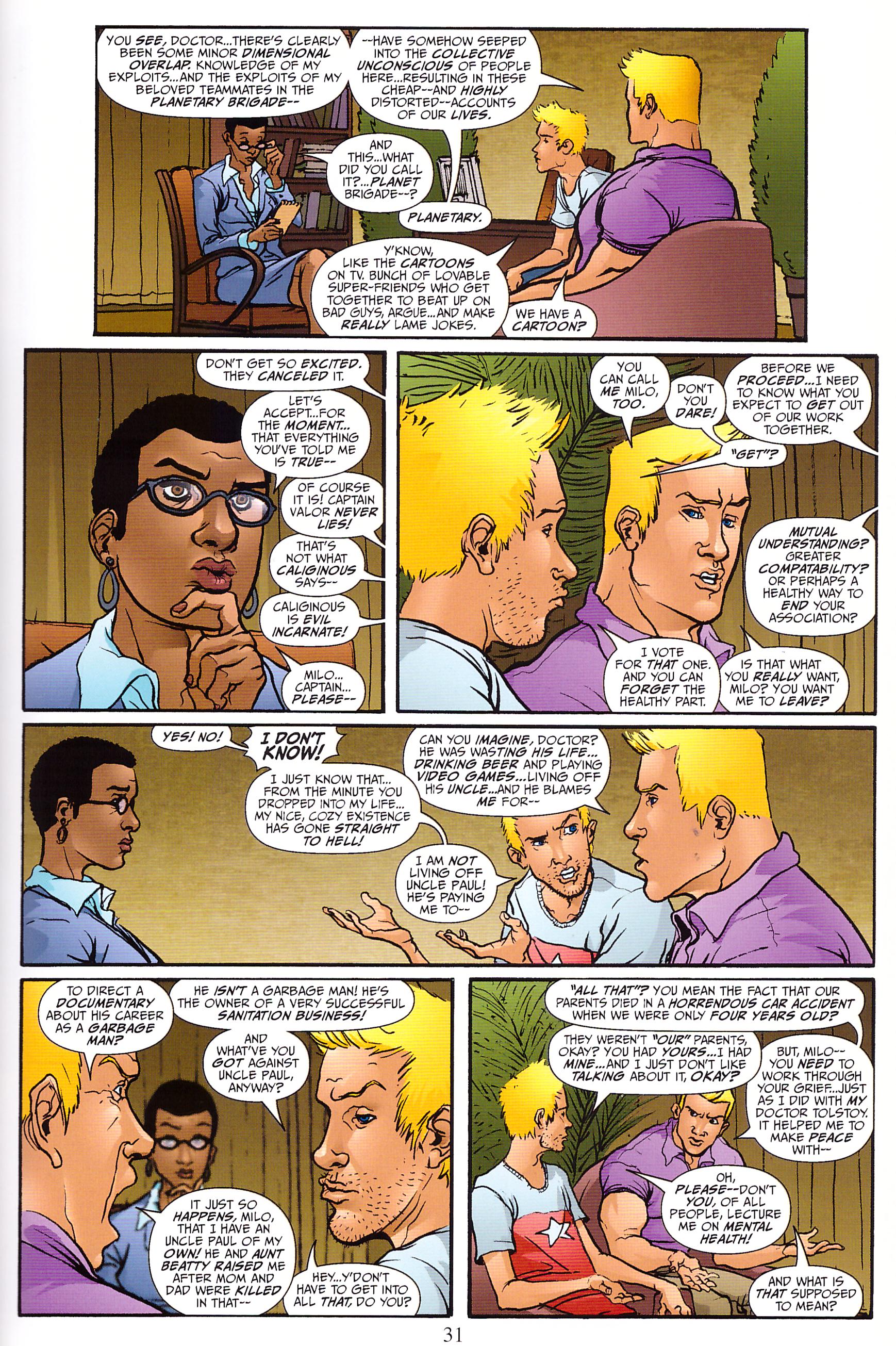 The writing team of Keith Giffen and J.M. DeMatteis are best known for their radical revision of the Justice League in the late 1980s, but fifteen years later they applied the same comedic approach to a different scenario. Hero2 Squared is also superb sitcom, and more people should know about it, Perhaps they will now that it’s been upgraded from the previous digest sized graphic novels to this traditional format.

The premise is that there’s a slob called Milo, who idles his life away while pompously critiquing the creative endeavours of others. He’s been working on his own documentary film, don’t you know. He takes his loving girlfriend Stephie for granted, and while basically good natured, has no motivation whatsoever. That’s on Earth. In an alternate universe Captain Valor is the world’s greatest hero. Milo skipped out on his equivalent of the museum trip where Captain Valor was first bestowed with his formidable super powers. Upholder of all that’s right and to be cherished, Captain Valor has a mortal enemy, and only survives the destruction of his own universe by skipping to ours. Caliginous, however, has followed him.

When Captain Valor discovers his Earth counterpart he’s annoyed and mystified, and the remainder of the series, which reaches a definitive conclusion, concerns the quartet of Milo, Stephie, Captain Valor and one other, who should remain undisclosed. They’re supplemented by some well conceived supporting characters, most prominently a superbly toadying alien villain and a therapist pulled beyond her comfort zone. From this Giffen and DeMatteis weave comedy gold with the continuing misunderstandings, revelations and whip-sharp dialogue. If you’d prefer more plot detail check Hero Squared, Another Fine Mess and Love and Death, but they’ve refined their formula and it’s consistently funny, spliced with the occasional surprisingly touching moment.

It’s not every artist who’s called upon to illustrate an entire chapter set in a therapist’s office, but Joe Abraham pulls this off excellently, while also producing good action scenes. His progression is visible over the two volumes that he drew, and it’s a shame he couldn’t manage the conclusion. Nathan Watson’s a decent artist, but not as good with conveying the personalities.

On his own world Captain Valor was part of a Justice League style super team known as the Planetary Brigade. His superheroic exploits as illustrated by Mark Badger in the main feature have a charm, but spotlighting the team’s adventures strains the joke too far. It might be thought that the Justice League expertise of the creators would ensure quality, but the difference is these are new characters, created as one-note jokes with no weight of familiarity. They are explored slightly in individual tales, and it’s surprising to see Fabio Moon among the artists, but this content rarely rises above average. Of the various artists used on this material, it’s Julia Bax that stands out, comfortably adaptable when it comes to altering her style for the needs of the strip.

Hero2 Squared is three quarters of a very good graphic novel, and a quarter of an average one that occasionally raises its game. Given the involvement of Giffen and DeMatteis that’s more than enough recommendation.