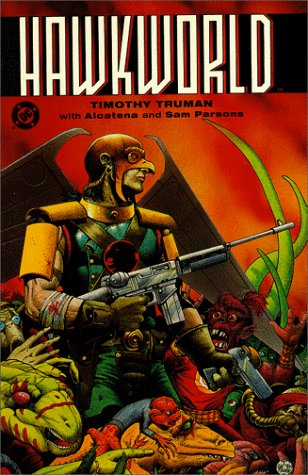 In the mid-1980s Frank Miller’s success with his radical reinterpretation of Batman in The Dark Knight Returns and John Byrne’s commercially successful re-boot of Superman encouraged DC to trust other creators with revising further heroes. Like Byrne, Miller and Mike Grell on Green Arrow, Tim Truman wasn’t a name associated with DC, but as they did, he come up with a viable new take on a hero with a past and a pedigree. Before and since, however, DC hasn’t ever managed to cultivate an audience for Hawkman beyond a few years at a time. Even in the 1960s the idea of a superhero who just flew was becoming dated, so he was transformed into an alien who arrived on Earth to study its culture, looking suspiciously human himself.

It’s the alien aspect that Truman builds on to reinvigorate the feature, both radical and engrossing as the political manoeuvring on Katar Hol’s planet of Thanagar provides the background. Thanagar has conquered every world in its vicinity, and enslaves the inhabitants of those worlds, condemning them to live in appalling conditions at street level while the privileged occupy the skies, both via flying technology and luxury high rise apartments. The social iniquity sits ill with Katar, intelligent and compassionate, who despises what Thanagar now represents. “We were a good people once”, he wistfully informs someone late in the story. Despite being born into nobility, Katar chooses to join the flying police force, his first missions deep in the bowels of the city where he sees the desperation of deprivation for himself. Hawkman had always previously been presented with Hawkgirl, and Shayera is duly introduced, but Truman’s applied as much thought to her as the remainder of Hawkworld, and she’ll surprise.

This is a fall and rise story, a three act tragedy, and to convince about the social conditions Truman needs to ensure a certain grubbiness about his art, which is superbly achieved as he populates the underworld with an imaginative selection of dispossed other races. His militaristic modifications to Hawkman’s frankly ridiculous previous costume work well as designs, and if he’s not as convincing when it comes to opulence, that doesn’t affect the story much. While the page layouts tell the story well, it’s strange that Truman only very rarely draws anyone as a full figure.

You need know nothing about Hawkman or his background before sampling Hawkworld, as Truman lays everything out. It’s a persuasive reboot, but self-contained and working well as an individual graphic novel.