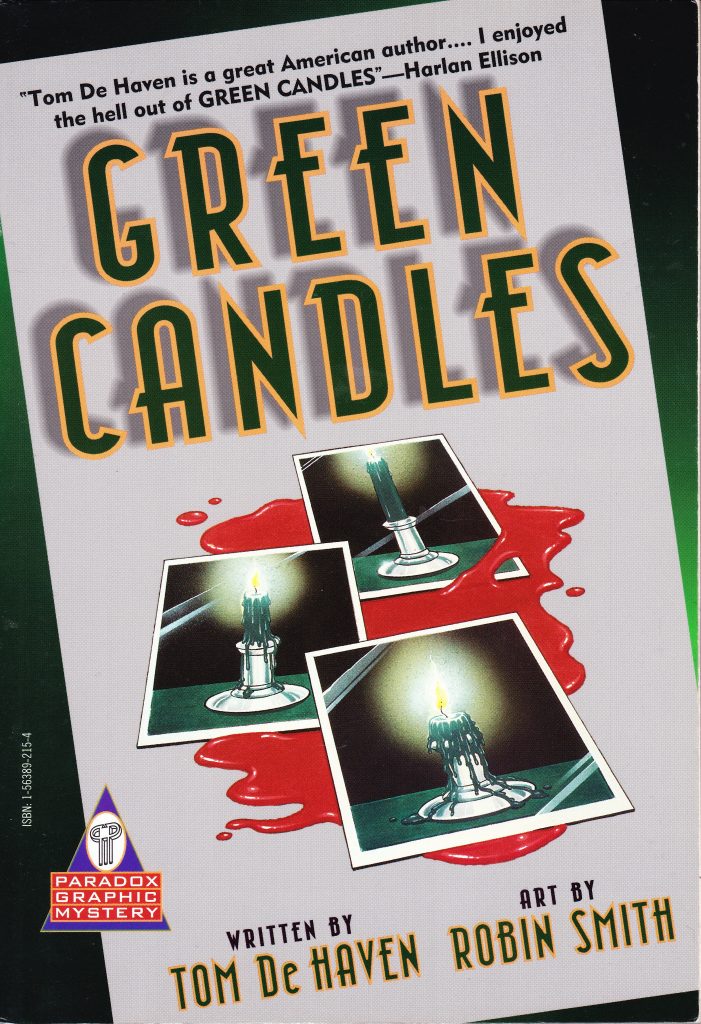 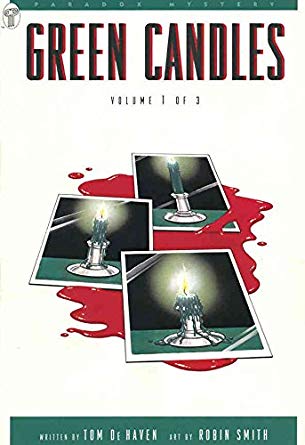 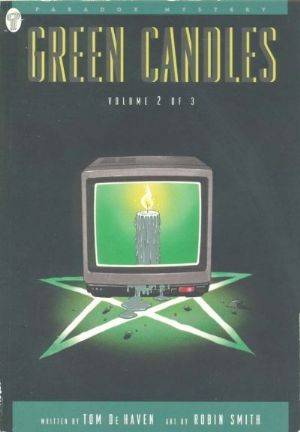 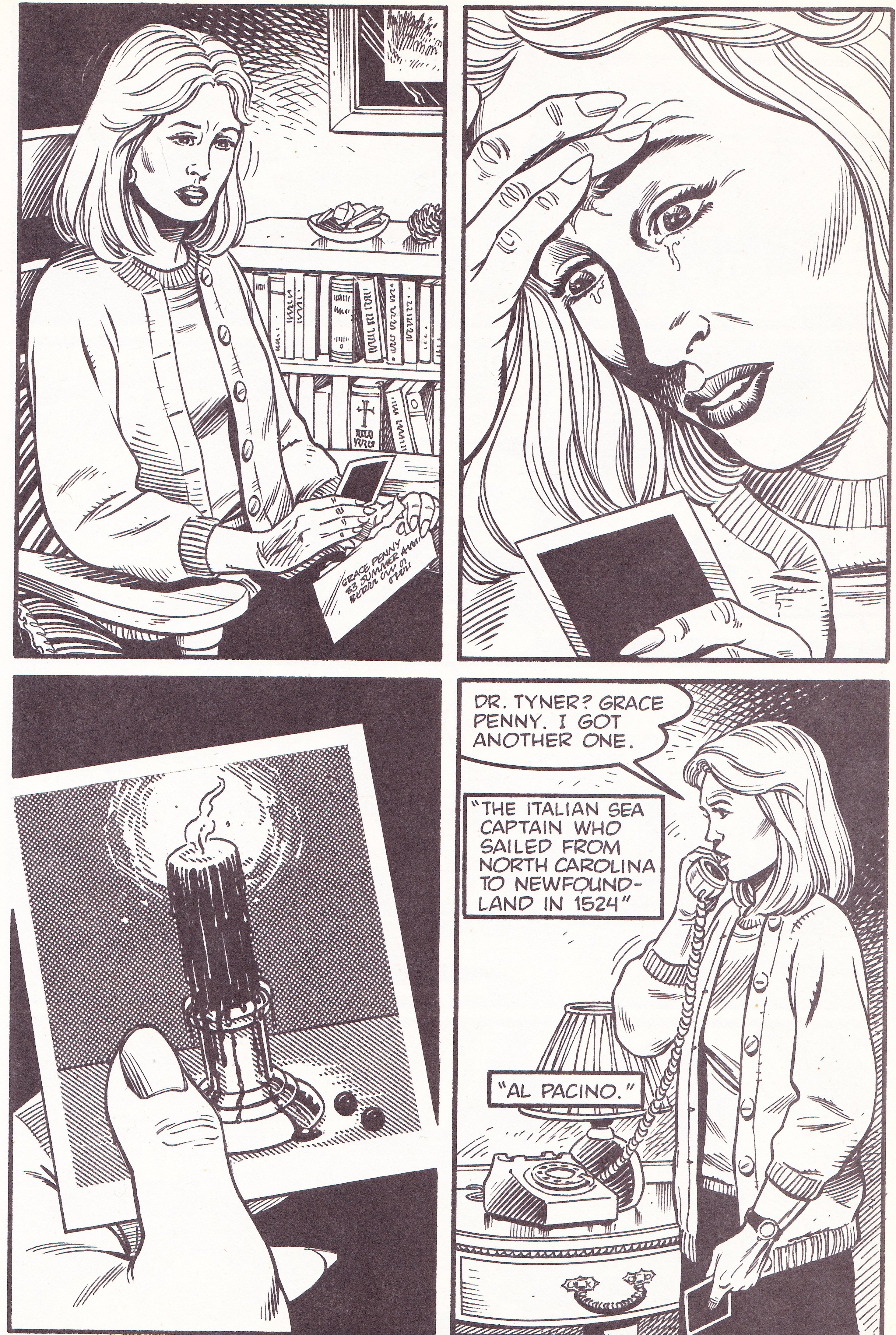 Paradox Press was a short lived DC imprint that published a number of critically successful stories within the broad sphere of the crime genre. Commercially it couldn’t sustain itself, but a handful of their titles were highly influential, including Road to Perdition, A History of Violence, both filmed, and Scott McCloud’s seminal Understanding Comics (the odd exception to the crime rule).

Written by Tom De Haven and illustrated by 2000AD alumnus Robin Smith, Green Candles – initially serialised as three separate volumes – is set in New Jersey during the 1990s. John Halting is a Private Investigator (“Cops don’t like it when you use ‘detective’”) with a reputation for getting things done, working for the Mayor trying to track down the man’s errant son. His work is unsavoury, but it’s a job and he does it well, mostly to look after his daughter Nina, who he dotes on, while trying to be nice to his ex-wife. He’s approached by Grace Penny who’s been getting photos in the mail, on each a green candle burning a little shorter than the one before. Grace claims to have remembered traumatic experiences from her childhood and the message is clear- when the candle stops flickering so do you. Is she exaggerating, merely making things up? John’s not sure but Grace is scared… and beautiful. When John starts asking more questions he starts to wonder what’s real and what isn’t.

The best way to describe Smith’s artwork is neat. Measured and clean, his illustrations are drawn very precisely, right down to how trees and windows are spaced. His cast move well and Smith is constantly changing perspectives. Initially they lack any real emotion with a noticeable lack of shade and textures to heighten the tension. This improves tremendously from chapter two onwards, resulting in an eerie environment, though these embellishments don’t necessarily extend to the dramatis personae. Smith’s art is efficient but nothing fancy or grandiose.

De Haven’s script fits the noir bill, a tough male lead protecting a beautiful woman with predictable tragic results. In one aspect De Haven is ahead of the game, attempting to incorporate psychological theory on memory recall and trauma popular at the time. If he had the benefit of the huge advances neuroscience has made since the beginning of the 21st Century, he would have a great deal more research with which to work on his ideas. In the mid 1990s his concepts were often sensationalised by the media, leading to them being dismissed before more recent research added more substance to them. Still, the plot fits together meticulously and plays out relatively smoothly. In its time, Green Candles would have been an interesting story tapping into the cultural zeitgeist. Now scientific advances render De Haven’s story as dated and a product of its era, especially when you consider how many good TV shows and crime novels currently make use of said science.

Green Candles may appeal to crime fans that appreciate the complexities of the genre, or are fans of De Haven’s prose novels. Like many of Paradox’s titles, it’s out of print but it is possible to track down used copies, some in the original three volume format, though these are rarer and more expensive. Second hand copies of the collection vary wildly in price, but cheap copies are available. 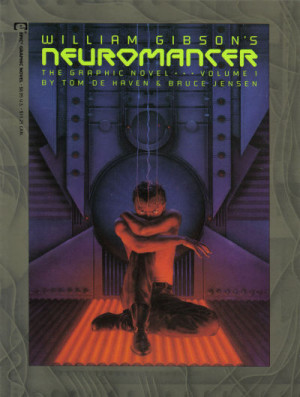 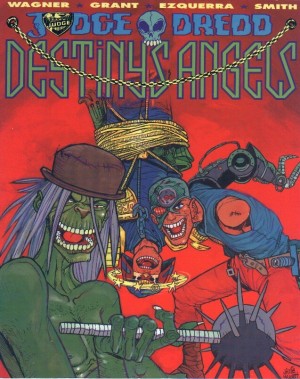