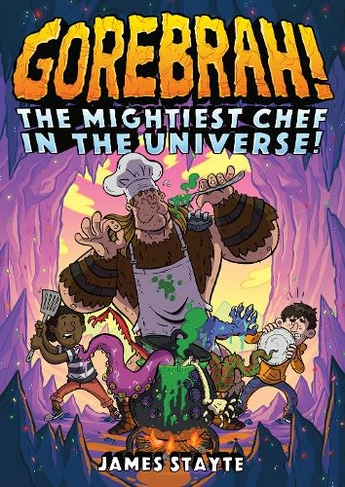 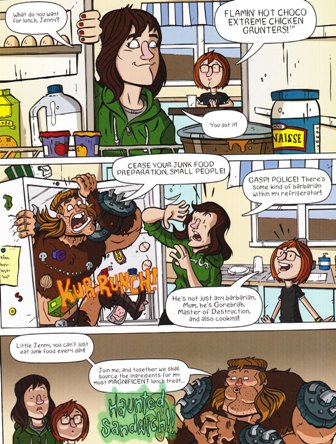 The Phoenix, a weekly comic produced by publisher David Fickling, has an admirable commitment to not only consistently provide quality new material but also present them in trade paperback. In this case it is James Stayte’s Gorebrah! The Mightiest Chef in the Universe!

What if Conan the Barbarian had featured cut scenes of a prime Schwarzenegger giving tips on how to prepare snake-god casserole or roasted wild hound stuffed with mushrooms? Considering some of the culinary scenes within that particular film, we’ll just stop there, but that’s exactly the core idea Stayte has for Gorebrah! The titular character is a comic book hero who bursts through walls to take his fans on adventures to find ingredients to fuel his passion for food, facing foes and culinary challenges along the way.

On the face of it that doesn’t sound very entertaining, yet Stayte provides the reader with a very clever parody of celebrity chefs and foragers. It’s not a “who” he is parodying but rather an attitude, that conceit of celebrity chefs that only they know where the best ingredients are, a confidence bordering on arrogance that no other chef can cook like they can. Stayte subverts that and the ridiculous sincerity fantasy writers can approach their often ridiculous themes with. Add a sampling of 1990s era Wrestling mixed with Bear Gryll’s style foraging, some fabulous illustration and you have Gorebrah!

Initially Stayte’s plots are short simple predicaments Gorebrah solves, usually questing for ingredients or sampling dishes ranging from the macabre ‘Zombie Lasagne’ to the silly ‘Haunted Sandwich’ and the oddly charming ‘Mushroom Goat’. Comedic effect is what he’s largely aiming for, something a cartoonist of his skill manages easily. As he draws to the middle of the book the creator is able to experiment with longer sagas demonstrated in ‘Omelettes, Get Ready to Rumble!’, a serial where Gorebrah enters a gladiatorial style contest to become the Most Excellent Expert Chef in Existence. Artistically it’s fabulous and takes the story on a different trajectory that arguably affects the gag ratio yet shows promise for future stories. This is a series that is developing and, if more books are planned, should only get better.

Every story in Gorebrah! The Mightiest Chef in the Universe! produces a chuckle, humorously drawn with great expression. Like many of its counterparts featured in The Phoenix stable, it has an pleasingly irreverent streak that kids delight in. That obviously doesn’t appeal to everyone and some would take exception. Let’s reiterate something: IT’S FOR THE KIDS. If silliness isn’t your bag, take your grumpy pants attitude elsewhere. James Stayte and the rest of us are trying to have fun!