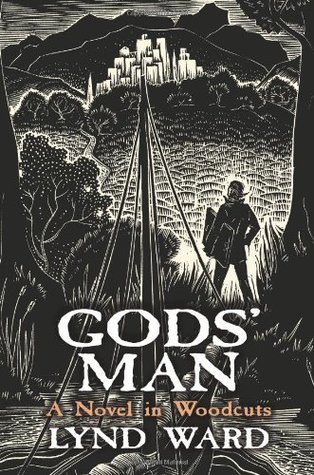 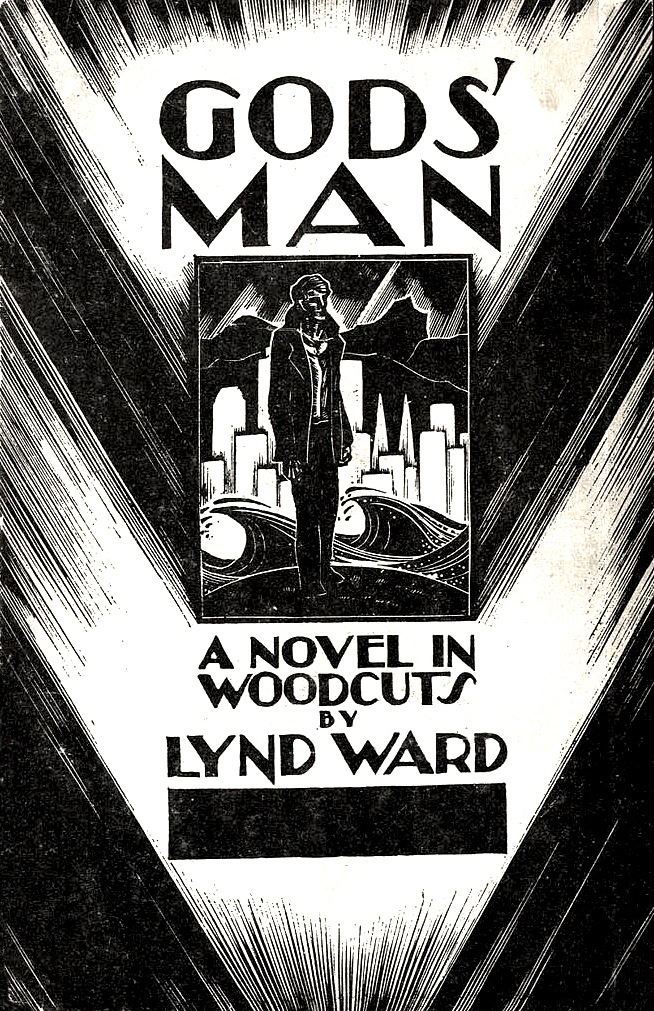 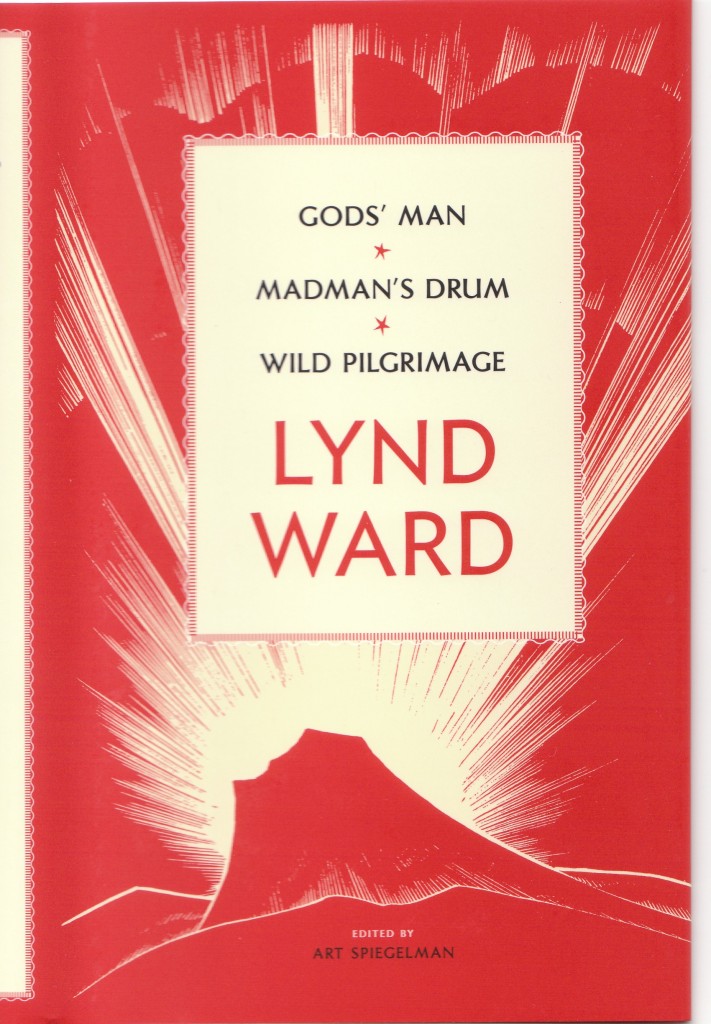 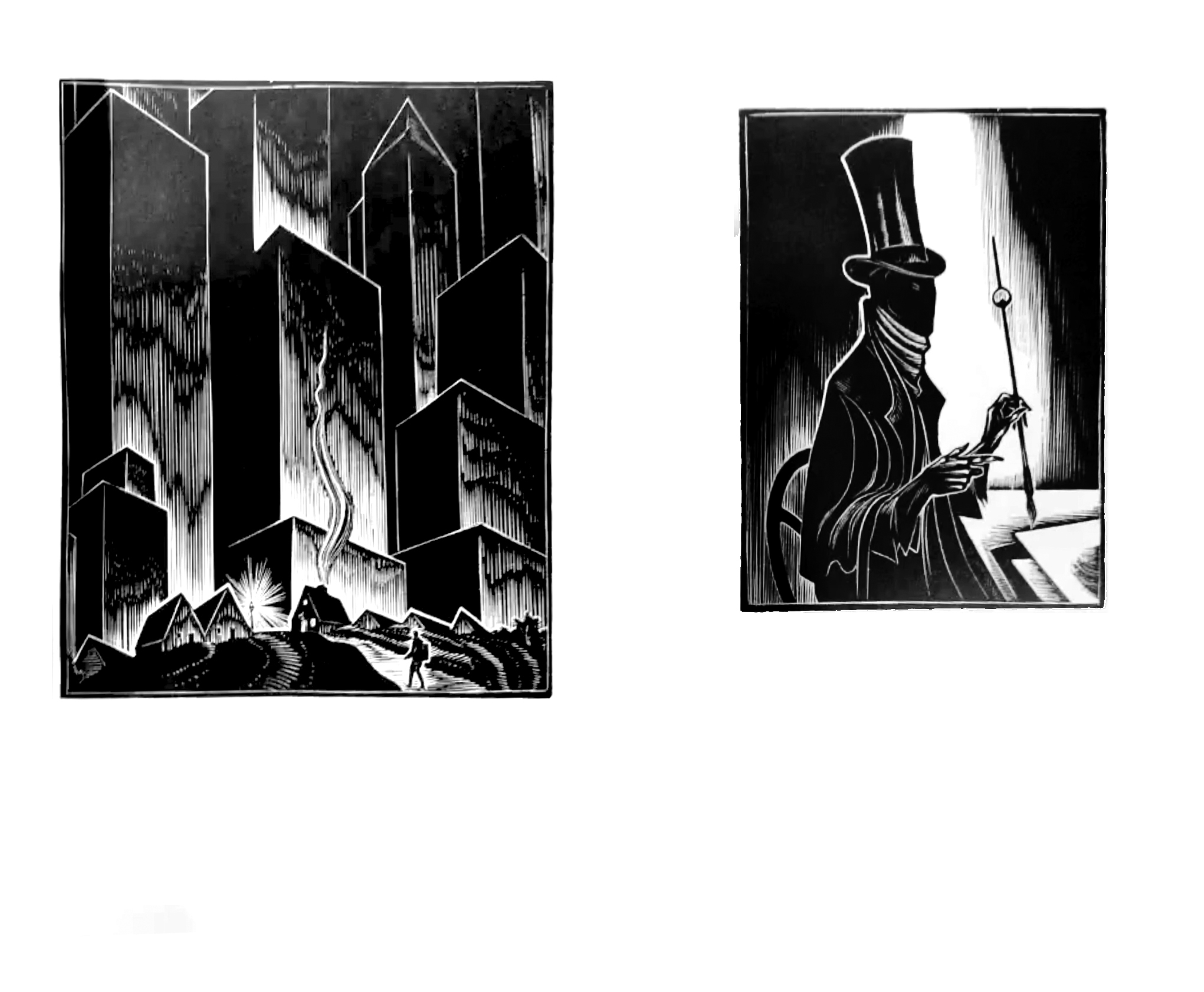 Gods’ Man was created by Lynd Ward and published in 1929. It was the first wordless pictorial narrative to be produced in the USA, following in the paths of European artists Frans Masereel who created the earliest wordless narratives with 25 Images of a Man’s Passion (1918) and Passionate Journey (1919), and Otto Nückel whose book Destiny (1925) was a direct influence on Ward.

The layout of the book, like Masereel and Nückel’s, is typical of a printmaker: there is one woodcut image per spread, always on the right-hand page, and the images are black on white. Woodcuts are made by removing material to leave behind raised impressions. The more skilful the artist, the thinner the lines can be, but there is usually a balance between open and detailed areas and solid black areas for impact. There is an Art Deco feel to Ward’s design, with strongly angular figures and bold geometric lines. The images vary in size and shape according to what is happening in the story, but they are mostly small squares and rectangles, framed by white space.

This novel without words is the story of an artist, who arrives in a big city ready to make a living from his work. He has no money for food and tries to barter with his pictures. A mysterious patron sees his potential and in return for his signature on a contract, gives the artist a pen which has been used (or one just like it) by writers, sculptors and artists through the ages from Ancient Egypt and Greece to the Italian renaissance, to produce great works. The artist takes this pen. His work begins to attract crowds and he becomes very successful. But can he maintain the purity of his vision when there is temptation all around him?

Gods’ Man is beautifully drawn, and Ward’s imagery is gorgeous in design and execution, but it’s obviously very difficult to indicate internal thoughts without words, so the artist’s problems are mostly external temptations or exaggerated villains, such as the symbol of mammon he discovers branded onto the naked shoulder of his mistress. This reliance on unsophisticated stereotypes as a way to get ideas across and move the plot along makes the narrative annoyingly crass, and the outcome very predictable. The ending possibly raises more questions than it answers about the motivations of the mysterious patron, but it’s a great final image.

Will Eisner was an admirer of Ward’s work, calling him “perhaps the most provocative graphic storyteller of his century”. Although that approbation doesn’t hold up at all, Gods’ Man is definitely worth reading for its place in the history of graphic storytelling and for its style and visual power. It’s very accessible and understandable for readers of any age who are interested in comics, although parents should note the ‘adult material’ advisory on this book refers to three pictures of the artist’s mistress, whose breasts are visible when she models for him, nude.

Gods’ Man is also available in an omnibus of Ward’s work published in 2010 by the Library of America. Lynd Ward: Six Novels in Woodcuts, features all his wordless stories with a timeline and overview of Ward’s life. It has an introduction by Art Spiegelman.