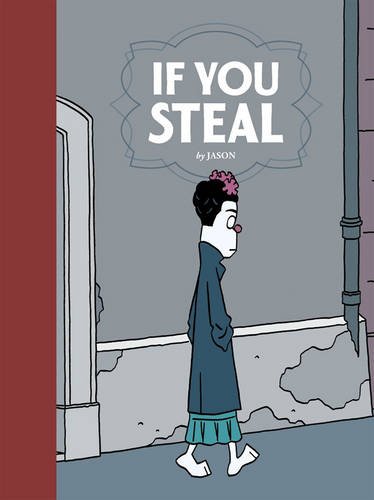 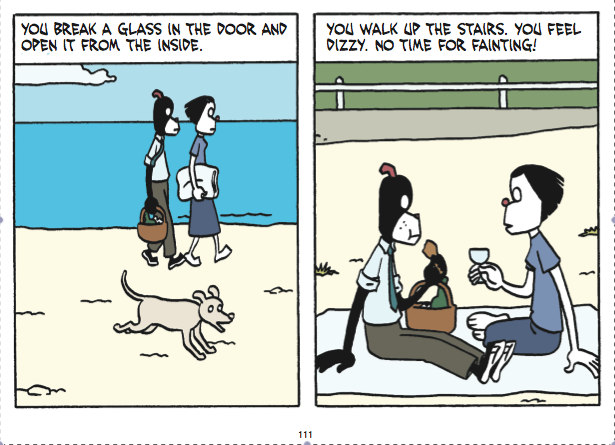 If You Steal is a collection of short stories by Norwegian born Jason. Unlike Almost Silent and What I Did, this is previously untranslated material.

Jason draws in an economical style that presumably enables him to work quickly. There are no visual fireworks, but it’s far better than the weak cover indicates, as details like props and settings are convincingly reduced into the style. The colours, by Hubert, are flat but subtle, and he uses different palettes for different scenes and settings.

The book starts strongly with the title piece. We see the aspirations and desperate circumstances that led to the theft. We see the process, things going wrong, and the aftermath. But we don’t see them in that order. The ending with images taken from surrealist painter Magritte, is cryptic, but perhaps it needs to be: the previous scenes have been clear enough. We’ve seen the consequences and there’s no need for a moral conclusion. ‘The Thrill is Gone’ near the end of the book seems a companion piece.

The book’s title is perhaps an ironic acknowledgement of his ‘tributes’ to other artists. In the cover story Mexican painter Frida Kahlo is an assassin. His vampire version of the book/film Night of the Hunter is amusing, if slight. In Samuel Beckett’s play, two men are Waiting for Godot by an isolated tree. They talk, they ponder, they speculate about the one they’re waiting for. Jason’s ’Waiting for Bardot’ is a relatively convincing pastiche, but it’s a woman they’re waiting on. They ponder women: “She’s probably buying shoes or something… or painting her toenails”. Still they seem sad, unworldly men, genuinely unknowing rather than simply stereotyping.

Most stories explore male and female roles and relationships. A masked man climbs through the window of a chateau and fights off all manner of B-movie villains to rescue a woman – presumably star of Mexican movies ‘Lorena Velazquez’. The conclusion is less cryptic than the other stories, but has a charming twist. In ‘New Face’ an escaped criminal finds a woman who was at his trial, and who sent him letters. It’s written in a menacing second person voice: “It’s only a matter of time before you are recognised.” After plastic surgery there’s a tense wait to see the results, and then the text and images diverge to pursue quite contrasting scenarios. There’s a fun series of romantic dramas in the form of covers of fake comics named after tracks on Van Morrison’s album Moondance.

‘Ask Not’ starts at Stonehenge in 2583 BC with a sacrifice and prophecy of another death. This one’s less cryptic than condensed. There’s a lot conveyed through brief but telling glimpses into famous lives and events. The title refers to the famous quote by Abe Lincoln, and later JFK. Both presidents appear here, and that’s not all they have in common. It takes until 2003 AD to see if the prophecy is true.

The book ends, appropriately, with ‘Nothing’ a poignant story of a woman’s dotage. Anthropomorphic bird creatures piece by piece take things from her life. They look like bald eagles, but could be vultures – suggesting she is being preyed on. But that seems too literal and simplistic a reading to end this book of mysterious and poetic stories.

There’s nothing to easily compare to this. Jason wears his experimentalism lightly, and delivers an engrossing and intriguing book that leaves us with mysteries more than solutions.

With its minimal text this could seem a quick read, but take your time, and it’s one you could often come back to.