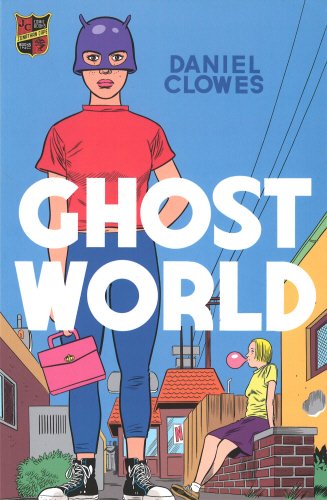 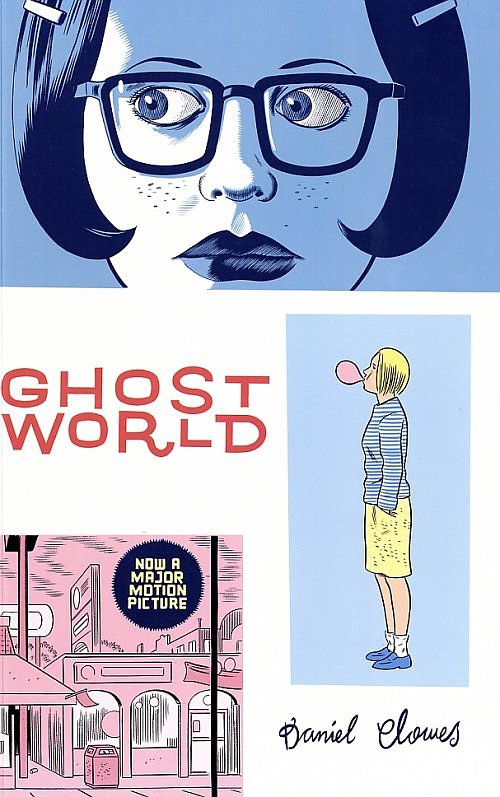 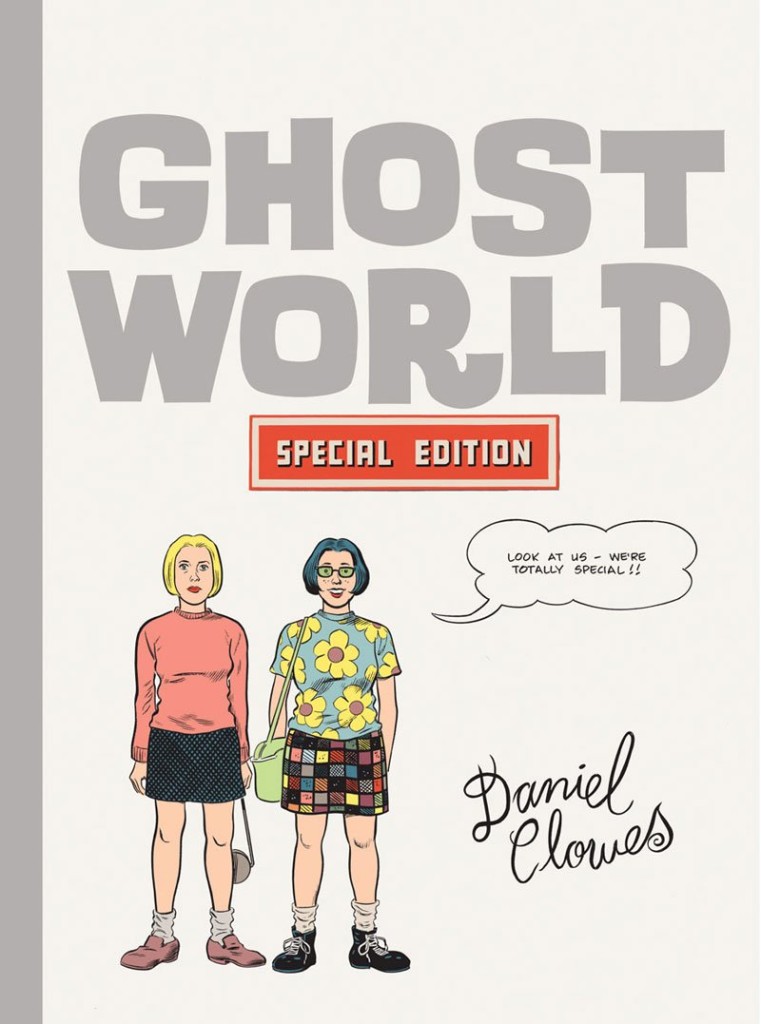 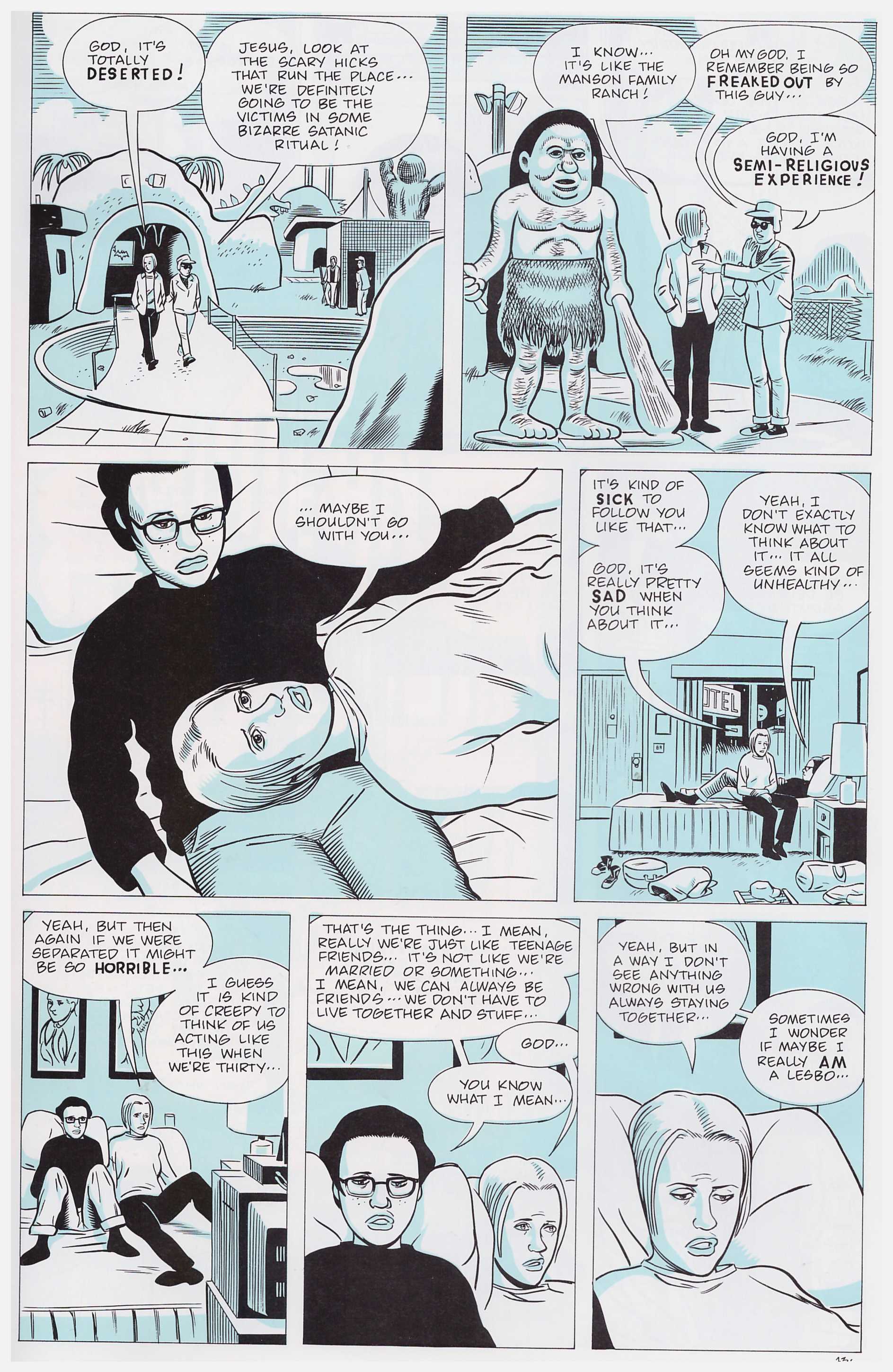 Ghost World was a milestone in graphic novels reaching a young hip audience, who presumably identified with eighteen year-old outsiders Enid and Rebecca. Enid is witty, painfully cool and self-conscious, Becky more ‘nice’ – a straight foil. A debt to Maggie and Hopey from Jaime Hernandez’s already canonical Locas is perhaps more obvious in hindsight. Begun over twenty years ago in Eightball, it was filmed, and that’s now over fifteen years old. Graphic novels have come a long way since then so, how does Daniel Clowes’ book stand up today?

Well, it seems now to be Clowes’ archetypal work – a template, even – but at the time it was something of a departure. He was best known for Lloyd Llewellyn‘s arch humour, and most acclaimed for Like a Velvet Glove Cast in Iron – a waking nightmare of the 20th Century.

There’s nothing supernatural about this ‘ghost world’, but, as in Glove, it’s peopled with oddballs, and rooted in the stranger fringes of outsider culture. Here though, it’s less an inescapable nightmare, than a shopping trip for lifestyle options. The girls follow a couple they’re convinced are satanists; go to an adult bookstore, a ‘bad fake retro’ diner; a run-down theme park, and so on. In a mean prank they respond to an older guy’s lonely hearts ad, just to watch his hope turn to disappointment. Does any of this make them more real, authentic or fulfilled people?

Enid Coleslaw, and presumably Clowes himself (spot the anagram), feels a fish out of water in the straight, mainstream world, yet is unconvinced by the alternatives. An encounter with the editor and a contributor to Mayhem magazine, leads to a revelation dispelling any illusion of the intrinsic moral superiority of ‘alternative’ culture.

Ghost World, when serialised, seemed a set of self-contained picaresque encounters. Yet each builds up the pressure for the characters. In ‘Norman Square’, a man waits for a bus that may never come. He eventually leaves, but the theme of departure remains, as Becky learns Enid is secretly thinking of leaving for college. This leads them to evolve and respond in ways that they themselves don’t have the insight to fully understand, but ring true to readers.

The characters are visually distinctive, while only subtly caricatured: the heavy-featured Enid contrasting with the blandly good-looking “aryan” Becky. As they sprawl on the floor, sneer, puzzle, and anticipate their latest scheme, Clowes brings to life their deep, but almost blokishly defensive, friendship. Clowes’ rendering and compositions are typically dry, his tonal balance a bit washed-out: here though, it evokes the ‘ghostly’ unreality of this ‘world’.

The central question, as with Locas, is: are the two girls the best relationship unit, which no guy will live up to? Their interactions with only-decent-guy-in-town Josh, ultimately seem extensions of their complex and changing relationship with each other.

Every aspect of this book seems integrated and complete, down to the logos and peppermint ‘duotone’ overlay. The result is an individual, quirky, but ultimately believable vision from a single creator. Perhaps that’s what stood out against the focus-group diluted products of Hollywood.

Ghost World won an Ignatz award for Outstanding Graphic Novel. Perhaps in those early days it just looked like an ‘alt comic’ rather than what’s now a very specific type pioneered by Jaime Hernandez? However, it’s still well deserving of its own ‘classic’ status, and a high water mark for Clowes. Today the niche sub-cultures would live in the internet, but that’s the only thing that dates it.

A special edition hardback has extras, including Clowes’ screenplay for the film.