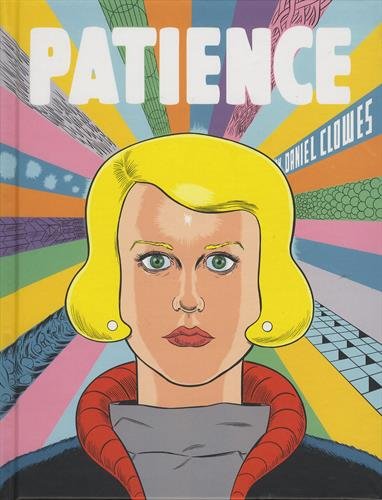 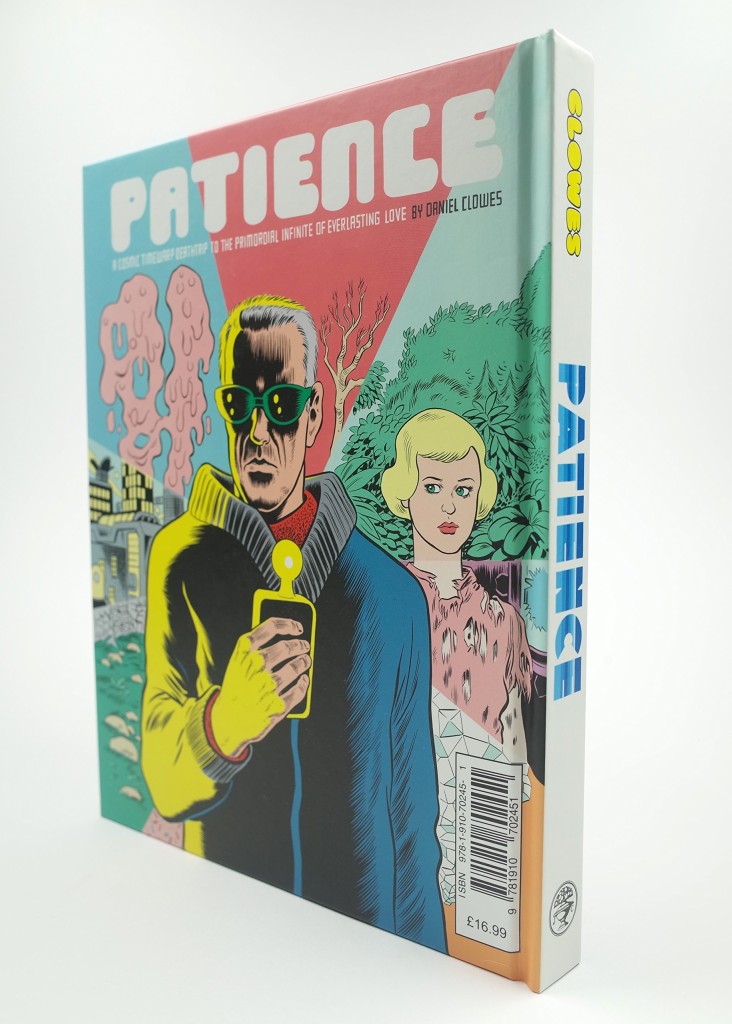 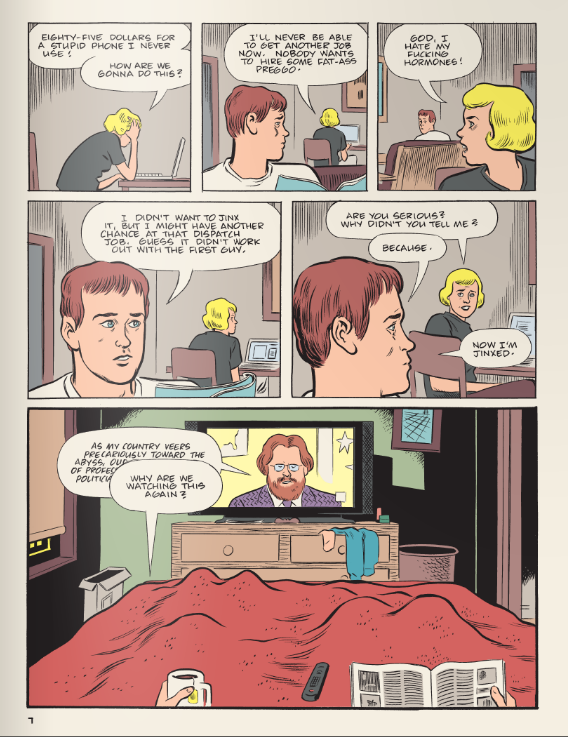 Daniel Clowes began his career providing the experience of the young, the disenfranchised, and the alienated, his books generally well received by public and critics alike. In later material the characters have reflected Clowes’ own journey into middle-age – without losing the alienation!

Coming six years after his last, the aptly titled Patience has been for many, one of the most anticipated books of the decade. So does it live up to it?

Fantagraphics’ blurb describes it as “a psychedelic, science fiction love story” – which is mostly accurate, if perhaps over-emphasised for column inches. It may also have some of those ‘patient’ fans worrying that they’re not actually going to get a ‘Daniel Clowes book’! They can stop worrying though.

Clowes is associated with well observed naturalism, but that’s not where he started. His first major work Like a Velvet Glove Cast in Iron, was a dream-world from the darkest recesses of the 20th Century psyche. The Death Ray, fifteen years later, used science-fiction elements in a still very human story, and is the most direct precursor of the current volume. Patience continues Clowes’ thematic arc – using the device of time-travel, to tell a story of youth (literally) revisited in middle age.

Patience is the young woman on the cover. In 2012 she’s just found out she’s pregnant. She has a husband who loves her, so surely together they can work through their financial struggles and difficult histories? Unfortunately, a tragic event changes everything, leading to an obsessive, decades long quest for answers and revenge. When, in 2029, the protagonist stumbles on a means of time travel, it prompts a return to the past, seeking resolution. This is Clowes’ most sustained, and intricately constructed book yet. Although the heavy ‘voice-over’ captions mean that a lot is told rather than shown.

Clowes takes what his story needs from the sci-fi elements, while making light of them. The time-traveller only has the most basic grasp of stolen technology – so doesn’t talk at us about it, beyond the now well-known concerns over the implications of affecting the past. The other (unexplained) futuristic device (shown – back cover) seems a combination of advanced smart-phone and the Death Ray from the earlier book.

If the story is his most ambitious, the art sadly isn’t. Clowes has always been a slightly dry artist, but his early work compensated for that with nervy energy and obsessive detail. Latterly, though, the drawing has seemed less important to him. Here, the compositions are routine, and the lines vague – tapering to nothing. Even the future settings don’t seem to inspire him much. He’s surely aware enough of previous mis-predictions of the future to know 2029 is unlikely to look that different from now. The touted ‘psychedelic’ elements, are the time travel itself, which aims to channel Ditko. Wittily ironic, or just half-hearted? You decide.

The colour adds clarity, but little more beyond a few night-time palettes and the generally brighter future scenes. It doesn’t come close to, say, the similarly flat, but far more nuanced palette in Charles Burns recent trilogy, but then not much does.

Patience is a fresh take on the time-travel genre, and a page-turning human story, so most readers won’t be  stopping to critique the artwork. Ultimately, it’s a welcome addition to the Clowes canon.