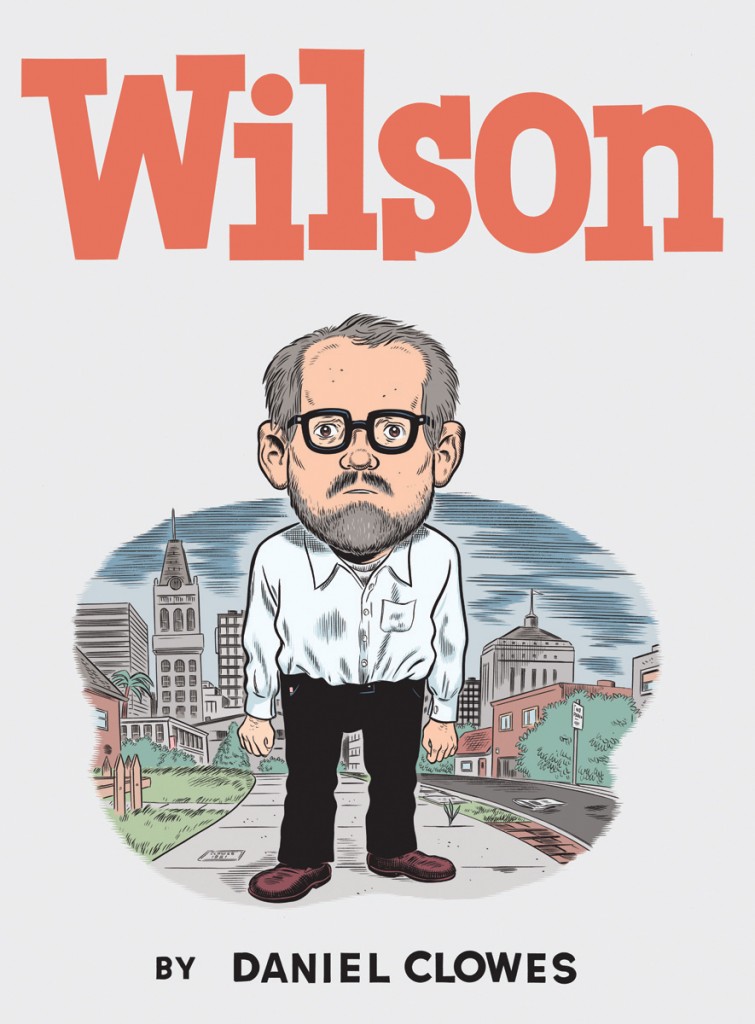 The blurb on the back of Wilson describes the protagonist as “100% Wilsonesque”, presumably an ironic way of saying he’s a typical Daniel Clowes creation. Wilson is an alienated outsider, making wry observations on the world while trying to connect with people. Unlike Enid and Rebecca with their lives ahead of them, in Clowes’ earlier Ghost World, Wilson is middle aged and sensing it’s his last chance.

Famous for capturing the experience of youth, Clowes was himself approaching Wilson’s age when he produced this. Like Charles Burns and other creators in Spiegelman and Mouly’s influential Raw anthology, Clowes combines a fascination with US popular culture with an ironic worldview.

It’s possible the success of the Ghost World film in 2001 freed Clowes from the demands of a regular title, as well as creating other opportunities in film. In 2004 he ended Eightball, which had seen the seralisation of his previous long-form works, and Wilson was his first book published as an original graphic novel, rather than a collected serial.

Wilson is in the form of a series of single page episodes in varying art styles. Each with their own title (‘All Alone’, ‘Out of the Blue’, etc). He used a similar technique more purposefully in the earlier Ice Haven, but it sits comfortably here: there’s little physical action, so the varying styles add some visual appeal. That said, it does seem as if Clowes is coasting here. The art does its job: it conveys facial expressions and body language but without much enthusiasm, and Wilson lacks any single great pages.

Each page has a punchline, or almost an ‘anti-punchline’ where the surprise is often the cynicism. The first page (titled ‘Fellowship’) is a good example: we see Wilson out with his dog. “I love people! I’m a people person! Every single one of us has a story to tell…” He starts a conversation with another dog walker, and four short panels later he’s changed to “Don’t you ever shut up!”

As the book progresses we see a more sympathetic side to Wilson, though, his own losses and let-downs, his love for his dog. His attempts to revive relationships fail, and it’s not all his fault.

One of Clowes’ greatest strengths is his character writing, his sharp observation and frank depictions of people, including the cynical and selfish aspects most of us have. He resists easy moralising by just unflinchingly following his characters, and lets us make up our own minds. In Wilson he’s nailed lonely middle age. All of that is still relatively uncommon in graphic novels, and Clowes does it convincingly enough to make up for the slightly lacklustre art in this book.