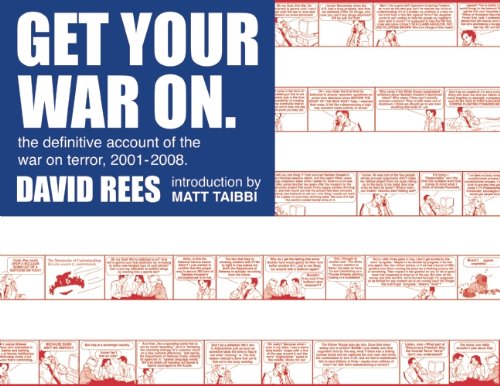 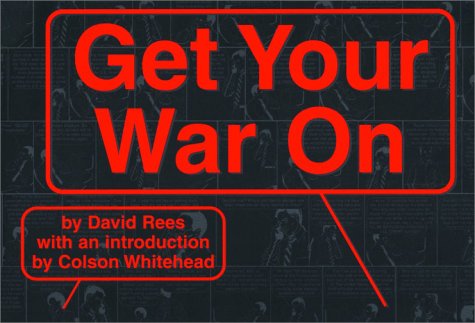 One of the defining features of the USA’s response to the September 11, 2001 destruction of the Twin Towers was the way language became weaponised as jargon and euphemisms overtook the media, warping the ability to honestly describe what was happening. David Rees’ Get Your War On tackled the debasement of public discourse head on, using the style he had honed in his previous strips My New Filing Technique is Unstoppable and My New Fighting Technique is Unstoppable to devastating effect. The drawings are bland clip art of businessmen and women at their desks, using their computers or talking on phones, but rather than selling some product, they spout angry, sarcastic and hilarious responses to the War on Terror. The subversive combination of styles creates an incredibly effective rejection of government approved ‘official’ newspeak as the characters say what everyone is thinking, voicing the rage and despair that was generally deemed too unpatriotic to express in public.

This is a compilation from the two volumes of Get Your War On and Get Your War On II that cover both the Iraq invasion and the war in Afganistan in devastating, funny and terribly bleak conversations between friends and co-workers. The extreme profanity of the protagonists seems like the only way to truly get across what insane times everyone is living through, which turned some readers off GYWO even as it drew others to it. This book is incendiary in its righteous anger and an absolute must-read for anyone who wants to understand the years of the Bush Doctrine and Weapons of Mass Destruction. The best summary of its contents are these two panels from September 11, 2003 when sarcasm and jokes failed Rees, for once:

Woman: “You know what I’m sick of? I’m sick of my cousin being dead.”