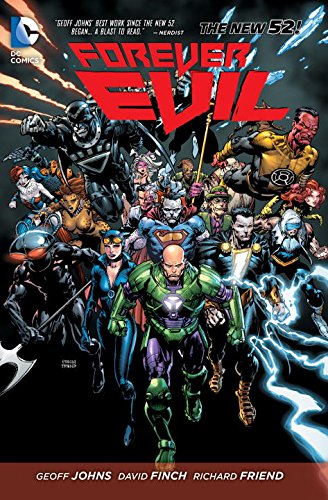 DC continued to publish crossover events once they re-booted their continuity as ‘The New 52’, but these were initially restricted to individual groups of titles. Forever Evil spilled across the entire line of superhero comics, with this being the core narrative.

It opens with Lex Luthor exonerated of culpability for crimes of which he stood accused and regaining control of his corporation. He’s due a surprise, though, as are many others as they apparently see their superhero foes freeing jailed villains. All those freed are supplied with a communication device and an invitation to join the Secret Society. The featured image, enticingly presented as a gatefold spread, shows them all on board. It’s not kept a secret for very long that those organising the Secret Society are the Crime Syndicate, evil analogues of the Justice League from an alternate Earth who consider this one ripe for the taking. They’ve disposed of the League, and disconnected the world’s power.

The Crime Syndicate, though, have a larger purpose that they’re not revealing. This series focuses largely on their activities, while associated chapters featuring the villains they’ve united appear in individual collections of their superhero foes. It’s a welcome demarcation, as all too often with the New 52 graphic novels understanding a crossover story required buying several other books.

The other major character is Luthor, accompanied by a modified version of Bizarro, for whom the series is a transformative experience. For once Luthor must genuinely be the person he pretends to be, and he gathers disenchanted villains around him, but Batman also has a plan…

David Finch’s layouts appear to suffer from shortage of time from the midway point, but he’s now an old hand at superhero conflicts and well able place his short cuts between pages good enough to distract, and some spectacularly better than that. Geoff Johns also knows what he’s doing, and turns in a professional, if not quite compelling, tale of desperation, hope and redemption, which improves as it continues, with quite the suspense about the final chapters.

To make an old-fashioned complaint, the dialogue is unduly coarse in places. Does a character being instructed to unclench their anus really add anything? It’s half-hearted, unconvincing, and as as quaint as this complaint considering the graphic carnage and atrocities depicted.

Forever Evil supplies a complete story, but for those interested there are several tie-in graphic novels, but only Rogues Rebellion comes close to matching this. 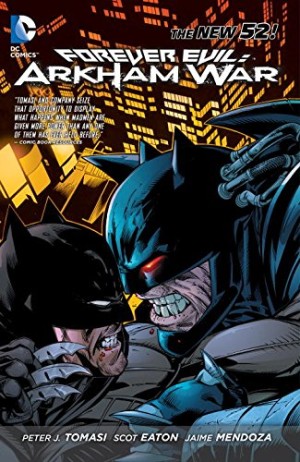 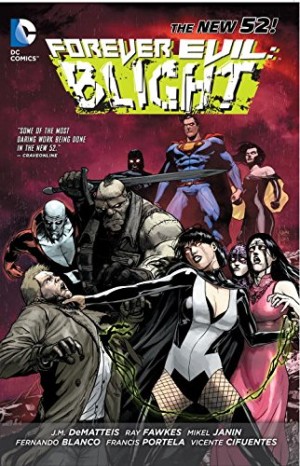