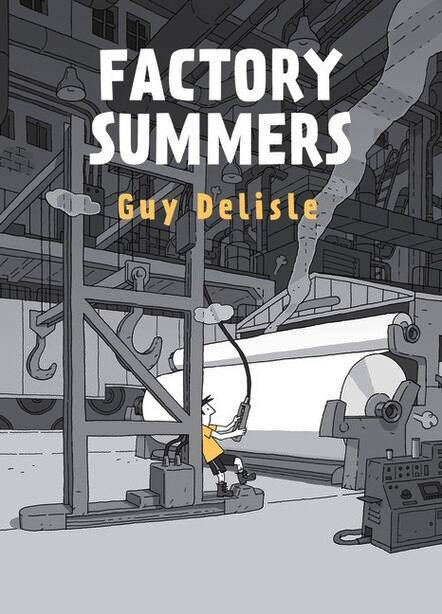 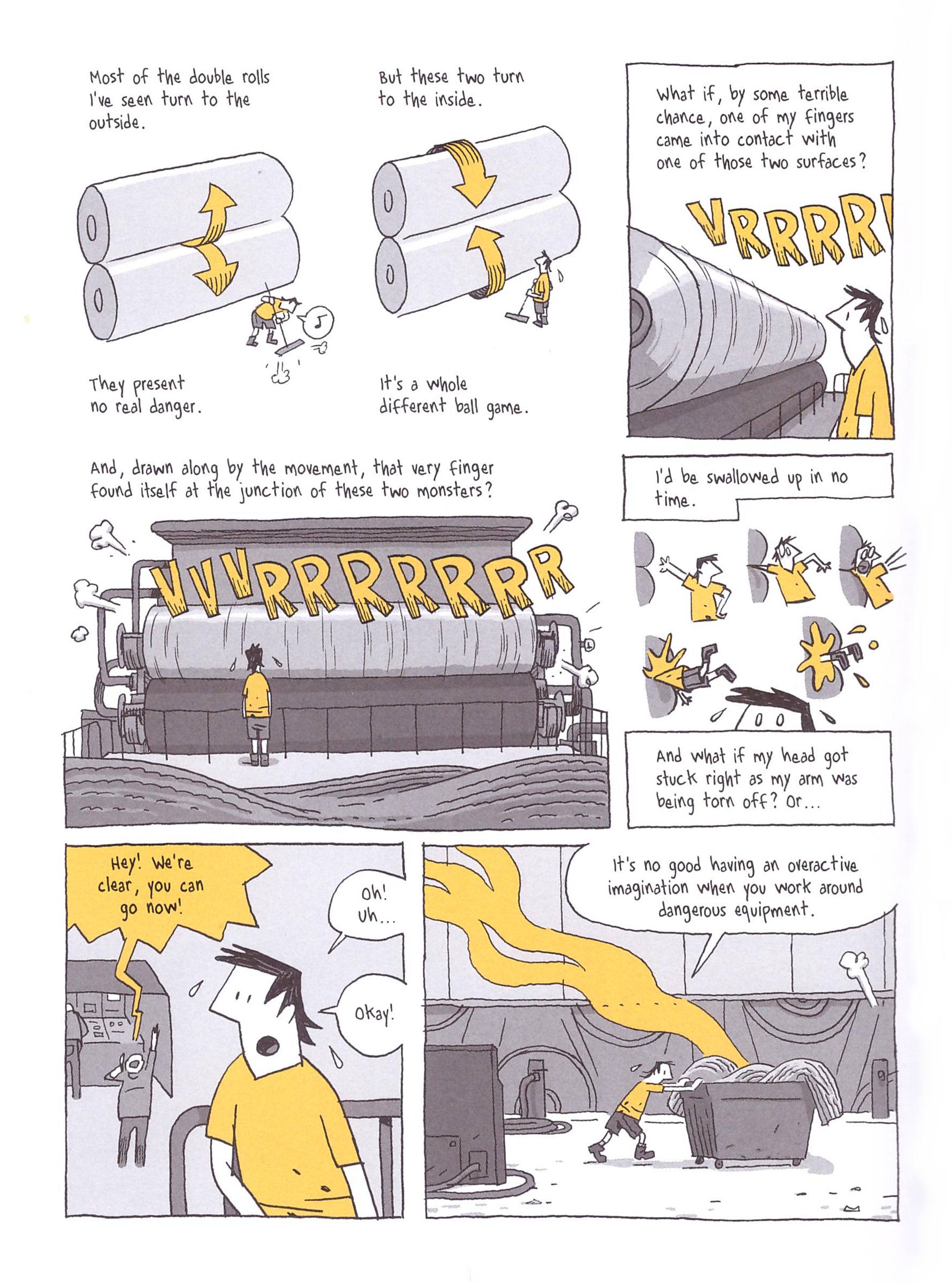 Guy Delisle’s greatest acclaim has been generated by four reportage graphic novels presenting his view of life in what to most readers will have been exotic lands (see recommendations), and while his other work has been well enough received, it’s not matched those travelogues. However, Factory Summers is a return to the theme of a stranger in a strange land, as Delisle recalls his 1980s summers working in the vast paper mill that dominates the Quebec waterfront. It’s an environment that relatively few – if any – readers will have experienced, and large enough to have developed its own internal society with unique procedures.

Delisle excels at showing the sheer immensity of the fixtures and machinery, vast rolls of paper propelled through a system of checks and dwarfing the checkers, with steam a constant accompaniment to the eternal noise. Pre-dating digital printing, when Delisle was employed the technology was over fifty years old. It instils a constant sense of foreboding regarding accidents, as the chances of surviving intact are extremely slim if sucked into the machinery or should something of that bulk fall, and stories circulate of those who’ve had accidents.

When not at the paper mill, Delisle works through an animation course in Toronto, and picks up the same French comics reference book as his fellow French-Canadian cartoonist Michel Rabagliati in Paul Joins the Scouts. Delisle roughly coincides the progression of his course with the progression of paper through the mill from entry to clean up, eventually spending three summers working shifts there.

Observations about processes and his co-workers fill the pages, along with brief, awkward meetings with Delisle’s father who has an office job at the paper plant, but Factory Summers hits its plateau early and never transcends it. Very few of Delisle’s co-workers are anything other than normal working men, and the teenage Delisle is by admission solitary, so as there are few anecdotes it’s left to the processes to provide the interest. They do so for a while, and when Delisle first shows how a vast quantity of excess damaged paper is disposed of it fascinates, but the job requirements are repetitive and what grabs the attention to begin with loses it by the fifth similar sequence. Factory Summers also has a gaping hole of omission. At intervals Delisle drops back to the strained relationship he has with his father, using it as a narrative counterpoint, but this is skimmed rather than explored, and the book would be stronger for a thorough explanation of an emotional issue.

Factory Summers is the work of an incredibly accomplished cartoonist, so the art is something to glorify, especially the scenes of Quebec at night, or lovely little drawings of the factory building itself. Co-workers have life and presence, and the way they’re drawn going about their complex tasks is minutely recalled, as is the complexity of the machinery. It’s that art raising a graphic novel with enticing moments and a melancholy mood, but not quite enough to say.

If you plan to read Of Mice and Men and don’t want spoilers, skip page 81.