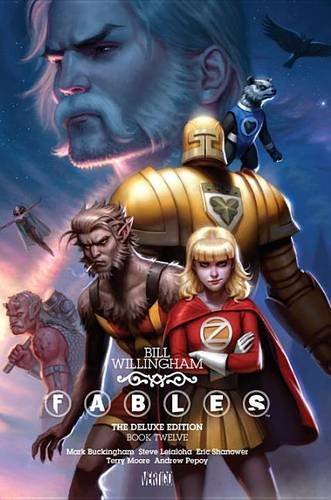 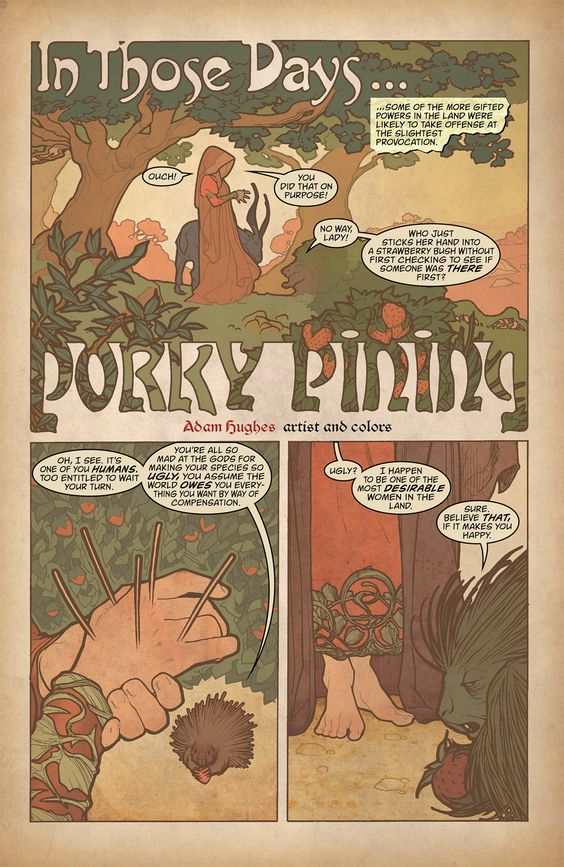 As this book opens the murderous Mister Dark has occupied Fabletown, causing a mass evacuation to a rural farm, usually only home to those Fables incapable of passing for human. Such are the ancient evil resources that Mister Dark’s able to call upon that even the most powerful of Fables are unable to deal with him. Pinocchio, though, has a plan involving recasting a number of them as forms of superheroes.

By the midway point here Mister Dark is no longer a threat, and Bill Willingham has once again managed his frequently applied trick of pulling the wool over our eyes and providing closure from an unexpected, yet perfectly constructed source.

As ever with Fables, the diversions are as compelling as the main stories, and sometimes lead into a bigger picture. That’s the case with Bufkin and friends, trapped and isolated since Mister Dark disconnected them from the remaining Fables, which will continue into Fables Deluxe 13. Here the very precise Eric Shanower illustrates an escape, and those familiar with his other work will be able to hazard a guess as to which realm Bufkin accesses.

Shanower is but one of several artistic greats occasionally subbing for Mark Buckingham, to whom that term also applies. He’s so consistent and excellently imaginative whatever the subject that there’s a danger of taking him for granted. We shouldn’t. Take a look at some of his Jack Kirby homages here. He shines even alongside pages from Adam Hughes (doing his best Mucha – see sample illustration), Terry Moore, and P. Craig Russell, all of whom illustrate short stories. As ever, the book concludes with plenty of preparatory work from Buckingham.

This content can also be located in paperback as Super Team and Inherit the Wind, and the title of the latter indicates the theme of the book’s second portion. Bigby Wolf’s father is the North Wind, and family traits have passed down to Bigby and Snow White’s children. Until this book those children have very much been part of a group, but Willingham now establishes differing personalities. This is cemented by the most timid of the children, Ambrose, being told of a prophecy delivering individual fates for his brothers and sisters, but without allocating a specific fate to a specific child. It’s a clever piece of tension-setting, as some fates are grim, and will play out over the remaining Fables material.

The penultimate story takes a Christmas theme, and Willingham again blindsides us at the point we’re beginning to consider he’s supplying nothing but saccharine. A complete change in tone feeds into both what Rose Red must become, before concluding with a panel seemingly meaningless beyond whimsical charm, yet with great relevance in setting up the next major story arc.

A strength of Fables throughout its run was Willingham’s equal mastery of longer plots and short stories, less common than might be assumed. The book closes with a selection of brief pieces featuring guest artists, among which there’s a real gem illustrated by the team of Zander Cannon and Jim Fern about the magician Kadabra, his achievements, his legacy and his fate.