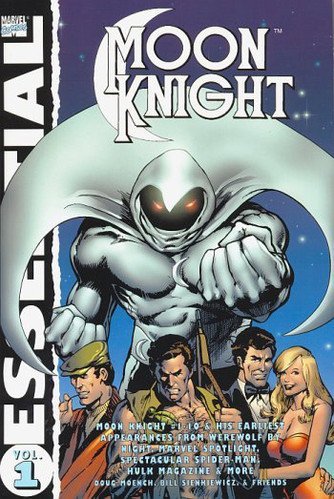 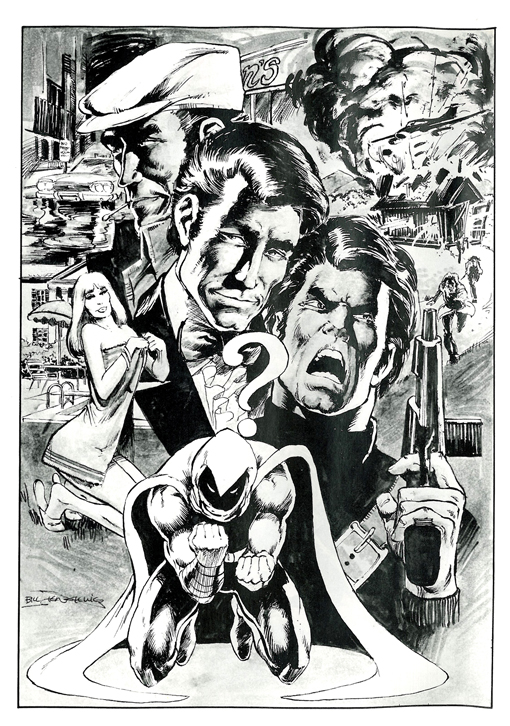 When Doug Moench introduced Moon Knight as a foe for Jack Russell, Werewolf by Night, the Batman pastiche was barely disguised by a white costume, a French assistant, and a career as a mercenary. Something about Moon Knight in an otherwise uninspiring story must have generated a response, as nine months later he was given a solo tryout, at which point Moench applied greater thought to the concept. He came up with the novel idea of Moon Knight maintaining several civilian identities, and explained his greater than human abilities via the effects of being bitten by the Werewolf. Don Perlin’s art is no more cultured, and Moench isn’t yet extending himself.

Perhaps mindful that objections from DC were always a possibility, Moon Knight wasn’t rushed into his own title, but given guest appearances with headliners Spider-Man and the Thing, the latter amusingly written by a genuine Steven Grant. It was one of the aliases Moench had Moon Knight operate under. A young Mike Zeck is the best of the artists assigned, but the stories remain average.

The making of Moon Knight occurs in three stages. The first removed other superheroes from a solo back-up strip in a magazine aimed at adult viewers of the late 1970s Hulk TV show. Moench cultivated a noir crime atmosphere, and developed a supporting cast, primarily girlfriend Marlene. The second marker is Bill Sienkiewicz. Over a five year period Sienkiewicz’s artistic evolution was astonishing. At the start of his career Sienkiewicz was influenced by Neal Adams to such an extent it blinded people to the amazing talent. Many artists attempted to imitate Adams over the years, but none of them managed it as well as Sienkiewicz who was just starting out. The style might be appropriated, but it gives Moon Knight depth, and the ordinary people around him greater personality. Black and white reproduction does no favours to some of Sienkiewicz’s early work, but it’s now available in colour for comparison as Bad Moon Rising, while the more he develops the less the colour is necessary. It’s with the second Essentials volume, though, that he becomes Marvel’s most distinctive artist since Jack Kirby.

Sienkiewicz arrived halfway through an overly complex escalation to a frankly ridiculous villain, but afterwards Moench ups his game, beginning with a damaged killer featuring a thrilling chase sequence. Changing dialogue patterns depending on which personality Moon Knight uses is clever, but leads to daft lines such as “Good evening Marlene, my impish dear!”. The third stage cementing Moon Knight is a regular series in 1980. in which the supporting cast expands further. Here Moench dispenses with the idea of Moon Knight being anything other than a Batman knock-off, but the crucial difference is that his life is one without super villains, as he stars in almost real world crime dramas. There may be masks and disguises, but the people behind them are human. Moench drops the idea of extra strength, but expands the supporting cast, while Sienkiewicz’s art varies according to the inking. The rougher Klaus Janson makes him look far better than the smoother Frank Giacoia, but Sienkiewicz inking himself is best.

Two-thirds of this collection still stands up reasonably well. Some situations may be a little arch, but there’s always an interesting idea behind them, and when that sweet note is hit the results are very rewarding. Better is to come. All this material is also available in the oversized hardcover Moon Knight Omnibus. 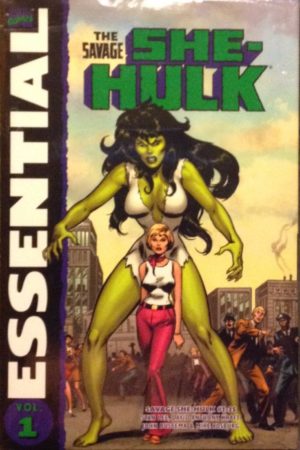