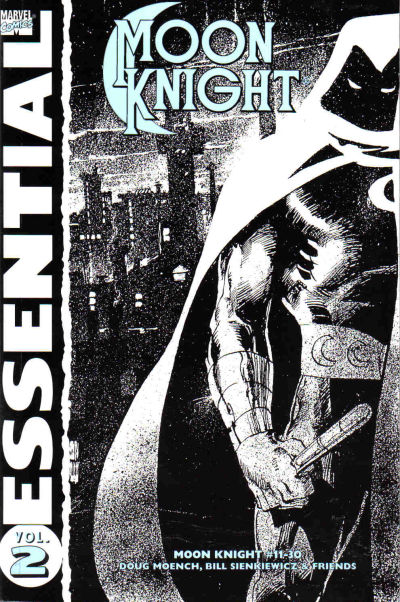 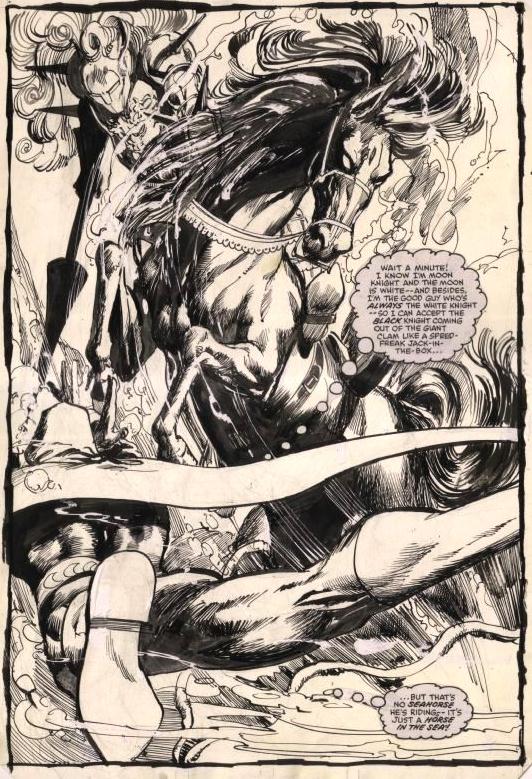 There’s surely not a better collection charting artistic development than Essential Moon Knight Vol. 2, covering Bill Sienkiewicz’s work over an eighteen month period from 1981 to 1983. Volume 1 saw him progressing from a phenomenal interpretation of Neal Adams’ graphic style to developing his own look, but a staid one that continues over the first few stories here. There’s a feeling of Sienkiewicz being constrained by traditional page layouts, but he was beginning to dispense with those altogether. His wild imaginings grow ever more impressive as the stories continue, culminating in the savage ‘Hit It’, where an angry child’s drawings are filtered in to assorted pages beginning with variations of the how the title phrase can be used.

As Sienkiewicz continues to develop, he drags the far more experienced Doug Moench, creator of Moon Knight, in his wake. Moench realises he can produce stories with a greater psychological content, and turns his attention to defining the cracked motivations of his villains with greater depth. Morpheus is a character used twice, a sleep deprived maniac looking for revenge on those who experimented on him. His first appearance is standard from both creators, but his second becomes an extended nightmare miasma. Also recurring is a woman named Scarlet Fascinera, her presence a rare incidence of something missing for the art lacking colour. She’s designed as an enigmatic figure with red hair and always wearing bright red, the colour often contrasting the almost monochrome surroundings of some pages to good effect, and that doesn’t transmit in black and white. While Sienkiewicz’s art looks spectacular, the black and white for the most part an improvement on the colour versions, both Scarlet stories are better experienced in colour in the collections Shadows of the Moon and Final Rest.

Personal tragedy is something Moench deals in far more readily now, to a greater or lesser extent seen in almost every story. It’s there in the disappointed mother, the guilty doctor, the person whose brother dies and the spurned girlfriend, but what resonates is Moench showing the consequences. The tale of rejected war vet Carter Knowles, is very relevant to the second decade of the 21st century in the USA, when the disenfranchised feel they lack a voice. Knowles decides to model himself on Moon Knight, but to create a mirror image in what turns into a beautifully twisted tale of corruption. The supporting cast plays a smaller and smaller part as the stories continue, eventually only Marlene significant, and that’s no problem.

The work of other creators also features, largely as fill-ins and shorts, and while none are poor, neither are they striking, and so in no way to matching the work of Moench and Sienkiewicz. The final stories are Sienkiewicz’s last work on Moon Knight beyond a few covers. He’d added photo realistic portraiture and ornate statues to his folio, and Moench is achieving an almost jazz like free form to his captions: “Sure, crime pays – sometimes. But not when a scrupulously moralistic whacko like this guy Moon Knight is casing the scene”. Appropriately, Sienkiewicz’s swansong is Moon Knight again tackling the Werewolf by Night, in whose title Moench introduced him eight years previously. Spectacular images abound, and this time Moench expands on the moon connecting both their identities. A fantastic, impressionistic final page notwithstanding, it’s not the best work by either creator, but streets ahead of the way this volume started.

An occasional page of smudgy reproduction occurs, but otherwise this is some collection of art and some pretty good stories.