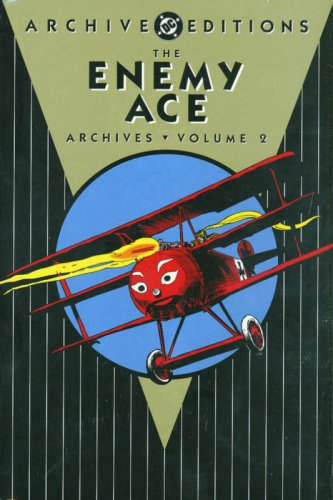 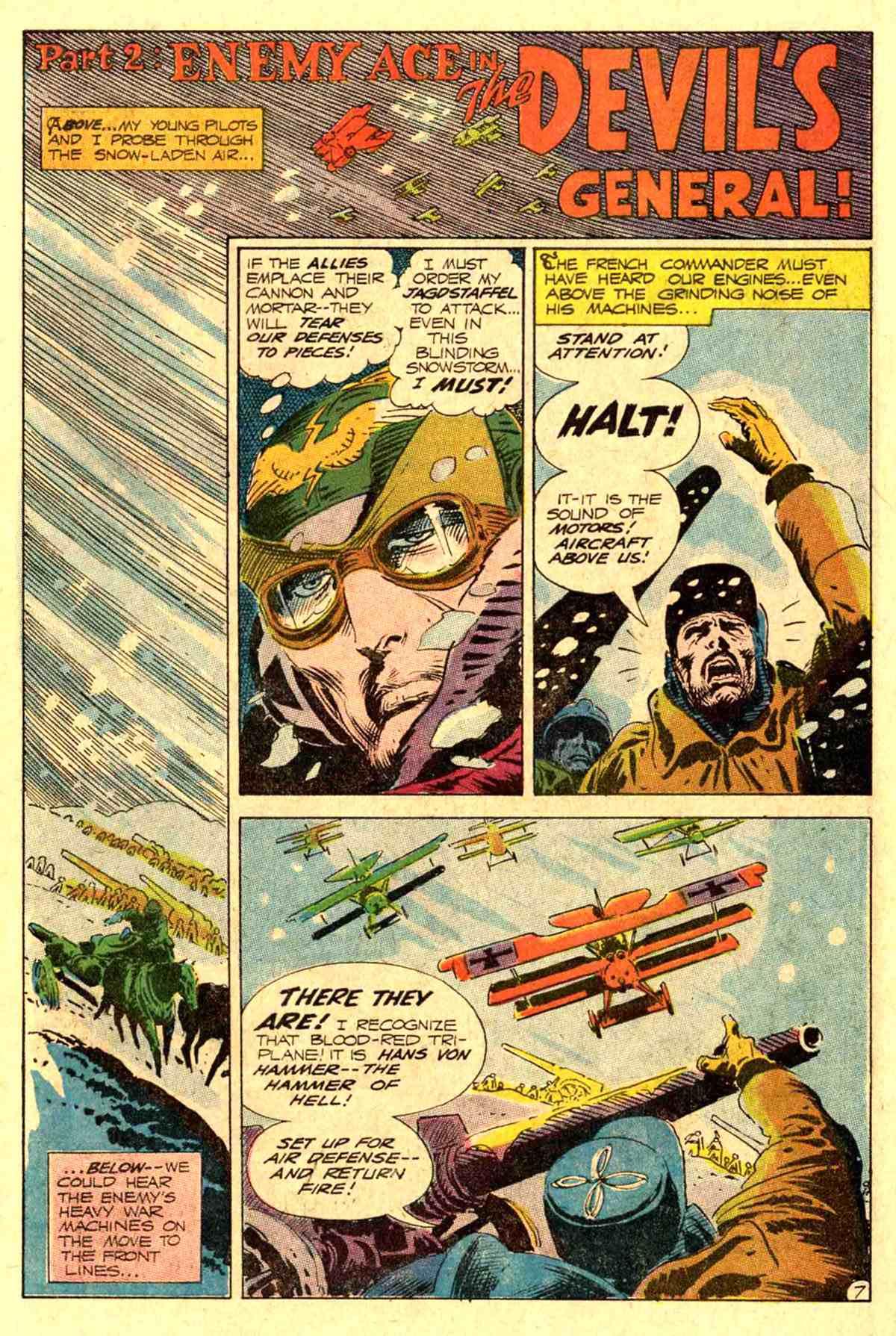 Enemy Ace starred in a downbeat and evocative introductory story, but it took until the midway point of the material printed in volume one for the series to really kick off beyond Joe Kubert’s always fine art. That eventual level of quality is maintained here apart from a distinctly saggy couple of stories in the middle.

When he introduced German World War I flying ace Hans von Hammer in 1965 Robert Kanigher was early in picking up the national mood for anti-war stories. By the time this selection was published, picking up in 1969, the whispers against US involvement in Vietnam had become a clamour, and either following his own muse or in recognition, Kanigher’s stories reflected this. He expands the sequences of von Hammer regretting the young lives he’s led to their premature deaths, and of the novice flyers themselves, although avoids the repetition of the first volume, by permitting some to survive. One good early story has von Hammer removed from the comfort of his plane performing a rescue mission, although Kanigher underlines the waste of life anyway. Contributing to the memorable nature of the strip is von Hammer serving his country from a sense of duty, not any consideration of its expansionist policies, and that’s contrasted in the story of a passionate believer in Germany’s cause.

There’s enough of Kubert’s polished art to satisfy, but he’s not the only artist on display. Early on Neal Adams pencils a strip, although so swamped by Kubert’s inks it’s only the different approach to layouts that reveals him. The orderly elegance of Russ Heath is first seen on stories related by Enemy Ace rather than starring him, which have more in common with the typical war comics fare published by DC at the time, being professional, but jingoistic heroism rather than nuanced gloom. He draws a single von Hammer story very nicely toward the end of the book. The final strips are the work of Frank Thorne, whose loose style greatly resembles Kubert’s, but without copying.

In the previous book the distinctive hood worn by French pilot the Hangman served a dual purpose, and Kanigher constructed several fine stories from him, belying the showy nature of his outfit. Having an English pilot obsessed with St George and wearing armour and helmet in his plane lacks any subtlety, and while the saccharine nature of Enemy Ace falling for a puppy in the following story isn’t as bad, neither is it good, almost lapsing into parody. These are the weak spots.

Thorne illustrated Enemy Ace’s encounter with his more gung-ho American equivalent, Balloon Buster, also occasionally starring in DC war anthologies of the early 1970s. Kanigher effectively contrasts their attitudes, with Steve Savage living up to his name and having no time for concepts of honour where the enemy is concerned.

Kubert himself writes the final strip as von Hammer glimpses the future of flight. The change of writer is in itself its an indication of the future. Other creators, some very well respected, have revived Enemy Ace over the years, and some have done a fine job, but none have managed the near perfect synthesis of Kanigher and Kubert at their best. Kanigher’s writing very occasionally becomes florid, but generally provides von Hammer a distinctive humane and poetic voice, while Kubert is a master of effortless graphic precision and thrills. A few dips occur in this collection, but the better work is peerless, unfurling a perpetually tormented man so talented he’s doomed to continue his hated work until an inevitable death.