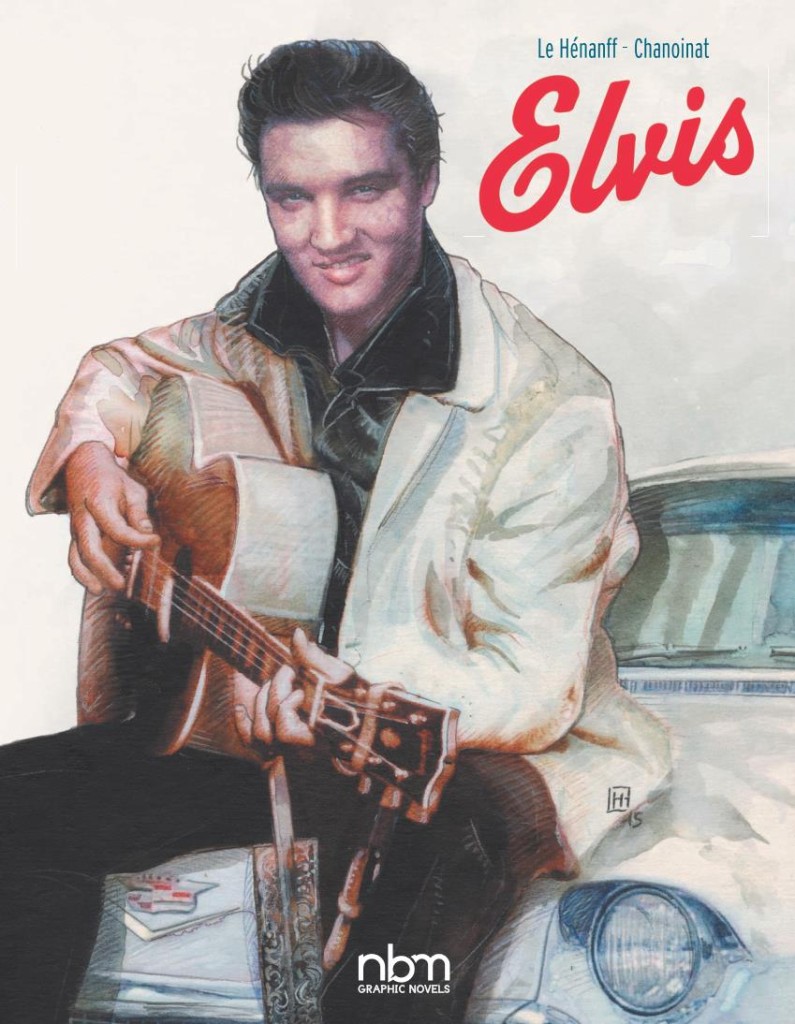 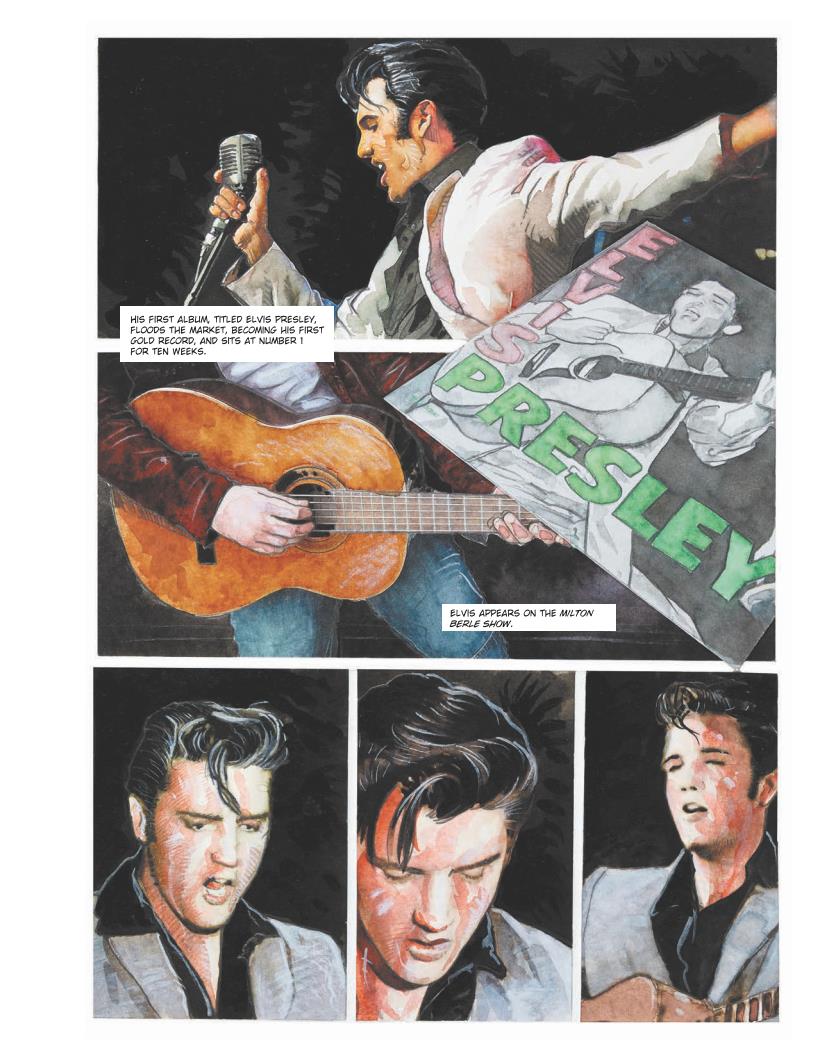 In recent years Elvis Presley has been an increasingly popular subject for graphic novel investigation. In this French offering his early career predominates, and while Arthur Ranson’s 1980s serialisation remains resolutely unavailable in collected form, visually at least, this 2016 offering is the best to date.

Fabrice Le Hénanff’s watercolour style art is heavily picture referenced, but he doesn’t just copy. He combines the visual references into montages bursting with vitality, fades the backgrounds of his street scenes into black and white line art, or applies the merest hint of watercolour. It’s consistently stimulating and at key moments in the book Le Hénanff opens up into spectacular double page spreads. The likenesses are good throughout, not just of Presley at various stages of his career, which would be expected, but of others associated with him. There’s a great work ethic about Le Hénanff, who doesn’t slack off when it comes to folk pictured, but not named in the text, and when crowd scenes are called for the people are there. Best of all is the sense of motion he can convey with static images. On some pages you’ll swear Elvis is swivelling those hips.

Philippe Chanoinat’s script hits all the obvious benchmarks, and looks beyond Elvis himself to the people he inspired, many of the earliest now long forgotten. The pacing, however, is questionable, as is the lack of focus. While prioritising the young, beautiful and dangerous years is the wisest choice, even within that there’s considerable fat that could be trimmed. Those Elvis inspired, or who followed in his wake, occupy four pages, and while Le Hénanff provides a fantastic Gene Vincent, the cost is a wealth of omission. Additionally, do we really need a page to tell us Elvis first played Hawaii in 1956? Or three full pages with a single caption about King Creole? Story pages 1-52 take us to 1962, essentially the first eight years of Presley’s career, leaving only fourteen pages for the remaining fifteen years.

The focus is also resolutely on the USA, ignoring any global impact. While his manager ensured Presley never toured abroad, his overseas success and following was immense. Suspicious Minds is noted as his last US number one single, but he had many others elsewhere. As the book reaches the final stages what’s not being discussed becomes increasingly obvious as the captions become little more than lists parsed with the occasional fact. After spending several earlier pages detailing the courtship of Elvis and Priscilla, their separation is covered in fifteen words. Maybe official sanction for all those likenesses was accompanied by a legally binding promise not to feature anything negative or controversial. If so, it’s led to a beautifully illustrated, but fatally sanitised book.

This is compounded by Joe’s Johnson’s awkwardly literal translation. Given the name, the presumption is that English would be a first language, but it doesn’t read that way: “In 1946 he asks for a bicycle for Christmas, but his parents who truly are very poor can give him only a guitar.” Such stilted phrasing occurs throughout and it’s very distracting.

Le Hénanff is the star of the show here, although even he appears to be losing interest with the meagre offerings of the final pages. Once concluded, there’s a sketch section again reminding us how talented he is before we close the book. It’s only going to be for the art that it’ll ever be looked at a second time.