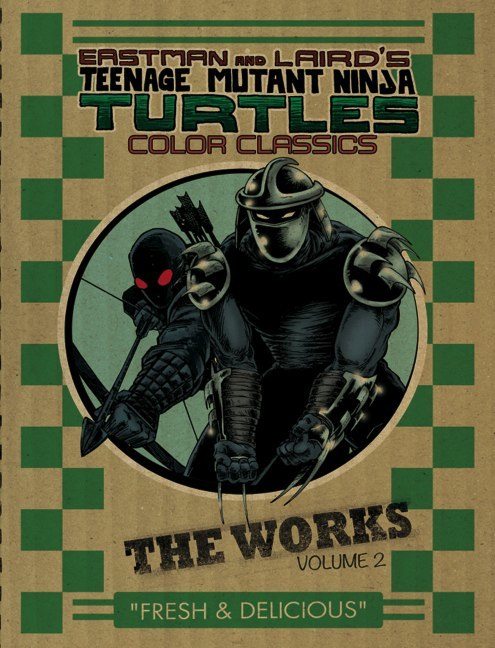 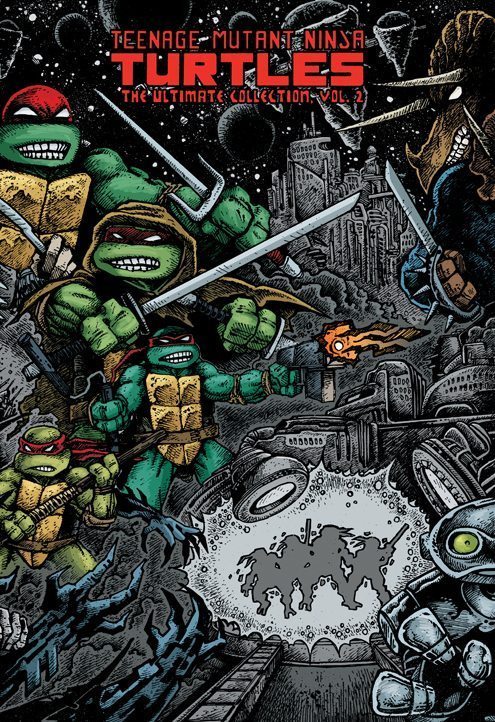 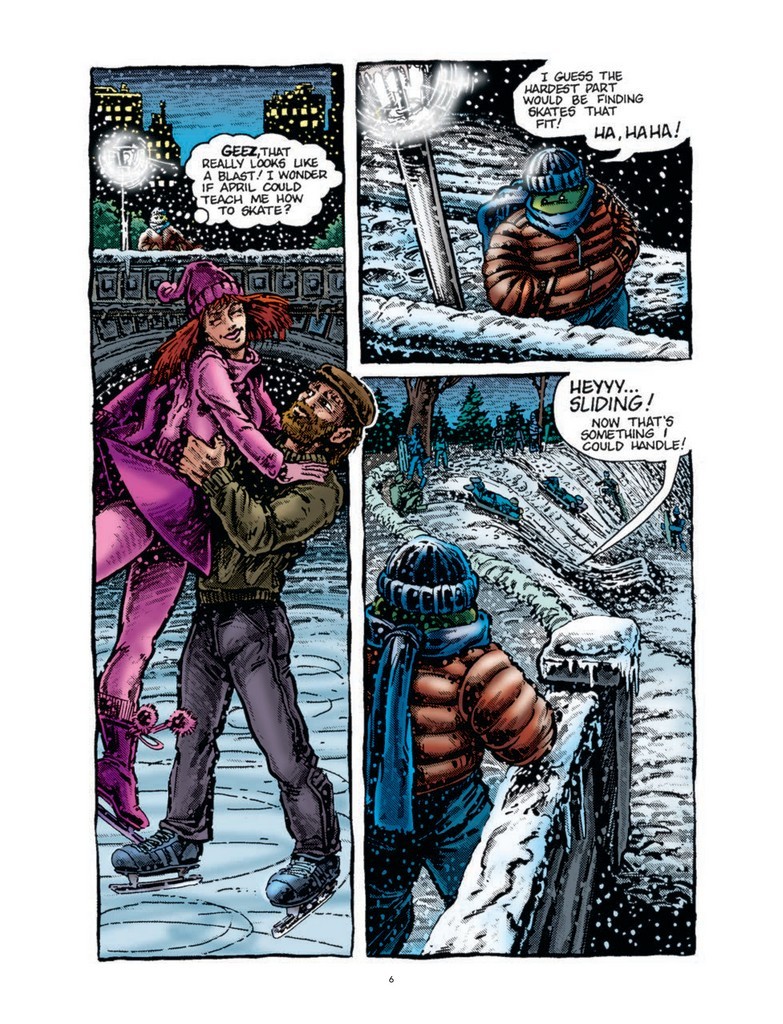 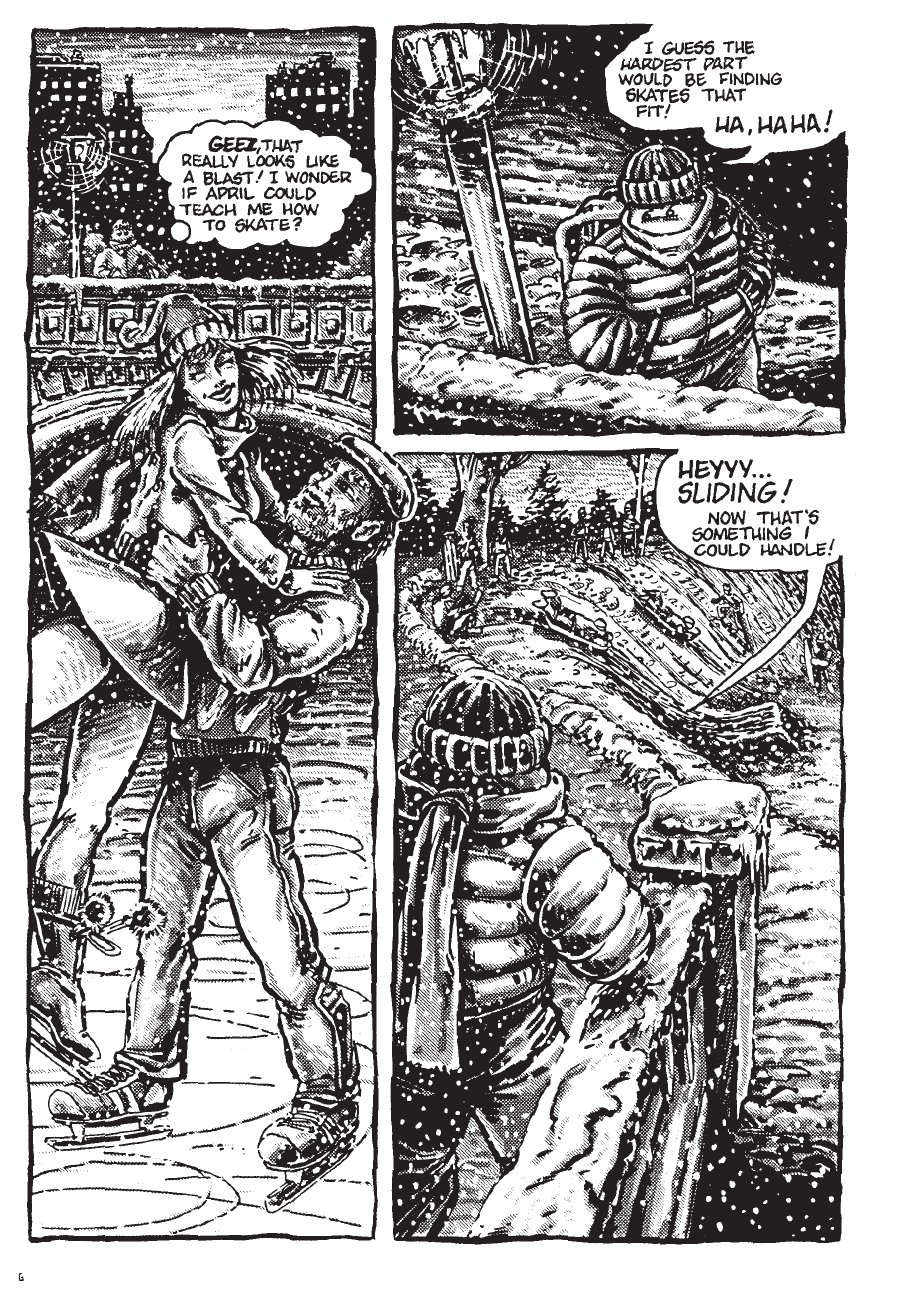 The Turtles and their master Splinter are living in an apartment block owned by April O’Neil since the destruction of their sewer home after the events and outer space adventures of Volume 1. Being among colourful alien species where they were not considered out of place has left them struggling to integrate back on Earh. After a cross-over adventure with Dave Sim’s Cerebus (unavailable in previous TMNT collections) Kevin Eastman and Peter Laird continue to explore this theme with individual looks at Michelangelo, Donatello and Leonardo in chapters originally printed as a micro-series and not to be confused with IDW’s own Teenage Mutant Ninja Turtles: Micros series inspired by these originals. Mike explores Christmas; Donny connects with a young artist named Kirby (homage to Jack Kirby) whose work comes to life, while Leo’s relentless drive to push him-self leads to an encounter with the re-emergent Foot Clan and a shocking revelation that puts everyone in danger. It’s an encounter none of them may survive, including their new allies April O’Neil and Casey Jones (introduced in the previous volume). For those wondering, Raphael’s solo was in Volume 1.

The main component of Eastman and Laird’s success wasn’t brilliant writing, outstanding dialogue or magnificent art. They were great publicists who used their newspaper experience to the full, marketing the Turtles before they even débuted with press-releases to garner interest. They persuaded their local comic stores to sell the first few copies, done mostly did as a favour to young local artists making a go of it on their own. The Teenage Mutant Ninja Turtles became a worldwide phenomenon in just a few years because Eastman and Laird had the good fortune to be surprisingly savvy businessman, producing statuettes and a game to leap-frog off the back of the growing RPG craze led by Dungeons & Dragons. It’s a foresight well ahead of its time, arguably paving the way for independent creators and companies like Image. The meteoric success of the TMNT brand may give the impression that the writing and artistic content was flawless, but it wasn’t and while this is markedly better than the previous volume, it is still very much a project under construction.

While Eastman and Laird handle the bulk of the writing and illustration, they were starting to introduce other artists, Mike Dooney providing the pencil work for the conflict with the Foot. His turtles are a little more robust and for the first time the boys have more consistency to their shape. It is an action heavy affair much better in colour, so The Works might be your choice here. The finale ‘True Stories’ as narrated by April stands out. It’s well drawn and a much better written as well, as Eastman and Laird start to become more in tune with their characters and each other. Black and white suits this sombre storyline more than the colour version, setting the basis for later narratives in both the comic and 2003 cartoon series.

IDW plays heavily on the nostalgia factor of Turtle-mania days, appealing to those who fondly remember these from their childhood. Both collections are really well presented although the coloured The Works eliminates problems the B&W illustration presents in The Ultimate Collection, has a nice stylish look to the colours and is also significantly cheaper. Again it’s a personal preference and you might like both. The team find that trouble just comes to them in Eastman & Laird’s Teenage Mutant Ninja Turtles: The Ultimate Collection/The Works Volume 3.