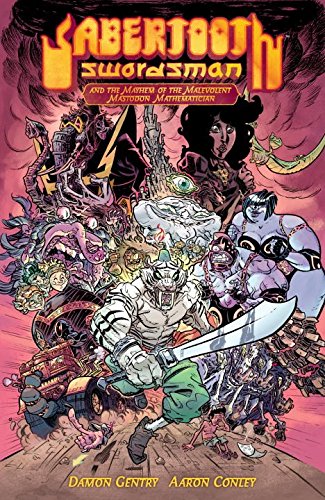 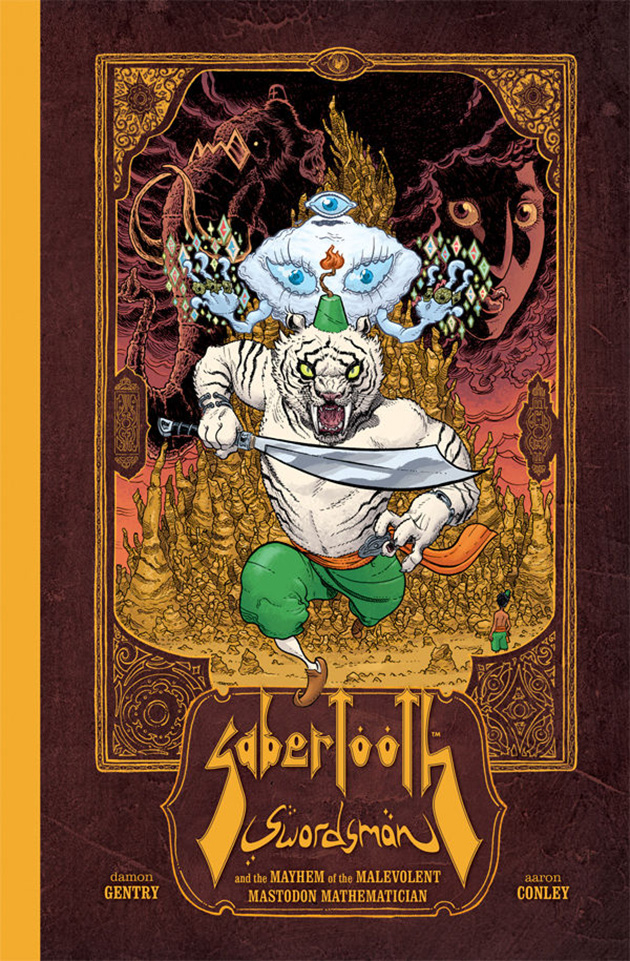 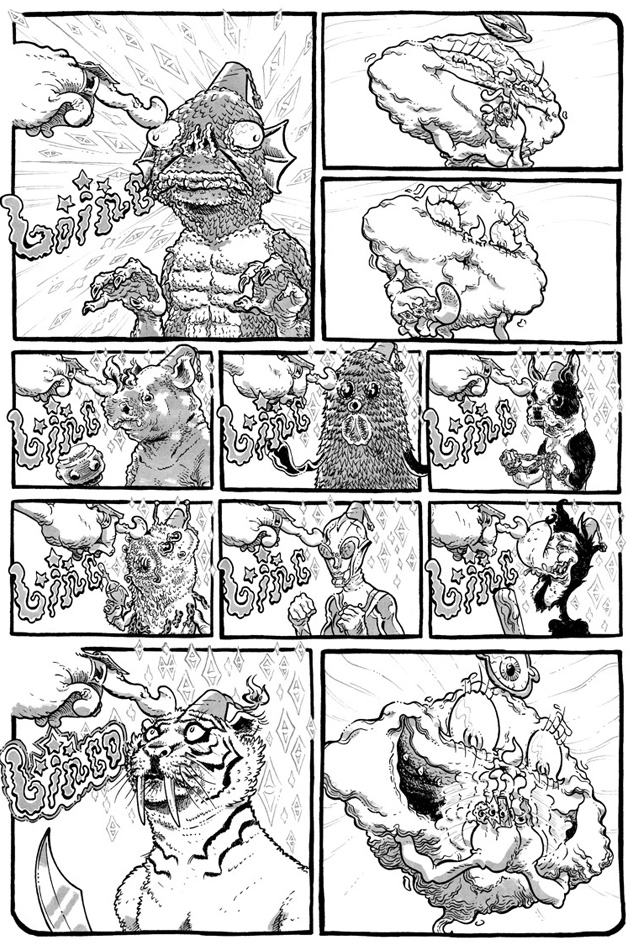 The completely bonkers Sabertooth Swordsman originated as a web comic before being transferred to print. It takes the traditions of fantasy and of sword and sorcery, and while not exactly subverting them, certainly applies a good ribbing.

That this is not your everyday sword and sorcery strip is apparent from the opening page of an elder god leafleting for business. One taker is a dweeb transformed into the Sabertooth Swordsman of the title, although as the sample page displays, this isn’t without a few rejected trial runs. Once transformed and earning top marks in a test of combat we’re on our way. All our hero needs now is a quest, and it just so happens that before his transformation his wife Joleen was abducted by a Mastodon mathematician’s henchmen. Our hero was rejected with a curt “Sorry, we’re all full up on spindly male hayseeds”.

Damon Gentry’s quickfire gags mesh perfectly with Aaron Conley’s cartooning. Conley breaks every rule of comics storytelling with a style that owes a lot to 1960s underground strips, but is effective, confident, ornate and very funny. The level of detail is eye-straining. When the Sabertooth Swordsman slices a monster vertically in half, Conley illustrates a complex mass of squirming internal organs symmetrically from head to groin. He draws every brick of a ruined city and his figures have a bendy quality, as if they’re all stoned.

Gentry pastiches sword and sorcery missions (“Sabertooth Swordsman obtains a questionably useful litter bag”) while subverting expectation. There are few thanks for Sabertooth Swordsman’s heroic deeds and the bathos of mixing 21st century slacker dialogue with the tropes of pre-history is an idea that never tires. He throws in parodies of 1990s WWE wrestlers, the elder god delivers hippy aphorisms (via leaflet), and the elevating succession of monsters are wonderful.

Conley patently loves drawing combat scenes, and to be fair to him, he knocks them out of the park, but while each page surely took days of work, they’re skimmed in a second, making Sabertooth Swordsman a very quick read. Every half dozen pages or so Gentry steps back in with a page or two of comic dialogue and the mayhem begins anew.

There’s an insane comic energy to Sabertooth Swordsman, and even those with no interest in the genre might be tempted once they crack the covers.