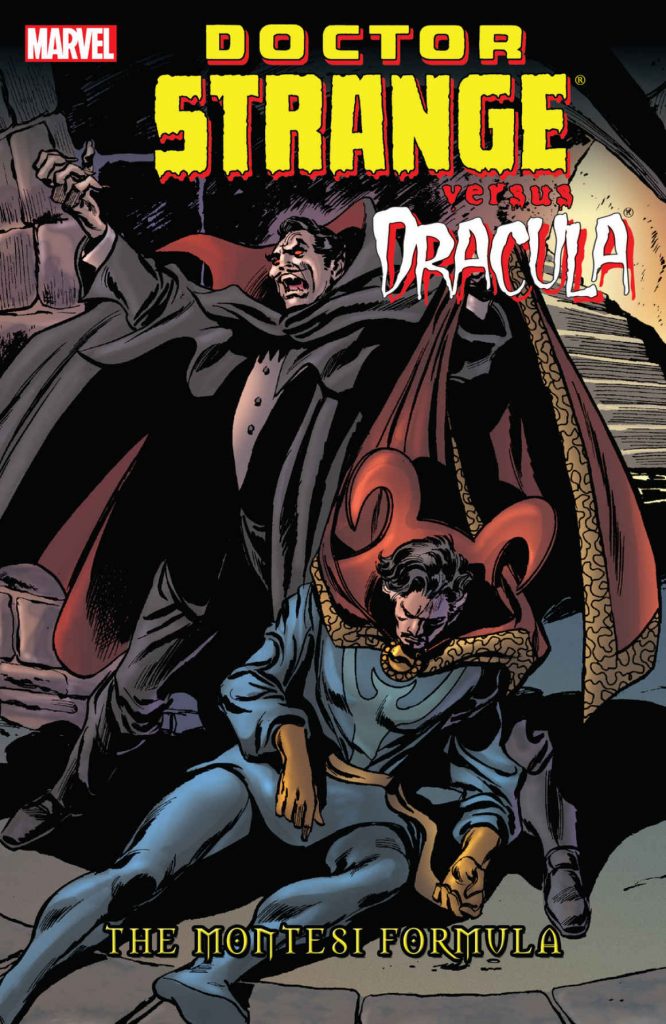 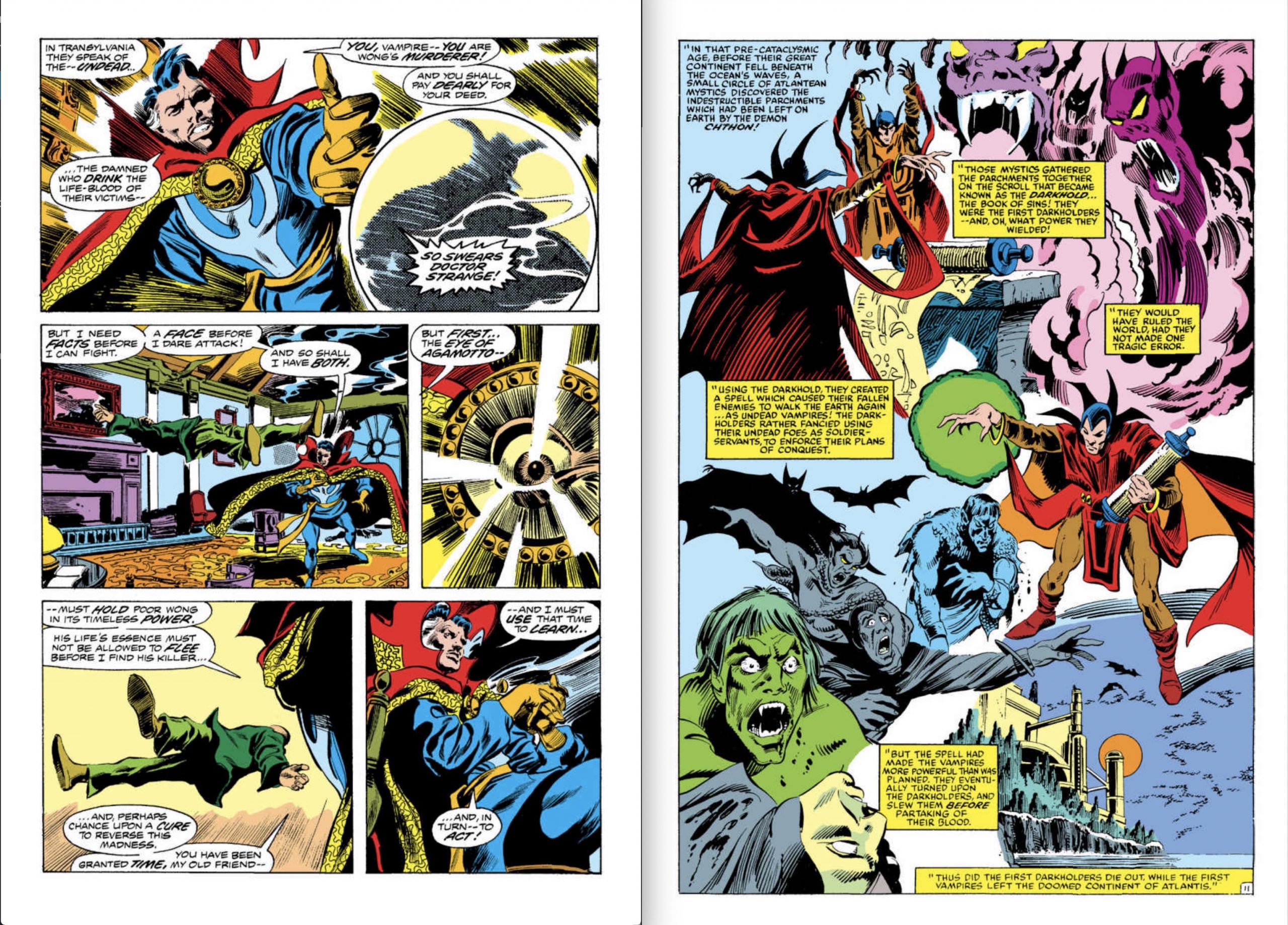 The Montesi Formula is a spell thought to destroy vampires, and contained in ancient tome the Darkhold. It also provides the retrospective title for a five issue sequence from Roger Stern’s 1980s tenure on Doctor Strange. It’s collected here with the first encounter of the characters, in a 1970s crossover with Tomb of Dracula.

Crossovers are as old as Marvel comics, and the 1970s one made creative as well as commercial sense, with both titles drawn by the same art team. The characters also have similarities: powers of flight, transformation, and control over the mind, yet it would seem an unmatched battle – the inter-dimensional Sorcerer Supreme against the self-styled Lord of Vampires. Still, managing such issues is part of the crossover form, and writers Marv Wolfman and Steve Englehart construct this well, with each putting readers straight into the guest character’s point of view. Strange uses his powers to investigate the disappearance of his assistant Wong, retrieving his body with tell-tale bite marks, then entering his mind to see his chance attack by Dracula. Wolfman cleverly uses this device to replay potent scenes from Dracula’s backstory, including his grief at the loss of his mortal wife. Both writers use heavy narration tending to the purple, but that’s the appropriate tone here, and each has mastered the Marvel method of adding whatever elaboration the artwork needs, without compromising the brisk pace. The conclusion glosses over some questions, but hardly spoils a strong story.

The later crossover is welcome in picking up the story of the vampire and his foes, following Tomb of Dracula‘s cancellation. However, the story betrays its roots as episodes of an ongoing series, before these were written with an eye to packaging into collections. The first episode spins a number of sub-plots unrelated to the Dracula story, which is only teased in the last panel. Thereafter, there are separate narratives of Dracula seeking the Darkhold, and co-opting the cult of it’s followers; while Strange, and Dracula’s recurring foes Hannibal King, Blade and Frank Drake (later known as the Nightstalkers), follow the vampire’s trail. The conceptual tidiness of sorcerer versus vampire, is compromised, first by the inclusion of mutant mystic the Scarlet Witch, then the plot device that the Darkhold is stored at her home-from-home, the Avengers mansion. This results in Dracula’s army of cultists, homeless people, and rats attacking the mansion… and many readers’ suspension of belief. However, the threads eventually come together, and the forces of Strange and Dracula finally clash, in a satisfying conclusion.

On this final episode, penciller/inker Steve Leialoha adds ink-heavy murk to the earthly scenes, evoking Dracula’s own series, before shifting into the clean lines and vivid colours of Strange’s magical dimensions for the climactic battle. The other four 1980s episodes are confidently pencilled by Dan Green (pictured right), with elegantly composed pages and panels (pictured), amongst some awkward ones. Terry Austin’s inks are appealing, if mannered.

The Colan/Palmer art team (pictured left) was part of the logic of the original crossover. Gene Colan pencilled every issue of Tomb of Dracula, and launched Doctor Strange into the most immersive supernatural realms since creator Steve Ditko. Tom Palmer’s contribution is most obvious here on the impressionistic realism of the historic settings, in this case New England. It’s breathtaking work, rightly deserving of joint art credit rather than merely ‘inker’. Palmer’s sensitive colouring was ahead of it’s time, though somewhat bright with the better printing.

Two crossovers then: one worthwhile, and one exemplary. This collection is out of print, with prices inflated. However the earlier crossover is available in other collections (connected posts).