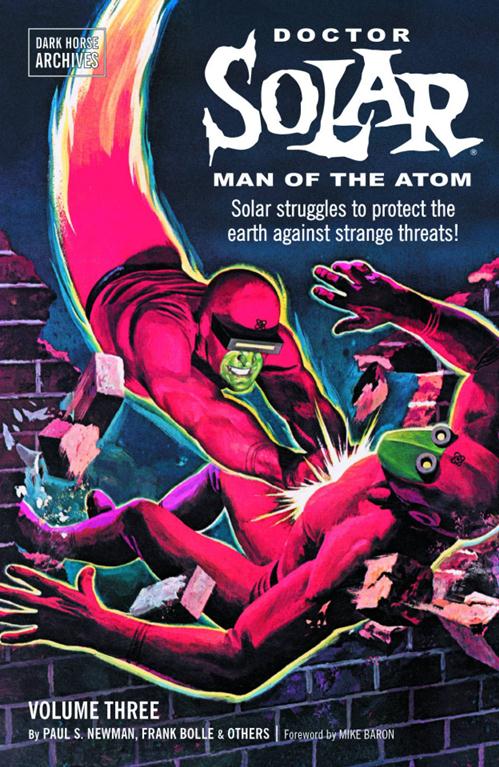 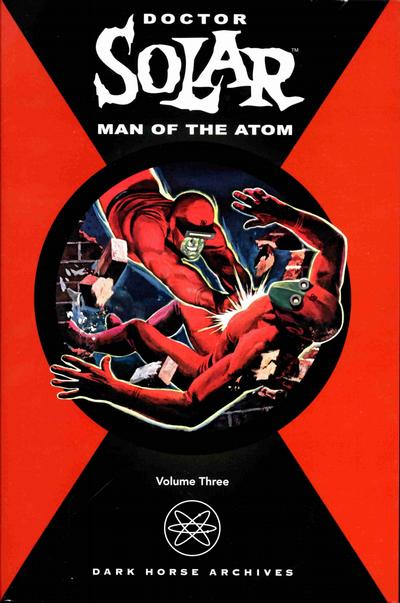 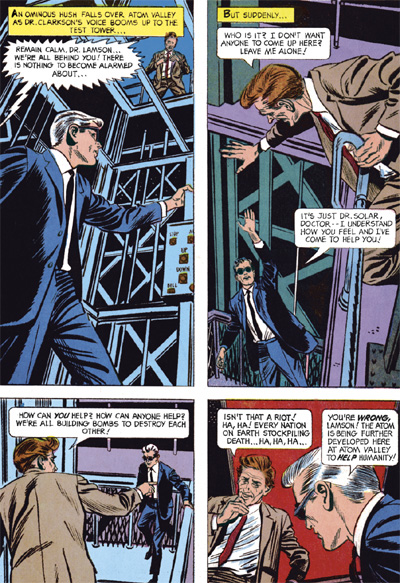 Despite what the credits say, Doctor Solar’s originator Paul S. Newman only wrote the single Doctor Solar story between December 1965 and January 1968 as Dick Wood was primarily tapping the keys. Frank Bolle still provides slick understated visuals for what was one of the most technically innovative and conceptually spectacular series on the newsstands. That changed in 1967 when Alden ‘Al’ McWilliams took over, drawing and inking to the end of this volume, and also contributing the first story to Volume Four.

The atomic adventuring resumes with evil mastermind Nuro’s latest ploy. ‘Doomsday Minus One Minute Parts I & II’ finds Atom Valley boffin Dr. Lamson cracked under the Cold War pressure. He devises a doomsday trigger to fire every thermonuclear weapon at once just to end the appalling anticipation! After failing at every stage to avert armageddon, Solar secures a unique method of saving the day and all the rest to come.

In ‘The War of the Suns Pts I & II Nuro’s espionage delivers the deadly methodology of building miniature suns, enabling him to unleash hell on Earth from close orbit. The solution? Build another sun and have Solar use it to destroy the hellish invader. What could go wrong?

‘The Fatal Foe’ features some traditional monster marauding as Nuro combines weird science and Alaskan volcanoes to build elemental colossus Primo, who rampages towards Atom Valley in ‘Duel to Disintegration’.

Although a diabolical master of mayhem, Nuro’s continued failures grate with his lieutenant Uzbek, who increasingly squabbles with and gaslights the mastermind’s faceless android protégé Orun. With open warfare brewing between flunky and automaton, their fiendish overlord returns to brainwashing in ‘The Mind Master Parts I & II’. He seeks the Man of the Atom’s secret identity, but almost brings about his own destruction.

Bolle’s finale has Nuro modify his metal minion to resemble the Atomic Adventurer and attempts to blacken his enemy’s name and reputation in ‘Solar vs Solar’ and ‘Only One Shall Survive’. The tale ends on a cliffhanger with Solar defeated, trapped and wired into the villain’s secret HQ, providing atomic energy to fuel Nuro’s next vile venture.

McWilliams arrives for ‘Atomic Nightmares Parts I & II’, revealing the hero engineering his escape, but only by inadvertently creating a menace as great as Nuro. Almost as portentous is the debut of Hamilton Mansfield Lamont: a teen super-genius with as many secrets as ideas. As he settles in at Atom Valley, aliens offer a ‘Challenge from Outer Space Parts I & II’, which needs all Solar’s power plus a helping hand from the kid to foil, before the volume closes with an epic clash and monumental upgrade in menace.

‘The Two Lives of Nuro’ has Uzbek sell out, delivering the mastermind’s location to Interpol. Dell/Gold Key infamously never joined the Comics Code Authority, and consequently their titles always had an understandable body count in situations where equivalent Marvel or DC characters would generate the odd skinned knee or sprained ankle in already empty and condemned buildings. Here, as carnage mounts and justice closes in we have ‘The Strange Death of Nuro’.

This charismatic collection offers potently underplayed and scientifically astute (as far as the facts of the day were known) adventures blending the best of contemporary film tropes with the still fresh mythology of the 1960s superhero boom. Enticingly restrained and understated, these counterpoint to the hyperbole of DC and Marvel and remain some of the most readable thrillers of the era.

This was previously collected in hardcover.