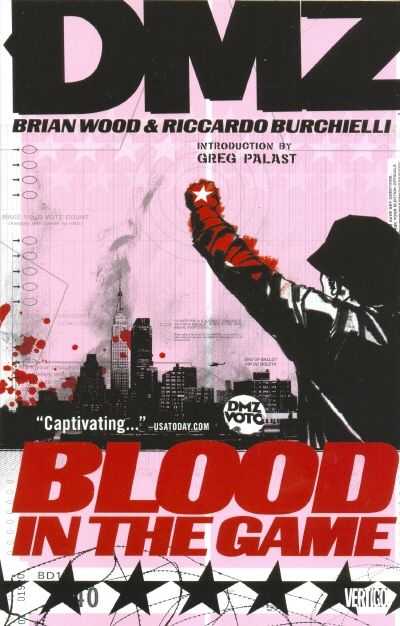 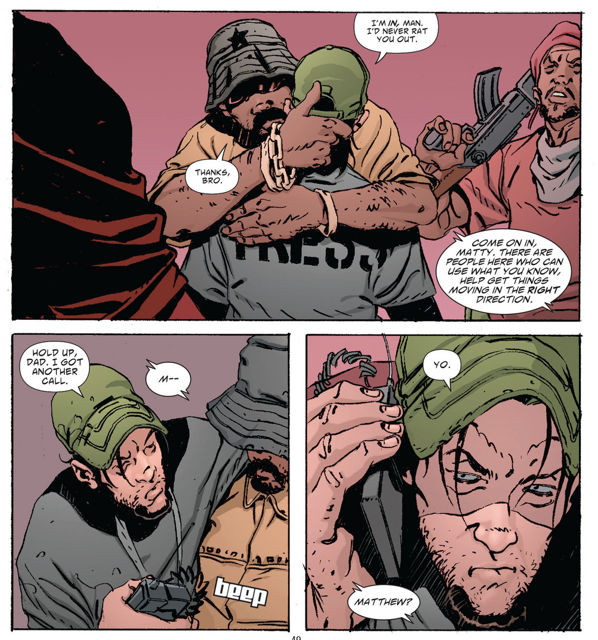 Following the character spotlights of The Hidden War, Matty Roth is returned to the lead focus, as a ceasefire is agreed in order to foster an electoral process in the DMZ. Among those declaring their candidacy is a charismatic leader from uptown Manhattan. Parco Delgado seems to have his head screwed on, asking why so many relevant parties have been excluded in attempts to impose a structure on the DMZ. He makes an equally valid point in asking why Roth’s news coverage focusses exclusively on the area south of 59th Street, and eventually convinces him to lay aside his journalistic neutrality.

It’s this element more than any other in the series that backs up writer Brian Wood’s conception of Roth playing at being a journalist rather than totally accepting the responsibility of a vocation, and the final sacrifice occurs in the manner of any petulant teenager flipping his father the finger. It’s an interesting insight into Roth, who until this point, however naïve he may have been, has been layered as a paragon of virtue. Having undermined himself, Roth is further sabotaged by the arrival of his mother, an imperious political consultant in Jackie Kennedy pink, and he finishes the story in a completely different position from where he started.

As ever, artist Riccardo Burchielli is at home drawing political rallies, assassination attempts or military helicopters sweeping through lower Manhattan, and as the tension rises in the city he never stints on the required crowd detail.

Those who’ve enjoyed previous volumes will probably also enjoy Blood in the Game, and there is much to enjoy, but after a fine opening chapter there are also too many elements whose only purpose appear to be to extend the story. War Powers continues events, and that’s included with this in the hardcover DMZ Deluxe Edition book three.