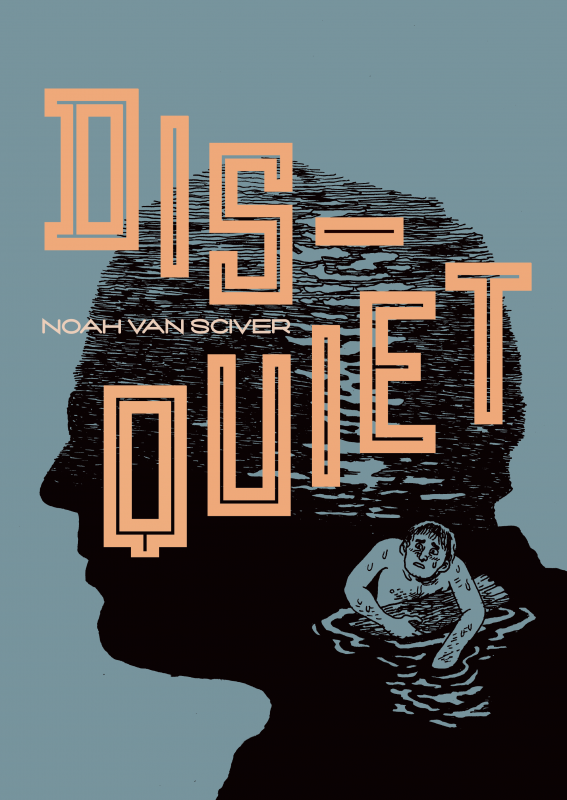 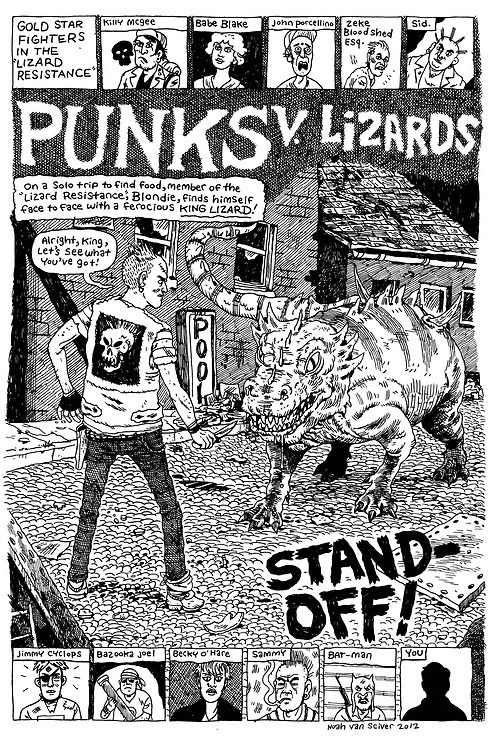 The title Disquiet, pulls together this varied set of shorts by Noah Van Sciver. The introduction, curiously by Van Sciver’s ex, highlights the true life elements in the stories, but he’s evidently mixed things up, changing genders and points of view, adding distancing devices, and fictionalised manifestations of the underlying character stories.

There’s an example of this in the opening (and longest) story ‘The Lizard Laughed’. It’s about a young man coming to meet his father for the first time, and full of questions about why he left. The introduction tells us it’s essentially autobiographical, yet he avoids this being the son’s righteous rant, by establishing his father as the point of view character, and fleshing him out as fundamentally a decent man. The ending strikes a deft balance between dramatic resolution and contrived tidiness.

This first lizard, was simply a motif and rock formation – more aggressive reptiles and rock are the focus of ‘Punks V. Lizards’. It’s a playful piece of creative invention, without laboured explanation. The punks, appear among the few human survivors of the return/arrival/whatever of Tyrannosaurus-like reptiles, scaled to menace, but still go face-to-face with, the humans. At its heart, like ‘The Lizard Laughed’ it’s a story about family relationships, as one protagonist learns from, and, tries to live up to his brother. This could be corny and mawkish, but the incredibility of the scenario, conversely, makes the human drama more credible.

Punk is a useful reference for Van Sciver’s art here. His debut, The Hypo depicted the story of a young Abe Lincoln in period-appropriate pen and ink style, that channelled – and was endorsed by – Robert Crumb. Since then, he’s cultivated a looser, rougher style – its roots may be in the Punk generation’s 1970s-80s wrong-but-right update of underground comix. In particular, it recalls Gary Panter’s style on his Punk everyman Jimbo, perhaps via Van Sciver’s contemporaries like Jeffrey Brown. Its surface roughness, though, belies his skill – he adeptly captures movement, posture and facial expression for punks and lizards alike.

Also at the weirder end is ‘The Cow’s Head’, a mock fairytale. A young girl lives with her impoverished family in a cabin in the woods. She feels unwanted by her step-mother and heads off into the unknown. The fairy-tale elements are absurd – perhaps the cow’s head, and the cheese – signify milk, and so the maternal nurturing she craves.

The other longest piece is ‘The Death of Elijah Lovejoy’, an extended ‘deleted scene’ from The Hypo, that goes from a lengthy prose preamble, straight to the climactic finale. It’s a gripping sequence that communicates the commitment, bordering on folly, of Lovejoy and his newspaper comrades, but doesn’t explore the issues their struggle is about. Ultimately, it’s like seeing the climax of a movie: without the build-up. It’s exciting, but not fully involving.

Most stories though are non-genre, and naturalistic – what in prose would be called ‘literary fiction’ – gentle stories of people leaving relationships, jobs, homes, and cities. They avoid melodrama, and the characters mostly avoid passionate love, hate or anger, experiencing something more subtly uncomfortable – perhaps as the title puts it – ‘disquiet’. Picking up from the introduction, it does indeed read as a composite portrait of the author himself. 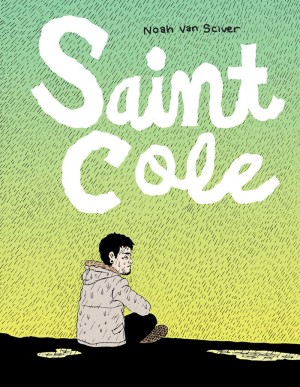