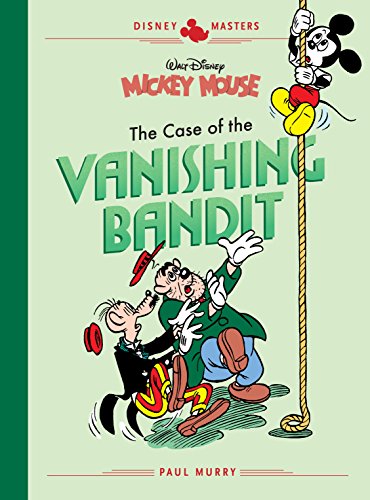 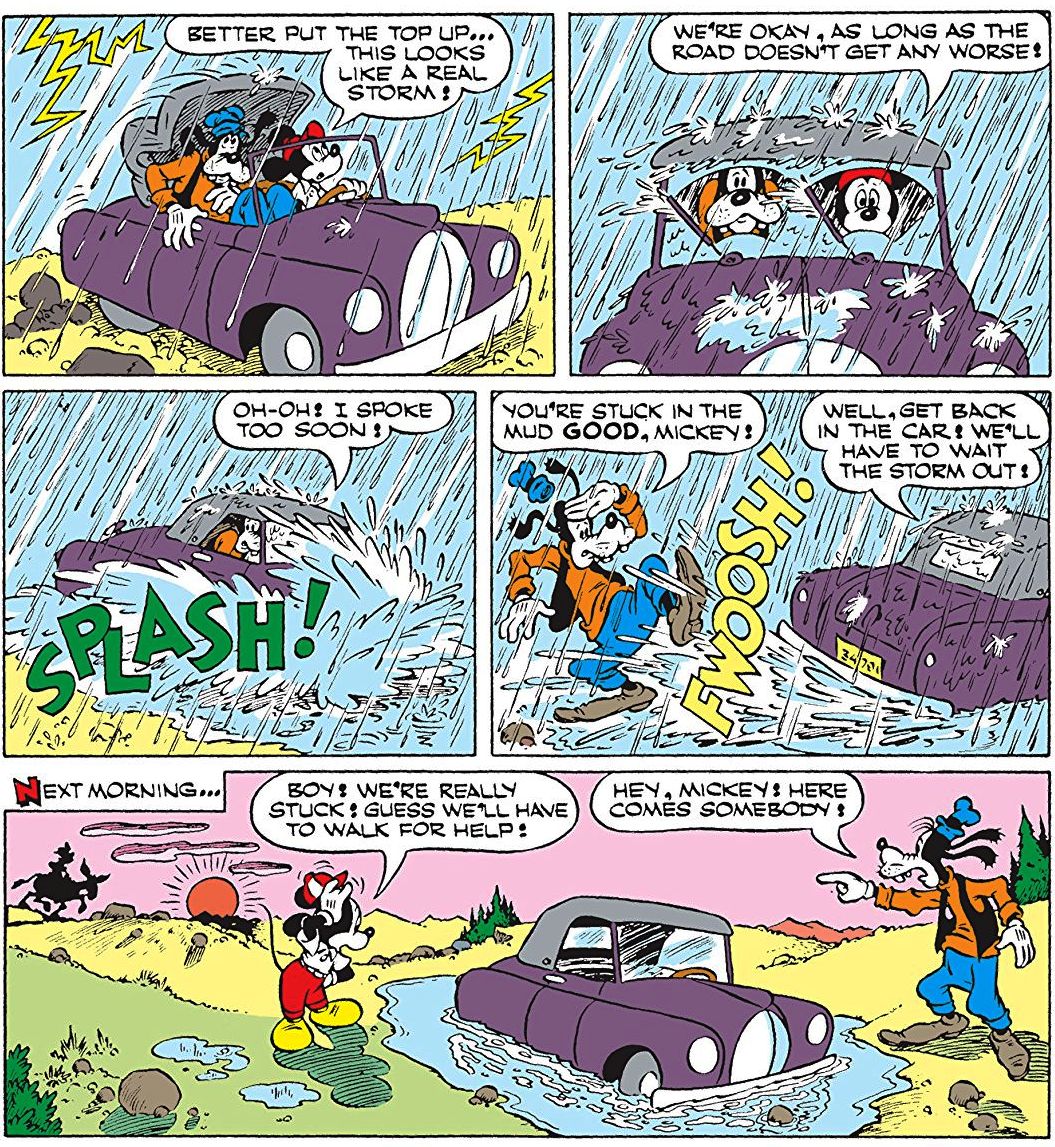 Paul Murry began his Disney career drawing Mickey Mouse newspaper strips before leaving the company for a while. When he returned in the 1950s he was already forty years old and was paired with writer Carl Fallberg, a partnership that would last many years. Murry became a prolific contributor to many Disney titles, and The Case of the Vanishing Bandit collects seven stories illustrated by him and written by Fallberg.

Unlike many other Disney creators of the time, Murry preferred illustrating the short mystery capers Fallberg wrote. They’re wonderfully imaginative, Murry’s artwork progressing with constant little improvements to the cast and environs with each panel. ‘The Last Resort’ has Mickey and Goofy go on a fishing trip to Whispering Pines where fortunes have changed since its heyday. There are ghostly happenings but are they supernatural? ‘The Lens Hunters’ sends the pair over to Africa where they utilise Goofy’s gift for communicating with animals to make wildlife films. Murry brings Africa to life, letting his imagination run at the same time. ‘The Case of the Vanishing Bandit’ pits Mickey against a mystery robber at the request of Police Chief O’Hara, he and Goofy going undercover to clear the name of a circus owner and his troupe. In ‘The Mysterious Crystal Ball’ Mickey and Minnie have strange encounters with a fortune teller, enough to make Mickey suspicious. All these stories have a lovely vibrancy to them, Murry enhancing every tale with an uncanny knack for knowing just when to elaborate his backgrounds and when to simplify them. His cast springs to life with a conspiratory wink or annoyed posture. In this first half he’s better at displaying some angles than others, but his obvious passion for his craft drives him.

After this the Murry/Fallberg team really clicks and the stories become so much better. ‘The Lost Legion’ has Goofy recounting his adventures with Mickey in the French Foreign Legion, where they are sent as agents to foil the plans of a traitor and the ambitious Sultan of Bakdahr. There’s beautiful precision to silhouettes in the desert night, and while it is a Mickey story, Goofy steals the show. In his closing essay, Germund van Gowern credits Murry with Goofy’s development into a leading figure, Murry responsible for Goof’s iconic hand-before-mouth pose. Murry uses him as a comic foil for the traditionally serious Mickey of the American market at the time, Fallberg scripting Goofy like he now sounds in media, gwarshing and yuk-yukking his way through. In ‘The Magic Rope’ Goofy buys a magic flute and rope at an auction, Mickey intent on unravelling its mysteries as they plunge headlong into all sorts of strange adventures. The most impressive story is ‘Riding the Rails’. Mickey and Goofy drive the steam locomotive Penelope, taking Grandma Duck up to see her new Miss Abigail Goldmine as someone tries to stop them. Fallberg sets up scenario after scenario that Murry renders with absolute gusto from fantastic runaway flatbeds to racing Locos set against brilliant landscapes.

Reading The Case of the Vanishing Bandit is a joyous experience and Murry’s art has the curious effect of inducing happiness. Fantagraphics plan to print more Murry/Fallberg work in the fullness of time, but for now there are the fabulous stories of Daan Jippes and Freddy Milton in the fourth Disney Masters – Donald Duck: The Great Survival Test.

This volume is also packaged with the Disney Masters Collectors Box Set and the Mickey Mouse Gift Box Set.