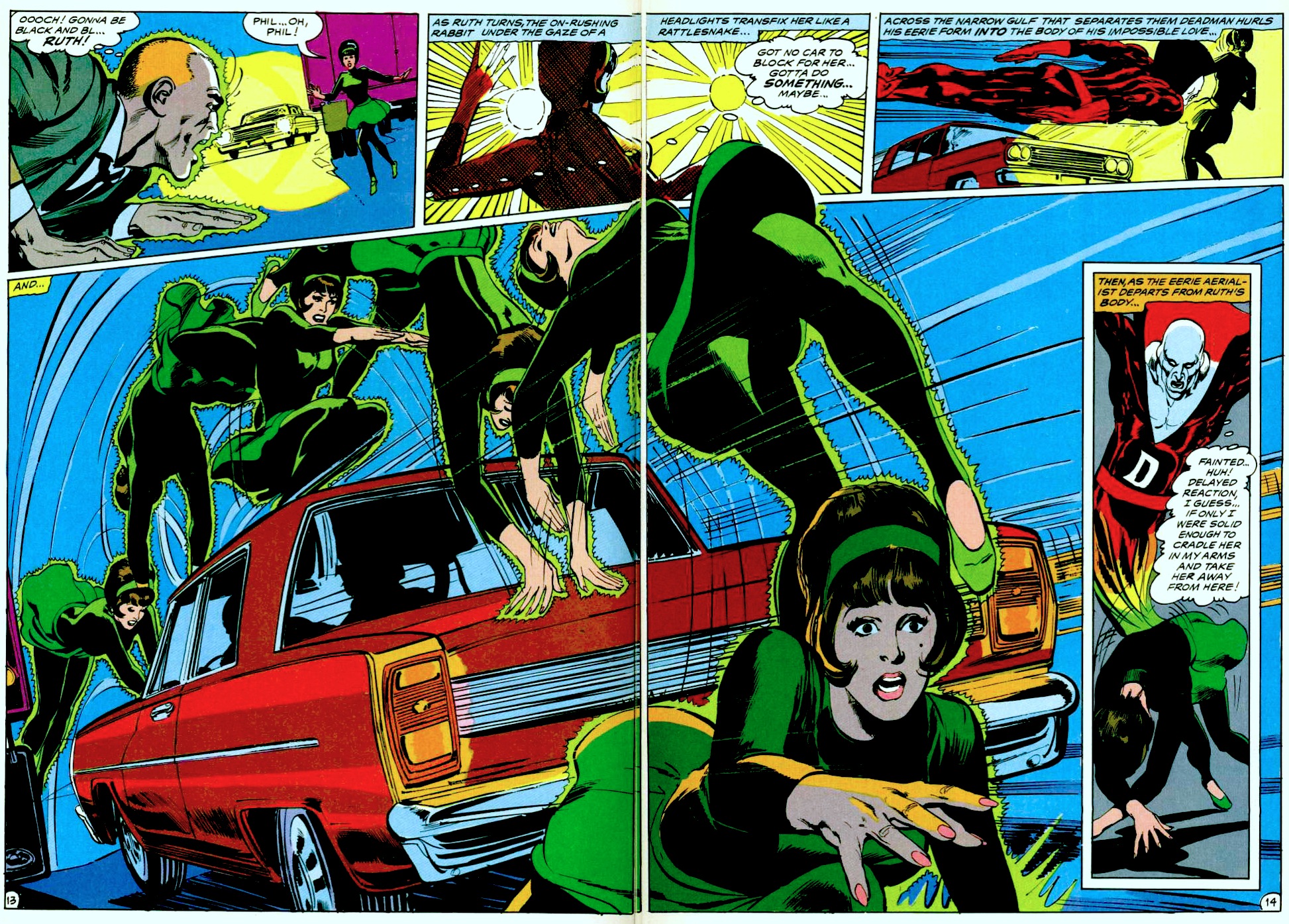 This second volume of Deadman collects stories originally published in Strange Adventures, and then as featured or back-up stories in other titles. This was the first series of comics to feature the superhero art of Neal Adams before he became a major star with his work on Batman and Green Lantern/Green Arrow. Deadman is one-time circus acrobat Boston Brand, who is shot mid-act. His consciousness survives death and his distinctive costume is now his permanent identity as he’s given the power to inhabit anyone’s body and control it as if it were his own. He will use these abilities to track down his killer.

The ingenious premise was very similar to a television series that was a big hit from 1963-1967, The Fugitive, in which a man wrongly convicted for a murder he didn’t commit, escapes custody to find the real killer. It allowed for stories to be set in any location and with a different cast in every episode. During his life Boston Brand had made a lot of enemies so Deadman had to wander far and wide, eliminating every suspect he thought to be his murderer and then going on to the next with some new clue to track. Even though the stories themselves are quite dated now, and much of the dialogue is very corny to modern ears, Adams’ extremely vivid, pop-art style page layouts and dazzling figure-work more than make up for it. It’s easy to see how he would influence a generation of comics artists, and by the standards of the 1960s this work must have hit the somewhat staid DC set-up like the proverbial bomb.

The stories in this volume feature Deadman starring in a few other comics besides his own. He meets Batman in a fast-moving team-up written by Bob Haney, then later he appears in a story featuring Aquaman. Neal Adams takes over writing the strip as well as drawing it. Boston Brand’s twin brother Cleveland appears on the scene and wouldn’t you know it, takes his place in the circus too. And maybe his place in the heart of Lorna, Boston’s erstwhile girlfriend. But does this mean he’s also going to take another bullet? The identity of the murderous Hook is revealed as Deadman tries to prevent his brother’s death and it doesn’t give Deadman the closure he expected, but then how could it? The conclusion of Deadman’s search also introduces the Sensei, deadly leader of the League of Assassins who would go on to be quite trying foes for Batman.

Adams ties up a few loose ends, points the character in the direction he thinks he should go, and this volume comes to an end with no real expectation that there would be any more appearances by Deadman. And for a while, there weren’t. But a character this interesting wasn’t going to stay dormant forever, and there is another book collection of his continued adventures as a guest star alongside Batman, Superman and the Phantom Stranger: Deadman Book Three.